Inspired by Anthony Bourdain even while mourning his demise 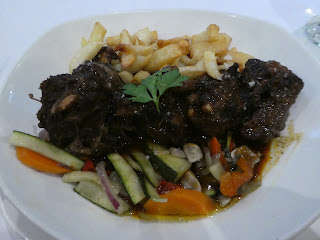 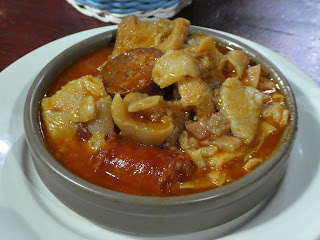 The Spanish eat tripe too! 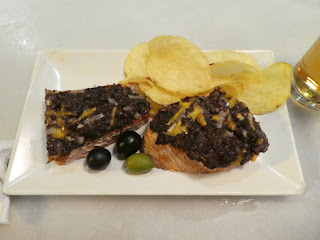 Anyone else up for morcillo (blood sausage) canapés?


A couple of hours ago, I found out that one of my heroes has not only died but committed suicide.  Anthony Bourdain has given me so much inspiration and joy along with entertainment.  He led me to have memorable meals at a number of dining establishments, including Tung Po and the now sadly defunct Tai Po branch of Yat Lok here in Hong Kong, Muthu's in Penang, and Koyoshi Sushi in Osaka.  Watching his shows made me want to follow in his footsteps and head to many parts of the world, including places as diverse as Vietnam (a country he seemed to genuinely love) and Amsterdam (which an episode of The Layover made really enticing).


I loved that Anthony Bourdain was able to appreciate both "low end" and "high end" foods, and that he seemed so happy whenever he was in Asia, eating Asian foods.  I also got a major kick out of his sharing my love of street food, "tube food" (including blood sausage and liver sausage as well as more "regular" types of sausage) and "nose to tail" eating, and making it come across as "cool" rather than "gross".


And while I haven't actually watched any of his Spain shows, I still felt like I was following in the intrepid and enthusiastic traveller's footsteps there as I did such as make a point to try a variety of foods and eateries (all of them sans reservations) on my travels in that country as well as try to look at the country and society from the viewpoint of a traveller interested in delve deep into it rather than just scratch its surface -- the way I reckon he would.

On the culinary front: I made sure to go beyond just eating jamon while in Spain (though it's also true that I did eat quite a lot of it -- Serrano, Iberico and even Iberico de Bellota) and trying a lot of local and regional specialties.  Having done some research beforehand, I knew that the Spanish eat a lot of sea creatures that many associate more with Asian culinary traditions (including razor clams, squid and octopi).  Ditto re eating animal parts such as tripe, cheeks and tails!  So when I saw such items on the menu, I would readily and happily order and eat them -- sometimes to the shock of my German friend, and often to the appreciation of the Spanish restaurant staff.


I know there are people who see eating such items as stemming more from a dare than genuine expectation that one will find them delicious.  In all honesty though, I enjoyed eating rabo de toro (bull's-tail stew) and the Spanish version of blood sausage (morcillo) so much that I ended up happily ordering and eating them more than once on this Spain trip along with pimientos de Padron (the Russian Roulette of green pepper dishes!), gazpacho (so refreshing on hot days!) and, yes, platters of jamon (sometimes also with cheese but often just alone)!


And, like Anthony Bourdain, I regularly washed the food down -- or, should I say paired them(!) -- with alcohol: more often than not straight beer but also sometimes clara con limon (the Spanish version of British shandy or German radler), cava (Spanish sparkling wine) and, in one instance, a generous pour of gin and tonic.

Returning to Anthony Bourdain: The way he's left this world has made it so that my thoughts and views of him will now forever be tinged with tragedy.  At the same time though, I have little doubt that this man who I never ever had the privilege of meeting, yet feel like I've had many conversations and experiences with over the years, will continue to inspire me when I travel, look at food and so much more.
Posted by YTSL at 11:59 PM

I've read quite a few online tributes to Anthony Bourdain, but yours is one of the best. I thought his worldiness and personality, which he shared with millions, would create a protective firewall against depression and other elements of self-destructive darkness that can afflict anyone...Yet he left us with some memorable travel narratives. The last two episodes of Parts Unknown on Hong Kong (with C. Doyle) and Berlin were good. Among my personal favorites are No Reservations Penang and Parts Unknown Okinawa, which introduced me to an interesting island culture off Japan that I was totally unfamiliar with.

Thanks for sharing. I recently re-watched "No Reservations: Penang" and he seemed so very happy when in my home state as well as genuinely love the food he was eating. His enthusiasm along with his team's excellent research makes it, as with you, one of my favorite episodes.

Something else I really like(d) about Anthony Bourdain was how generous he often was to share the limelight with people. I especially enjoyed watching him hanging out and eating with his Vietnamese friend Linh and staffer-friend Nari Kye.