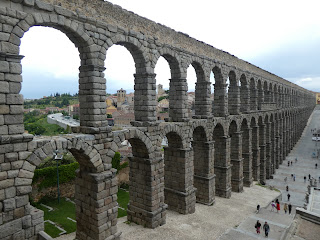 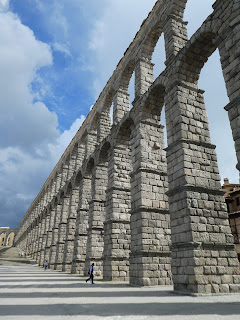 The Segovia Aqueduct is a truly monumental ancient structure 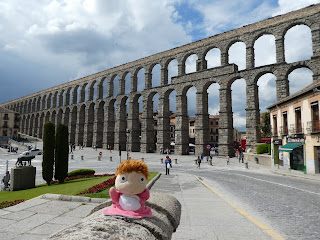 Puppet Ponyo posing in the vicinity of the 2,500 foot long and
100 foot high exposed section of the 2000-year-old aqueduct
Although I've yet to visit Rome (or, for that matter, any part of Italy), I've come across a fair number of Roman structures over the years while travelling in various places that used to be part of the ancient Roman Empire.  In England (where I spent a fair bit of my childhood), I was shown surviving fragments of London's Roman City Wall in the British capital, saw more Roman ruins in York (which was founded by the Romans in AD 71), visited the Roman Baths that gave Bath its name, and walked along sections of Hadrian's Wall in Carlisle.
In Trier, Germany, I spent time atop a fortified Roman gate, amidst the ruins of imperial baths, inside the massive confines of what used to be an imperial throne room and exploring the site of a vast Roman ampitheater.  On a visit to Istanbul (during which the camera I had with me sadly went kaput on my first evening in that Turkish city), I came across the physically impressive Valens Aqueduct completed in the 4th century AD.  And in Segovia, Spain, I came across an even older watercourse constructed by the Romans, whose famous exposed section stands at the heart of the city and is the number one symbol of a wondrously picturesque old city.
An easy day trip from Madrid by bus or train, Segovia is one of those places I wish I could have spent more time in.  With not enough time to see and do everything that I had wanted to see and do in that beautiful historic city, I ended up giving one of its major attractions a miss -- even while being unable to resist spending quite a bit of time staring in awe at the large exposed section of its massive Roman aqueduct and admiring it from a number of different angles.
There's no getting away from the monumentality and great age of the structure but what's also really amazing about the Segovia Aqueduct is that it functioned for so many long, providing water to the city for close to 2,000 years, from the first century AD through to the mid 19th century.  An engineering as well as architectural marvel, its incredible nature is further cemented upon realizing that the colossal granite blocks of the exposed bridge section of the aqueduct are joined without the use of mortar or clamps and are held together, instead, by balancing forces according to technical guidelines laid out by a Roman architect cum engineer in a guide he wrote in 15 BC!
On an aesthetic note: it's astounding that something so functional can also be so beautiful.  And when gazing at something like this, one can't help but think that certain of the ancients really could/can teach contemporary folks (including many architects and engineers) more than just a thing or two!
Posted by YTSL at 10:26 PM

Cemented in the absence of cement. Heh.

Your Spain blogs continue to reveal the deep cultural, architectural and historical depth about this country...And these wide angle shots of the aqueduct, with diminutive figures of people below, put one into the traveler's viewpoint...Puppet Ponyo always looks so wonderful like a dedicated and faithful travel partner-family member. I really think she merits a bonus vacation at a later time - perhaps something along the line of a laid back stay somewhere on the Seto Inland Sea.

I'm glad someone caught that pun! ;b

Thanks for your continued appreciation of my photos and, of course, Puppet Ponyo! :)