If I were to choose one place in Spain that I absolutely had to see while I was in the country, it would have been the Andalucian city of Granada's UNESCO World Heritage-listed Alhambra.  And if there's one section of the palatine hilltop city that was the last stronghold of the Moors of Iberia which I would never be able to forgive myself if I missed out on spending time in, it would have been the Palacios Nazaries which was designed to resemble a veritable paradise on earth and really does come across as a extraordinarily exquisite space.

My German friend concurred, and so much so that she booked us tickets for the Alhambra months in advance of our Spain trip which required us to be outside the Palacios Nazaries when it opened for the day at 8.30am.  Although some might see this as a rather anal move, our reward for getting there bright and early was our getting to wander around this shining jewel in the Alhambra's sizeable crown before it got really crowded, with the added bonus coming from our fellow visitors appearing to be awed to the point of silence or, at least, struck with a sense that it was better to whisper or talk in low tones rather than at a louder volume while we were within the Moorish royal palace's beautiful walls... 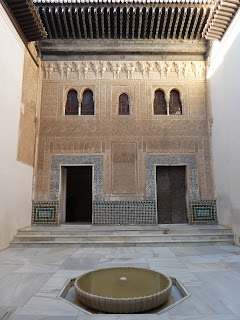 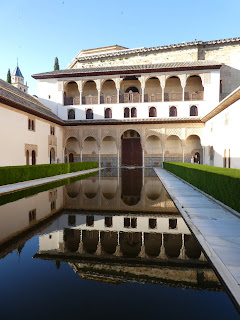 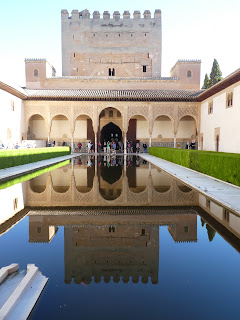 Photo taken from the other end of the courtyard,
half an hour later (and after it got more crowded) 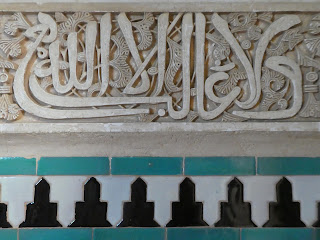 The phrase "only Allah is victorious" is repeated 9,000 times
in Arabic calligraphic script throughout the palace 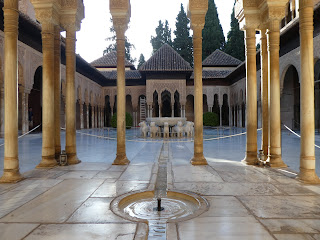 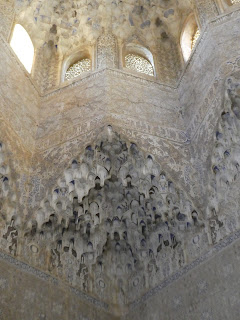 Some of the incredibly intricate stucco work
in the palace resembles stalactites! 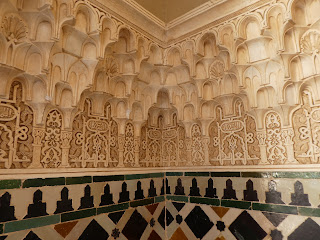 The talented men who worked on this largely 14th century
palace complex deserve to be called artists, not craftsmen 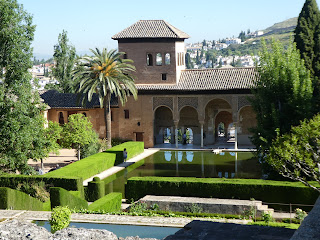 If there were no limits to the time I could spend in the Alhambra,
I'd have happily spent more time in the Palacios Nazaries' idyllic
Partal Gardens which were built upon the ruins of an older palace...
Posted by YTSL at 10:04 PM