The glory that is (was?) Cordoba's Mezquita (Photo-essay)

While planning our Spain trip, my German friend and I separately drew up lists of other towns and cities besides Madrid (where we already had decided that we'd fly into) that we wanted to visit in that country that I had previously never set foot in and she had only been to once before.  Given our shared interests in cultural heritage and diversity, it wasn't entirely unexpected that we both wanted to spend time in Andalucia, with Cordoba and Granada being cities we agreed that we simply had to include in our itinerary.

One of those places with a much storied past, Cordoba has a history traceable all the way back to the Bronze Age.  There's no doubt about its main draw for both my German friend and myself though, and the Mezquita that's at the heart of its UNESCO World Heritage-listed historic center -- and, in fact, was declared a UNESCO World Heritage site in its own right, with the inscription being expanded to include the area only a decade later -- was where we headed straight to after arriving in town by train and depositing our luggage in lockers at the bus station next door (since the train station doesn't have any).

Built in the 8th century, over the remains of a Visigoth basilica, after the city and its surroundings came under Muslim rule, that which also is known as the Great Mosque of Cordoba was expanded upon over the years, and reached its present dimensions -- whose total surface area is exceeded only by Mecca's Holy Mosque as far as Muslim religious buildings go -- in the 10th century.  An unmitigated architectural marvel, the Moorish monument was turned into a Christian cathedral in the 13th century and additions were made to it, notably at its center, that have turned it into an artistic as well as religious hybrid whose older, Muslim parts I frankly think are aesthetically superior to the newer, Christian sections... :S 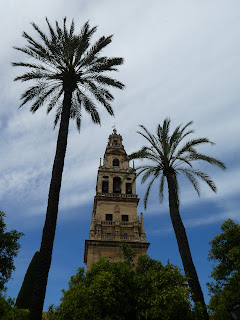 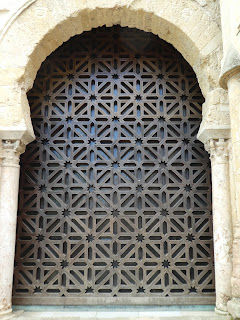 So many design elements catch the eye at the Mezquita 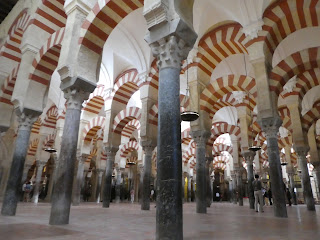 The sight of the arcaded hypostyle prayer hall, with its
856 columns that appear to stretch into infinity,
is one that makes the jaw drop and takes the breath away 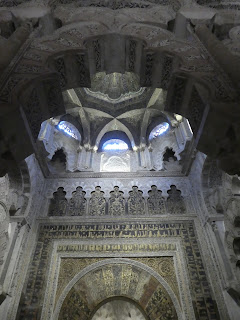 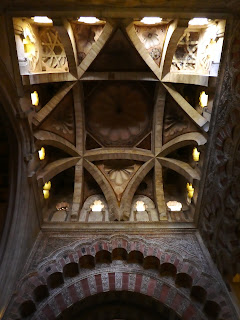 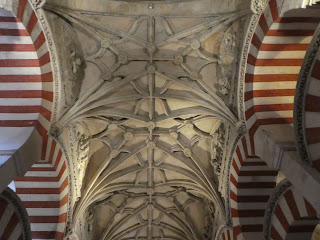 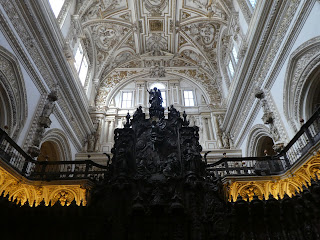 The 16th Renaissance cathedral nave inserted into the Mezquita's center
can make for a visual shock and, to my mind, overblown eyesore 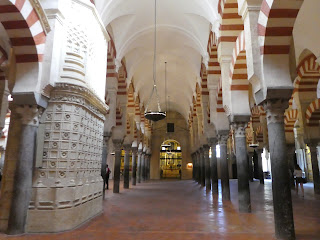 The glory that was shines through amidst later developments
Posted by YTSL at 11:57 PM