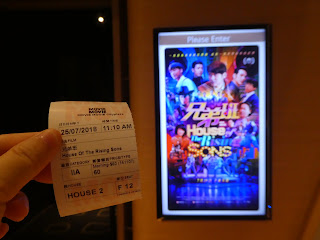 When a group of young men got together back in 1970s to make music in an upstairs room of an old Hong Kong shophouse, I'm sure they harbored dreams of becoming professional pop musicians some day.  On the other hand, I'm pretty sure that the quintet who went on to become known as The Wynners (after initially performing as The Loosers!) never imagined that they'd still have active careers and a strong fanbase in the second decade of the 21st century, and that a film about them -- directed and co-scripted by one of the band members, no less -- would not only go on to be released in Hong Kong cinemas but actually have its world premiere at a prestigious New York film festival!
A nostalgic ode to their youth, shared love of music and enduring friendship, House of the Rising Sons obviously is targeted to the fans of The Wynners but still can entertain those who can't tell lead vocalist Alan Tam from co-lead vocalist, rythm guitar and keyboardist Kenny Bee (both of whom have starred in a good number of movies) or know anything about bassist Danny Yip, lead guitarist Bennett Pang or drummer Anthony Chan.  And although the actual Wynners do appear in the movie, they are portrayed by others for the bulk of this biopic which focuses on how they got together and the travails they underwent together and individually before achieving success -- and, in the case of two of the group, mega stardom -- which, ironically, threatened their happiness for a time.
In view of his having such a major role behind the scenes of this movie, it's admirably non-egoistical of Anthony Chan to have the young actor who plays him (Ng Hok Him) to not be at the center of the movie.  At the same time though, I must admit to finding his character to be among the more interesting; with, in contrast, the likes of Bennett Pang (essayed by Carlos Chan and referred to as Ah Kin in the movie) seeming to be more defined at times by his relationship to others, notably his tailor father (played by Simon Yam), than memorable in his own right, and my childhood favorite Wynner, Kenny Bee (portrayed by Tan Yu Tian), coming across early on more like a broody caricature than a flesh and blood individual.
As for the actor who portrayed Danny Yip: I found Lam Yiu Sing to visually resemble the real Alan Tam more than the actor who played him (Eugene Tang), and so much so that it would actually distract!  Still, I have a feeling that many other viewers of this film would have found themselves being driven up the wall even more by the many times that The Animals' House of the Rising Sun is played in House of the Rising Sons -- and wouldn't be surprised if the frequency is higher even than the number of times California Dreaming can be heard playing in Chungking Express!
Such quibbles aside, this evocative movie is one of those Hong Kong cinematic offerings which makes up for its abundance of cheese and lack of polish by having a lot of heart and the kind of moving sincerity that will get you tearing up in a good way.  Its colorful and detailed depiction of 1970s and 1980s Hong Kong, as well as the lives of the working-class youth who risked the wrath of their fathers to pursue their dreams, also helps make for an enjoyable movie.
I'm not sure if House of the Rising Sons strikes a chord with the younger generation of Hong Kong movie viewers.  But for this old stager, the film had plenty of movie magic and star dust -- not only courtesy of the actual members that this offering works as a worthy tribute to but also a number of beloved familiar faces in the supporting cast, including the likes of the reigning doyen among Chinese-language actresses, Kara Hui Ying Hung, and Elaine Kam (who seems to have played a mother in movies since forever; what with her also having played the mother in 1997's The Soong Sisters, starring Maggie Cheung Man Yuk, Vivian Wu and Michelle Yeoh!).