Positively reacting to snowy sights in Spain this past May! 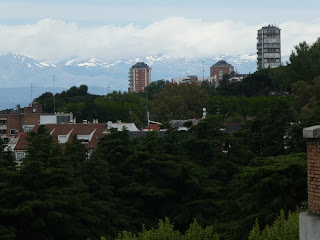 Snow on the mountains visible from Madrid's Palacio Real! 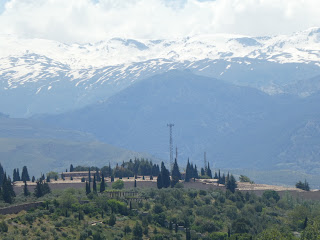 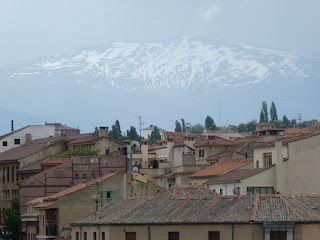 Still more snow visible on the peaks of mountains --
this time from a viewpoint by Segovia's Roman Aqueduct
Growing up, as I did, as a small child in a country situated very close to the Equator, the closest thing to snow that I saw or touched in real life was the frost in the freezer section of the refrigerator.  Little did I know then that there would come a time in my life when I would see snow so regularly and in such great quantities that I would get sick and tired of seeing that cold white stuff and decide that if I never ever saw snow again, that would be fine by me.   For as it turned out, I ended up spending four years attending college in a part of the US known to many as "the Siberia of America", where winter comes with the Halloween Ghost and leaves with the Easter Bunny!
The first winter that I was in Wisconsin, I was happy and excited when the first snow fell.  But it kept on snowing and snowing and snowing for a number of months.  And long before spring finally came along, I not only got fed up of seeing so much the cold, white stuff on the ground and roofs of buildings and such but also being asked whether I was happy and/or excited at the sight of the snow.  (With regards to the latter: I took to responding in a world-weary tone: "No, because I'm an Eskimo"; which apparently was so convincing that it prompted many of the questioners to apologize for having mistaken me for, well, someone from warmer climes who wasn't used to seeing snow!)

After garduating from Beloit and moving to Philadelphia, I continued to see snow regularly each winter.  And while there was far less of it in that part of the country, the authorities seemed to be far less able to deal with it -- with the result that roads were often more hazardous in winter and the snow often didn't get cleared for days and, consequently, often turned gray with dirt or yellow as a result of many a dog in the neighborhood getting walked out to pee on it!

So it suited me perfectly fine that for some 11 years after I left Philadelphia, snow was confined once again to paintings and the silver or small screen.  But on a visit to Shirakawa-go in May 2014, I caught sight of white-capped mountains and one year later, found myself unexpectedly walking once again on the wet, white stuff on a visit to Norway in June 2015.  Since then, I also have had snow fall on me while on transit at Munich airport one January evening in 2016, got to gaze at a beautifully snow-topped Mount Fuji in the fall of that year and trudged through quite a bit of snow in Hikone this past January!
In Spain this past May, I found myself viewing snow-capped mountains on a number of occasions, one of which happened to be the Old World's Sierra Nevada Mountains.  Rather than be alarmed or annoyed by those snowy sights, I found them to be pleasingly picturesque.  Consequently, I've now amended my "not ever wanting to see snow again" stance to one where I do think it rather pleasant to catch sight of the white stuff every once in a while, albeit from a distance, and without having to set foot on it and feel the icy cold temperatures that are required for it to stay for a time on the ground. ;b
Posted by YTSL at 11:27 PM