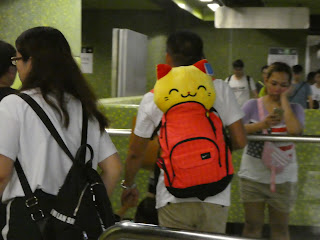 Spotted on a man's back in Wan Chai earlier today :) 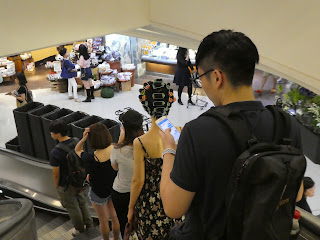 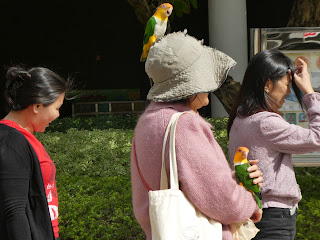 Spotted on a woman's head and in her arms
in Victoria Park late last year ;b
While going up an escalator in Wan Chai MTR station earlier this evening, I was taken aback to see what appeared to be the face of a giant smiley cartoon cat in amidst a sea of humans.  A few seconds later, the crowds parted to reveal a man carrying a big cat plush in his backpack, the head of which was allowed to stick out of the bag.
The sight of it got me smiling and thinking how cute it was -- and fishing out my camera to get a quick snap for posterity.  It also got me thinking of the woman I saw with a giant teddy back on her shoulders in Shing Mun Country Park on New Year's Day -- and how it's actually not all that rare for me to come across some rather startling sights while out and about in Asia's World City!

As an example: just last week, while heading over to do some grocery shopping in Causeway Bay's Times Square, I caught sight of a woman with curlers in her hair and a dress that easily could be a nightgown strolling about as if this was a completely normal way for her to look!  Adding to the bizarreness of it all is that when I told some of my friends about this encounter, one of them passed me a link to a newspaper article written by a woman living in the USA who has worn curlers and her bathrobe in public, and insinuated that this may well be a new cultural/fashion trend, while a couple of others immediately got to thinking of the kick-ass landlady in Kung Fu Hustle who thought nothing of being seen in this -- to my mind -- eccentric ensemble!
Another time when I wondered whether I was on the Hong Kong equivalent of Candid Camera was one fine afternoon last winter.  While strolling through Victoria Park, I found myself walking past a woman taking a couple of her pets out for a walk.  Now, although the idea may seem strange to people in many other parts of the world, it's actually not considered all that bizarre here in Hong Kong (and other parts of the Chinese-speaking world) for people to take their pet birds out for a walk or just some fresh air.  However, they tend to have their birds in cages when they do so -- rather than in their arms and perched on their heads like a certain surely eccentric lady had opted to do!

Although they may initial appear on the freaky side, like with the creator of the colorful sculptures that used to greet hikers at one section of Wilson Trail Stage 3 (but which a friend has told me has sadly been removed from the area), I tend to look upon these characters as adding color and even charm to Hong Kong.  I also think that it speaks well of the tolerance level of a society that these individuals can have a place in it -- and if nothing else, I must admit that my sightings of such folks blithely going about their business do add a modicum of welcome novelty to my day and put a smile to my face. :)
Posted by YTSL at 11:56 PM

The lot sculptures were called 王才十八公. You may use the Chinese string to look up older information. I believe they have been removed sometime in 2017. A friend walked by the site around November 2017 and they are already gone.

The red sculpture you quoted in your previous post was likely a Chiang Kai-Shek look alike considering the former Tiu King Ling settlement was just down the slope on the SE side.

I'm sad to get confirmation of those sculptures' removal. Their sight represented a cultural and visual bonus for me whenever I hiked that trail!

Wonderful photos. Love the curlers in the woman's hair.

Thanks for appreciating the photos! :)