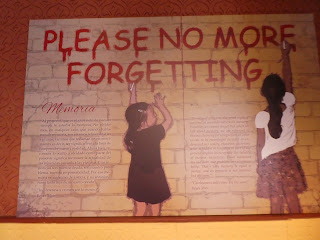 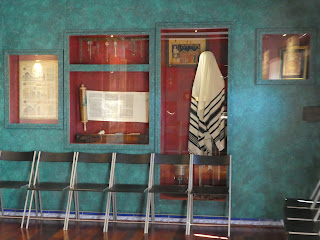 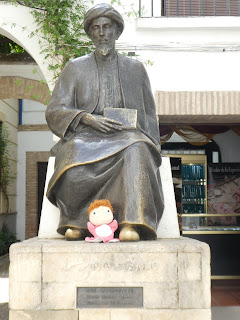 Puppet Ponyo at the feet of a statue of Maimonides,
one of Cordoba's most celebrated Jewish sons
There's no question that the main attraction in Cordoba as far as my German friend (with whom I toured Spain) and I were considered was its celebrated Mezquita.  As it turned out though, I think we ended up spending more time in the Andalucian city's Jewish Quarter than the great Mosque-Cathedral of Cordoba.

We effectively stumbled into the area while trying to get away from the frustratingly large crowds of tourists that had flooded much of Cordoba's UNESCO World Heritage-listed historic center and made the city feel much more like a tourist trap than genuinely attractive attraction.  After passing by the statue of Maimonides (which makes for a thought-provocative troika along with those of the Roman philosopher Seneca and Muslim thinker Averroes (aka Ibn Rushd) found elsewhere in the city) and getting our bearings, we decided to head deeper into this neighborhood of narrow streets and thick, whitewashed walls and over to the Casa de Sefarad to learn more about Cordoba's Jewish past.
Housed in a 14th century building located directly across from the only remaining synagogue in the city (which also happens to be one of just three medieval synagogues still standing in Spain), this museum of Spanish Jewry's text-rich displays make up in information what the institution lacks in actual artifacts.  Despite it actually not being all that big, I ended up spending more than an hour at this space which also functions as a cultural center (and looks to have a room set aside for prayer as the synagogue is currently closed for renovations).
The Casa de Sefarad's permanent exhibitions (which includes ones on the history of the Jewish Quarter of Cordoba, notable Jewish women of Al-Andalus, and the Marranos) take some time to go through because they are so laden with facts.  And I ended up reading every evocative word of a special exhibition on Muslims who have come to the aid of Jews over the course of history (including the Albanians who secretly sheltered Jewish refugees during the Second World War who I first learnt about via a screening of Besa: The Promise at the Hong Kong Jewish Film Festival a few years back).
Speaking of evocative: a couple of times during the visit, the air of the Casa de Sefarad was filled by a staffer singing the kind of song that one just knew had to be religious in nature and also couldn't help being emotionally affected by even though one can't understand its words.  Early on during my visit, the same staffer had told me that he's Spanish but not Jewish.  The feeling I did get though is that he has a respect and appreciation of Judeo-Spanish (Sephardic) culture, traditions and history which he hopes to be able to share with many others.
Posted by YTSL at 11:51 PM