Traces of Spain's Jewry in Segovia 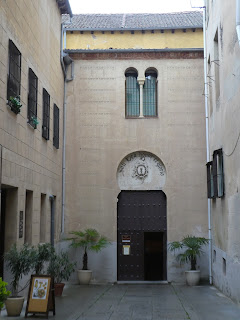 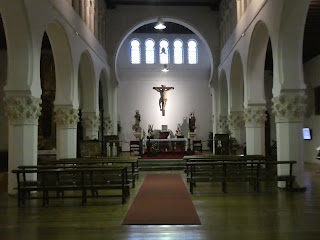 Home to a convent's modest church since 1419 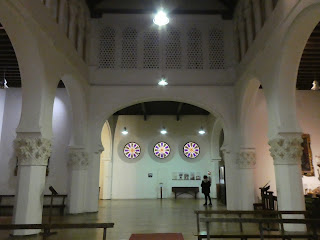 Would you believe that this space was previously
home to Segovia's main synagogue?


I may have opted to give Segovia's Cathedral a miss but this doesn't mean that I didn't spend any time in a house of worship in that historic Spanish city.  While making my way from the area where the exposed section of the Roman aqueduct can be viewed over to the city's Alcazar, I found myself seeing shelter from the rain at the Corpus Christi Convent's modest -- definitely by Spanish standards -- church.


Described as "skippable" by the guidebook I heavily relied upon while in the country, I nonetheless found this place of prayer to be worth a visit; not least for its history as Segovia's main synagogue up until it was confiscated by the authorities in 1410.  Turned into a church in 1419, the 14th century building is physically attached to the rest of the convent which is situated in Segovia's old Jewish quarter, within the old city walls and across the river from where I later saw that the old Jewish cemetery is located.


Like with Cordoba's Mezquita, sections of the former non-Christian house of prayer are visible in this historic section of the convent; this even after the bulk of this building was destroyed by a great fire in 1899.  While this does not seem like much, consider that in Spain's Jewish museums (including Cordoba's Casa de Sefarad), there is next to no artifacts which actually hail from Spain and a time which predates the mass expulsions of Jews from the country in 1492.


I must confess: While I knew about the historical presence of Muslims in Spain prior to my setting foot in it, I hadn't realized until I visited the country that there once were as many as 200,000 to 250,000 Jews in Spain during what has been described as the "Golden Age".  These days, the population size is more along the lines of 13,000 (affliated) or 50,000 (resident) -- which is not much at all in a nation of more than 46 million people but, nonetheless, more than I expected of a country which has a history involving mass expulsions, conversions and massacres of its non-Christian -- actually, even non-Catholic -- populace.

In addition, I must admit to not expecting that there were Jews living in Segovia during the reign of Isabella I of Castile and her forebears.  Somehow, it had not occured to me that there would be a Jewish community in the city in which she was crowned queen.  Put another way: I naively thought that she wouldn't consider people living in the same part of the world as her to be "the other".  But it seems that, too often, one's enemies are those that one really should know -- and think -- better about rather than those whom one has geographical reasons for not knowing all that well (in more than one sense).

On a perhaps more positive note: One often hears -- and sees the truth in -- the quote that "history is written by the victors"; so it's intriguing that over the course of my travels in Spain, I've come to learn quite a bit about the Muslims and Jews -- rather than just the Catholics -- in the predominantly Catholic country's past.  And I find it pretty interesting that the three Segovian landmarks that I ended up spending time checking out turn out to have have Roman (the aqueduct), Muslim (the Alcazar) and Jewish (the church of the Convent of Corpus Christi) origins!
Posted by YTSL at 5:38 PM

I think it would be interesting visting older churches.
Coffee is on

I'm generally interested in visiting older churches too but I think I got a bit "churched out" towards the end of my Spain trip! So, the day I went to Segovia, I could deal with going to only one church/cathedral -- and while it's not orthodox to pick this smaller place of worship over the cathedral, I don't regret my decision!