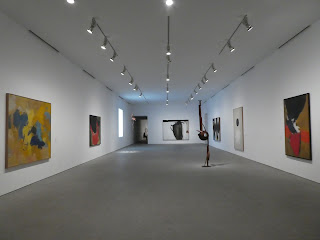 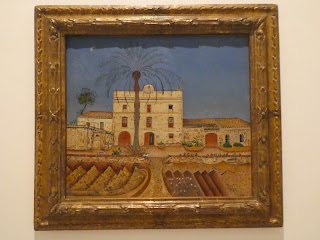 One can see works by Joan Miró... 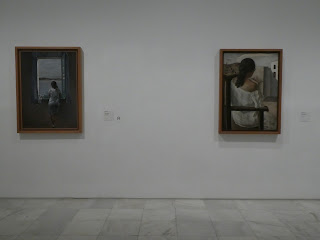 ...and Salvador Dali, among many others


Many visitors to Madrid only pick one museum to visit -- and when they do, it invariably will be the very large artistic treasure house that is the Museo Nacional del Prado.  It seems that there also visitors to the Spanish capital who leave without setting foot in a single museum there.  I, on the other hand, spent time in four of Madrid's museums: the Museo Nacional Thyssen-Borenemisza on my first full day in the country; the Museo Arqueológico Nacional on the day that I returned to the city from an Andalucian sojourn; the Prado (where photographs are not allowed to be taken, like with the Palacio Real and El Escorial); and, on my final day in Spain, the Museo Nacional Centro de Arte Reina Sofía.


Located in the museum neighborhood where the Prado and the Museo Nacional Thyssen-Borenemisza are to be found, Spain's national museum of 20th century art is quite the attraction itself; thanks in no small part to it being the home of Pablo Picasso's iconic Guernica.  And the historical as well as artistic significance of this mural-sized oil painting created in reaction to the bombing of a Basque village by warplanes from Nazi Germany and Fascist Italy at the request of the Spanish Nationalists during the Spanish Civil War should be clear to visitors to the museum which has devoted eight rooms (by my count) to showcasing the work and providing information as to the politico-historical context in which it was created.

No photography of any sort is allowed in that suite of rooms, and I find it understandable because the mood in there is much more like that found at war monuments rather than conventional art museums.  But contrary to the insistence of one over-zealous museum guard that I had the bad fortune to encounter, it's actually allowed in the rest of the public galleries of the Museo Nacional Centro de Arte Reina Sofía.


Among the other works that caught my eye in this museological institution are very dark  works by Goya (some of which really graphically document human atrocities), and those by Miro and Dali that were rendered in a very different style from that which has come to be associated with them along with others that are far more recognizably works by those two artists.  If truth be told though, fewer art works really impressed me at the Museo Nacional Centro de Arte Reina Sofía than I thought would be the case for an art museum that does have a number of works by famous non-Spanish artists (e.g., Francis Bacon, Alexander Calder and Rene Magritte) as well as Spanish ones.


Something else I found rather troubling was that even while the exterior of the museum's buildings looked pretty stunning, there were literally were cracks in the floor tiles and some of the tiles even had come loose.  Put another way: I came away from my visit to the Museo Nacional Centro de Arte Reina Sofía with a sense that Spain's decade-long economic woes have affected its artistic legacy as well as the individuals out begging and turning to crimes such as pickpocketing on the streets in the neighborhood in which it's located; and, almost needless to say, I found this more troubling than some of the frankly pretty disquieting art on display in the museum.

All in all, my visit to the Museo Nacional Centro de Arte Reina Sofía didn't leave me feeling as good as I expected and would have liked.  Having said that, when its main treasure is a work that is effectively a primal cry of anguish, I guess it stands to reason that this is a museum where beauty is secondary to expression and emotion, negative as well as positive.
Posted by YTSL at 10:43 PM