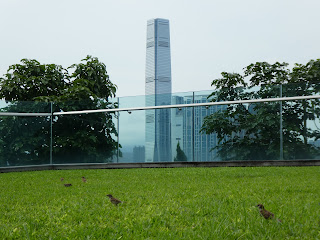 Chirping birds and greenery in the middle of the city! 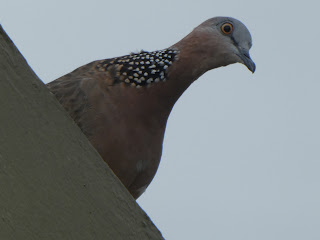 What are you looking at?! 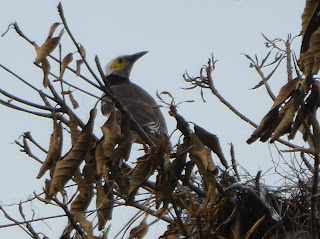 A more exotic bird looking equally even more
at home in the city!
A little less than two years ago, I moved from the apartment that I had lived in for some eight years to another apartment around just 10 minutes' walk away.  Since their buildings are pretty close to each other, I didn't expect that the surroundings would feel all that different.  But very early on, I got to realizing that the sounds I hear and have come to associate with each of these apartments do vary quite a bit!
After I moved into my old apartment, I realized that its location on a road along which buses (as well as minibuses, taxis, lorries and cars) go along meant that I would be hearing traffic going along it all day and night long.  And since my bedroom faced the road, I also would see shadows from the light of moving vehicles playing on its walls and ceiling.  (Yes, I could have pulled my curtains completely closed but I actually like waking up to natural sunlight flooding through the windows and into the room.)
Rather than disturb me, I actually got used to this state of affairs pretty quickly.  As strange as it may sound, I liked that I could sense that the city I had chosen to live in was (is) very much alive and pretty much constantly on the move.  And conversely, whenever things got quiet, that would be a signal that a typhoon was visiting town (since buses stop running after Typhoon Signal Number 8 gets raised!).
Compared to my old apartment, it's generally quiet around my current apartment.  Whenever visibility gets on the low side in Victoria Harbour though , I can hear fog horns being sounded as I'm a couple of blocks closer to the harbor now then there previously!  Even more surprisingly, I often wake up these days to the sounds of birds singing (or, at least, chirping).  For even though I'm still living in the city, I've now got a bedroom that looks out on a (podium) garden whose trees quite a few birds appear to like hanging about in very much!
In view of how small it is and also how built up and densely populated a good chunk of it is, it can be pretty surprising to discover that more than 530 species of birds have been spotted in Hong Kong.  As things stand, one can expect to hear and also see some of these avian creatures when out hiking in one of the territory's country parks (and special areas).  And although one's chances of seeing the more unusual bird species are higher at the Mai Po Marshes Nature Reserve or Hong Kong Wetland Park (or, if you're fine with seeing them in a caged setting, Hong Kong Park's Edward Youde Aviary or the Kadoorie Farm and Botanical Garden), it's also the case that quite a few winged creatures appear to feel right at home right in the middle of the most urban parts of the city! ;b
Posted by YTSL at 9:27 PM

All the photos seemed to show local common birds. 'Eurasian Tree sparrows' in the first, 'Spotted Dove' in the second, and the third is the noisiest of the three, 'Black collared starling'. There should be some BulBul around just anywhere in the city.

At your area closer to the coast, you should be able to find some Herons and Egrets. I have seen Night Herons and others along the Piers. Not to mentioned the black kites above. There are crows in the Causeway Bay area close to the Victoria Park, so you may see them picking bins for food when no one is around.

Wow, you seem to be quite the birder! The Eurasian tree sparrows and spotted doves (or their close relatives) are birds I knew about when growing up in Malaysia. The black collared starling is less familiar to me. Bulbuls, herons, egrets and black kites have only become familiar to me post my moving to Hong Kong. Crows, on the other hand, I'm too familiar with -- and thank the stars that there are way fewer of them in Hong Kong than Malaysia and, for that matter, Japan!

I am not even qualified as a birder. Maybe an amature below entry level at best. These birds are so common and could be seen most everyday, I just have to know a few of their names is all. There are lots of birds I still have to remember their images and then go home to consult the 'Photographic guide to the birds of Hong Kong'.

Oh, the starlings also like walking on the ground as they pleased. I have also see some other starlings (maybe a grey or a white-sheeked) lingering on the slopes at our eye level along Hatton Road down slope. These birds are not shy among people.

You qualify as a birder to me (and many other people) by virtue of your owning a copy of the "Photographic guide to the birds of Hong Kong"! ;b