Taking Back the Nights 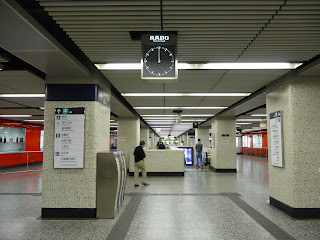 No lie -- the 12 o'clock that the clock in the MTR station
is showing is not 12 noon but, rather, 12 midnight
A few weeks after I moved to Hong Kong, I had dinner one night with a friend in the Tin Hau section of the territory. Afterwards, she nonchalantly told me that she planned to walk through nearby Victoria Park on her way home. With this small act, she provided me with significant notice that the Big Lychee is a big city like few others in the world -- in that it's so safe (for women and men, young and old alike) both in the wee hours of the night and during the day that the powers that be have no qualms about allowing a public park like Victoria Park to be open 24 hours a day.

Put another way: Although locally-made movies with titles like City on Fire, One Nite in Mongkok and To Live and Die in Tsimshatsui might get one thinking otherwise, I've come to realize that Hong Kong is the kind of place where I often feel quite happy and confident to be out and about at -- and even past -- midnight as well as exploring nooks and crannies on my own. And so much so that I really think nothing these days of watching a late night movie and emerging out into the streets of Yau Ma Tei during the so-called witching hour.

In contrast, I think of the many evenings I spent in many other places holed up in a living space turned refuge from the evils of the world come night. And should you think I exaggerate: In college in the USA, I was introduced to the Take Back the Night march and campaign that has grown to more generally embody a violence against women movement but was originally conceived as a way to protest the violence (and fear of it) that woman too often experience while walking in public at night in places like Philadelphia (where, more than incidentally, both the friend I mentioned in the first paragraph and I have lived -- hence our being able to regale one another with horror tales regarding certain sections of the City of Brotherly Shove).

Many reasons have been furnished for Hong Kong's low crime rate. I'm no expert but two that I'd like to give are evident in the picture at the top of this blog entry: the fact that many parts of Hong Kong are very well-lit (so much so, in fact, that some people complain about light pollution and studies have been set up to look in depth into it!); and it also equally being the case that there's a lot of foot traffic (including on the part of the police force).

And for those of you who say: There aren't too many people in the picture -- remember, it's midnight. And yeah, you're forgiven for forgetting that... seeing that the MTR station's so brightly lit even during that hour! ;b

Once I returned from Central to Tsuen Wan around 7pm. The streets seemed pretty "quiet." The stalls had closed up so foot traffic was very light. Being in a rather unfamiliar city, I found myself walking rather briskly to my hotel (which I also had a helluva time finding my way) and being attentive as to my surroundings. It's probably a good idea to do that anyways but caution is definitely something one brings over from the States.

Take Back The Night is a good cause. And one that is probably more needed here than there which is good news in a way for those of us who hold Hong Kong in high regard (even those of us who have never been there!).

I usually don't feel quite as nervous -- being an overweight male at 6 foot tall at the very minimum makes me a more difficult target to take down on the streets.

And I half expect Brigitte to pop up with a blonde wig in that picture, looking irritated and scanning the horizon for her drug mules! (Sorry, I couldn't resist, having just watched the film a week ago!)

7pm and the streets were quiet? I'm surprised/shocked! And yeah, it's good to be cautious but just make sure you're not paranoid!

From your description, I can understand why you're not inclined to be nervous/wary when walking the streets at night. Having said that, I had a former American military officer friend get mugged while walking back a few blocks one night from my place to his in West Philadelphia! So I'd be careful if I were you... :S

Oh, and re Brigitte: to answer a question you asked on your blog and which I haven't got to answering there yet -- when I go to Chungking Mansions for dinner, it *is* for Indian food. ;b

I remember remarking on how clean and non-vandalised an underground passage was in Monaco. It was pointed out to me that there were video cameras every few yards. I imagine it's fairly safe there too but I probably won't be testing it out.

Having lived in the US for years, I was really worried when faced with underpasses here in Hong Kong. It's taken me a while but I now realize that they really are in fact safe -- and don't smell of nasty urine, etc. either!