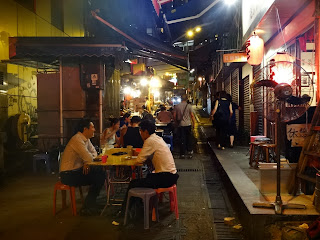 Where I like to eat on a cool evening :) 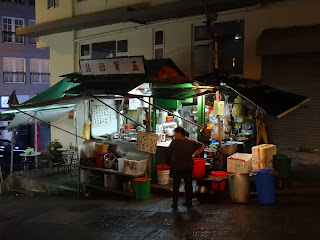 It may not look it from the photo but Leaf Dessert
is actually a pretty popular dai pai dong! ;)
February is the coldest month of the year.  That's something I was told during my first winter at boarding school in England decades ago -- and whenever I've lived in a place with four distinct seasons, it has indeed felt this way for the most part.


But whereas I would spent February eagerly awaiting warmer weather to arrive when I lived in Britain and the USA, I often find myself hoping that spring won't come too soon here in Hong Kong.  One reason is that I tend to associate the spring with way too many super rainy days here in the Big Lychee.  For another, Asian winter foods (including Cantonese clay pot rice and laap mei) may well be my favorite seasonal foods of all!


Furthermore, although outdoor dai pai dong like Sing Heung Yuen are open all year round, they really are far more comfortable to dine at in cool -- even cold -- rather than hot weather.  Consequently, I'm more likely to feel up for frequenting them in the cooler months (though it's true enough that even when it's boiling, I still am liable to get cravings for that Gough Street dai pai dong's tomato soup!).


Another reason to prefer eating at dai pai dong in winter is that cockroaches and their ilk seem far less active out on the streets of Hong Kong in cold and dry weather than during hot and humid evenings!  Hence my being more likely to have dinner at such as Sing Kee, the dai pai dong on Stanley Street whose offerings are famed for their wok hei, and which has featured in such as the Hong Kong episode of The Hairy Bikers' Asian Adventure TV show (as well as is located in the same dai pai dong-rich area in Central where Faye Wong's character bumped into Tony Leung Chiu Wai's in Chungking Express), during the cooler and colder months of the year.

Incidentally, the last time I ate at Sing Kee, I found myself sharing a table with a woman who told me she was a dancer who would be performing at this year's Hong Kong Arts Festival.  And some time ago when I was eating at Sing Heung Yuen, there was quite the commotion when superstar singer-actor Eason Chan appeared on the scene (and indicated, from the way he interacted with the dai pai dong's staff, that he's a regular patron of theirs)!


So to those who turn up their nose at the suggestion of dining at a dai pai dong: now you know what you're missing -- the possibility of celebrity encounters and/or interesting dining companions along with some actually pretty tasty food in atmospheric dining conditions that I actually consider attractive, particularly during those times of the year when the very act of sitting in non-air-conditioned space won't get one feeling over-heated as well as sweating profusely! ;b
Posted by YTSL at 11:37 PM

Interesting article. I like learning about types of dining I'm not familiar with.

You'll be interested in my post following this one then -- as I've written about dining in an indoor dai pai dong! ;)

Wow ... this is what I've been missing, for a couple decades!

The last time I dined at something close to a Dai Pai Dong in HK it was a few years back at a Chiu Chow type place near Tai Wai, and that was only partially outdoor. Now thanks to your post, I've got to give Sing Kee a try when I drop by HK in the future. That said, as you've pointed out it may be safer to go in the colder months!

Give Sing Heung Yuen a try too. Also, you know that you can eat outdoors at the seafood restaurants on Cheung Chau, right? Though having said that, my favorite seafood dai pai dong is Wah Kee, over at the Mui Wo Cooked Food Centre, where you're sorta indoors but can catch the seabreeze. :)

Ah ... now I remember, I did eat outdoors at Cheung Chau a little while back, though that wasn't quite the Dai Pai Dong feel that I crave. Thanks for the tip (and the hiking tips) about Mui Wo, as it normally would cross my mind to travel there.

Cheung Chau feel too seaside resort-y for you? ;)

And you're welcome re the tips about Mui Wo. I wouldn't go so far as to say it's worth spending an entire day out there but I do reckon it's a nice place to visit when coupled with a hike or another Lantau location. :)

Actually I do enjoy Cheung Chau for its old temples, quirky street snacks and cheap seafood restaurants. I just didn't think of them when I craved Dai Pai Dong food ... that said, they're still much cheaper than dining in urban HK though.

It depends on which part of urban Hong Kong you're in, and what you eat. E.g., I had a tasty shrimp roe noodles with omasum lunch at Lau Shum Kee in Sham Shui Po. The total damage (with a bottle of Coke added to the mix) was just HK$47 (about US$6)! ;)