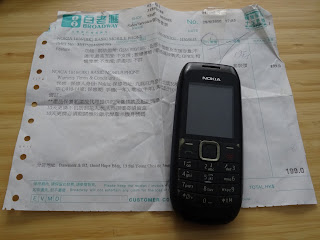 My current phone and the sales invoice for it ;b
The rumors were true: the Nokia 3310 is really back!  And for the record: no, I will not be rushing to get myself one... since my current Nokia phone, which I got back in August 2010 (and which was sold to me with 10 year warranty), is -- touch wood! -- still working fine!


The Nokia 1616 may not be as iconic as the Nokia 3310 but I really love the one I have.  The fourth and current mobile phone I've owned, it's lasted far longer than the second hand Motorola mobile phone I was given by my mother after my return to Asia in July 2003 from the US (where mobile phones weren't as popular, and were even rather rare at the time) and I got a job over in Kuala Lumpur (with a fairly hi-tech company) as well as the two Sony Ericsson phones I had which both started malfunctioning before they reached their fourth year.


When I bought my Nokia 1616, smartphones already existed but were nowhere as commonplace as they are now.  The first few years that I had the phone, people would ask me when I'd replace it and I'd tell them "when my current phone dies".  And, some six and half years on, my current phone hasn't died yet!

Nowadays, people tend to react with disbelief when they see my phone for the first time.  Actually, I think some folks seem to be in shock even when they see my phone again for the upteenth time!  It's like they can't believe that: a) a piece of technology can last this long; and/or b) I haven't got rid of -- and replaced -- a piece of technology that happens to still be working fine!

In all honesty, I find both those sentiments and ideas to be so sad.  With regards to the former: with all the technological advances and mastery that humankind has achieved, why aren't electronic, electrical and other equipment made to last -- and, in the process, ensure that we aren't so wasteful with the earth's resources and producing so much more junk than we should?  With regards to the latter: rather than knock something because it's old, I actually value its durability -- and, because there's not as many of them left compared to when they were first made, their (increased) rarity!


People who've tried to tell me why it's great to have a smartphone tell me about their added features such as their having a built-in camera and a pedometer app.  The thing though is that I prefer to have a separate camera, with such as the 30x zoom feature that smartphones don't have, and I've long had an actual pedometer, which I click on my belt and is pretty accurate.


People also have gone on and on about the smartphone's greater connectivity: except that I know of parts of Hong Kong where my hiking companions' smartphones have no phone reception but my non-smartphone does!  In addition, I've lost count of the number of times that friends with smartphones have been unable to find a restaurant, bar, etc. that we were supposed to meet at (even with Google Maps at their fingertips) and I've had to go out and bring them to the place!


Admittedly, there have been times when I've been abroad, found that my otherwise trusty phone doesn't work and had no regular, convenient access to a phone capable of making and receiving international phone calls (e.g., in Japan, which shut down its 2G network a long time ago and whose Dormy Inn business hotel chain I like, though not for its phones that can only make and receive calls from within Japan).  But after a while, you get used to it.  And when I had the kind of job where people thought it perfectly fine to call you even though you hade made it clear that you were on vacation and out of town, it actually felt really liberating to be out of phone range for even just a few days!

Actually, I used to think that after I quit that job, I'd get a smartphone.  But when I did do so, that urge to get a smartphone never actually came -- or, at least, never was stronger than my resolve to not replace something that's still in working order, and working fine as far as I'm concerned.  Also, with each passing year, I get to thinking that maybe when this phone dies, I might replace it with another non-smartphone.  And now with the return of the Nokia 3310, I'm getting to thinking that there might be quite a few more people like me than I had previously thought -- and maybe even those who want to replace their smartphones with ones like mine! :)
Posted by YTSL at 11:59 PM

I have flip phone, and I'm still flip on the smart phone.
Coffee is on

I've never had a flip phone but I think they're cool because they remind me of the communication devices used in Star Trek! ;b

Bravo, YTSL! I no longer use my old Nokias, but hung on to them and still take them out of my junk drawer from time to time for nostalgia's sake. Maybe one day I'll ditch my iPhone and go back :)

How many (still working) old Nokias do you have?! Cool re your not having hung on to them and try using one again some time rather than the iPhone. You might enjoy the freedom it brings! ;)