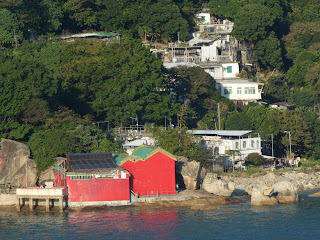 Most, if not all, Tin Hau temples in Hong Kong -- like
this one at Lei Yue Mun -- are located close to the sea 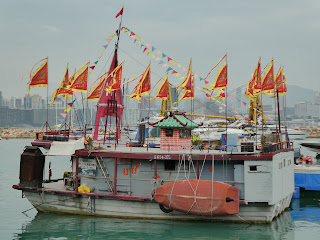 But it's the rare Tin Hau temple that actually floats on the water,
like this one moored in the Causeway Bay Typhoon Shelter!
Long before I moved to Hong Kong, I had heard of Temple Street (or Miu Kai, in Cantonese) -- thanks in large part to movies with titles like Queen of Temple Street and The Prince of Temple Street, as well as the Temple Street Night Market which these days is largely a tourist trap but which looked like it'd be a really cool place to visit in Derek Yee's C'est la Vie, Mon Cheri.
But it wasn't until my second visit to Hong Kong (back in the summer of 2000) that I got to realizing that -- duh! -- this Yau Ma Tei street got its name from a major temple complex in the area, whose central building is dedicated to Hong Kong's most popular goddess.
In the years since, I've come to know of the existence of a whole bunch of temples dedicated to the Taoist Goddess of the Sea (or Heavenly Queen, which her Cantonese monicker translates as), including the Tai Miu (big temple) over at Joss House Bay, others on Po Toi and Tap Mun, and in the area of Hong Kong Island that's come to be known as Tin Hau after her.  And although a good number of them are no longer located near the sea (or body of water, such as Victoria Harbour), I've learnt that the vast majority of them actually originally were.
Far more unusual than the Tin Hau temples found by the sea or further inland though is a Tin Hau temple that's actually located on a boat moored at the Causeway Bay Typhoon Shelter.  Home to a statue of the goddess that's believed to have been rescued from destruction during the Cultural Revolution in Mainland China, it's not been relocated elsewhere despite work on the Central-Wan Chai Bypass taking place pretty much all around it because the people in the area want it to remain where it is.
Even though few fishermen and other folks call the Causeway Bay Typhoon Shelter home any more (and the largest Tin Hau temple on Hong Kong Island lies within walking distance from it), this floating temple reputedly still remains a popular place of worship.  And seemingly perenially festooned as it is with flags, it makes for quite the lively sight; with its continued existence adding color to Hong Kong's local cultural scene as far as the likes of me are concerned. :)
Posted by YTSL at 11:35 PM

It has been some times I did not visit Hong Kong.
Hopefully, I have a chance to go Hong Kong again.

I hope you'll get a chance to visit Hong Kong again. And when you do come over, I think it'll be interesting for you to see what's changed and what hasn't since your previous visit! :)

About how many of the Tin Hau temples have visited? I always find them interesting especially if I come upon one I didn't expect to see. I think it would be fun to spend a few days seeking them out and photographing them. I understand photographing the actual figure is not permitted. Adds a touch of mystery to me. Have you been on board the floating one?

I haven't kept tabs, and I haven't gone out of my way to check out that many... and yet, I wouldn't be surprised if I've been to more than 20 Tin Hau temples already in Hong Kong alone. And no, I've not yet been to the floating one but may consider doing so at some point!

As for photographing the Tin Hau statues: I've read that on one website but I've never seen a sign forbidding that in the temples themselves.

Generally speaking you may not use flash and tripod while inside temples. Some temple management did put up signs saying no photos in icons, or both in English and Chinese.

When I first moved to Hong Kong, I saw "no photography" signs in temples and found it very strange as similar places in Malaysia, Macau, etc. had no such restrictions. Then in late 2012, I found that some of the temples I visited no longer had those signs, and was pretty happy about it:-
http://webs-of-significance.blogspot.hk/2012/11/tai-hangs-physically-unique-lin-fa-kung.html

It's true enough though that no flash or tripod use is allowed still inside the temples. That makes more sense to me -- and is more in keeping with my experience elsewhere -- than outright photography bans.