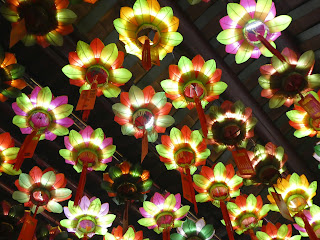 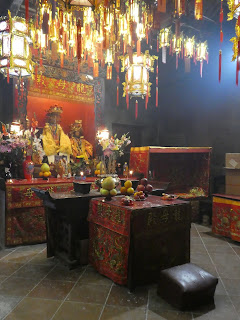 Different shaped lanterns hang from a different
part of the ceiling of the same temple
As the English Christmas carol about a sweetheart bestowing various gifts such as a partridge in a pear tree, two turtle doves and three French hens on a loved one makes clear, the traditional Christmas season goes on for 12 days.  While that may seem like a long festive period for those who really only celebrate the first day of Christmas or, at most, the second one too, the traditional Chinese New Year period goes three days better by lasting for 15 days and nights.
Celebrated in decades past as something akin to Chinese Valentine's Day by the Hokkien communities of such as Penang, the 15th night of Chinese New Year is better known in the likes of Hong Kong as the Spring Lantern Festival.  If truth be told, I get the sense that the autumn lantern festival is actually a bigger deal than the spring equivalent.  Nonetheless, lanterns do abound at this time of the year at such as the Hong Kong Cultural Centre piazza.
And often times, when I see many Chinese lanterns about the place, I get to recalling a charming ancient Chinese folktale I learnt about as a child: one involving a Chinese father asking one daughter to bring him wind in a piece of paper and another to bring him fire in a piece of paper.  As the very cool story goes: after pondering for a time about how to do so, the daughter given the first assignment brought her father a fan while the daughter assigned the second task gave her father... a paper lantern!
More prosaically, I must admit that these days, the primary significance of the 15th day of Chinese New Year for me is that it's the final day of the year that's one supposed to hand out or receive what the Hokkien call ang pow (red packets) and lai see (good luck).  By any name, they are traditional monetary gifts in the form of red packets of cash -- the receipt of which is often greeted much joy, and the giving out of them less so! ;b
Posted by YTSL at 11:24 PM

I believe it would be something to see a celebration of Chinese New Year.
Coffee is on

I think there are some elements of Chinese New Year celebrations you'd love to behold, such as the lion dances. But Chinese New Year can also be a surprisingly quiet time of the year in Hong Kong, as so many shops close and this festival being far more family-oriented than public to my mind.