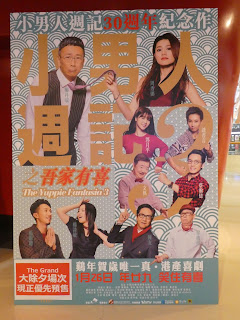 Do there look like there are any yuppies in the picture? ;)


One of the things I like to do every Chinese New Year is to check out at least one Chinese New Year movie, preferably a family-oriented comedy-drama like one of the All's Well, Ends Well series of offerings or a cameo-filled feel good blockbuster like one of the I Love Hong Kong films which I'd love to see more of.  And given a choice, I'd go for a more Hong Kong-oriented offering than a Mainland China-Hong Kong co-production, never mind an entirely Mainland China effort.


So even though one of this year's Chinese New Year films was produced by Tsui Hark and directed Stephen Chow, I was less excited about checking out this movie with Mainland Chinese vibes -- and primarily Mainland Chinese cast -- than the less heralded and smaller budget, but definitely more local Hong Kong, The Yuppie Fantasia 3.  And this even though I actually hadn't been all that impressed by the original The Yuppie Fantasia which was first released back in 1989 and consequently never got to watching its all-but-in-name sequel, Brief Encounter in Shinjuku, even though I own a DVD of that 1990 work (which currently is back at my parents' home in Penang along with a large chunk of my home video collection)!


As in the older films, Lawrence Cheng plays Leung Foon, whose love for his wife Ann (Carol "Do Do" Cheng) did not stop the couple from not seeing eye to eye, to the extent that Ann decided to go away one day with their then eight-year-old daughter and vanish from his life.  Now no longer a yuppie, really, Leung Foon's become the well-paid go-to-guy for a ruthless business magnate (Anthony Chan) who won't let dignity or morals get in the way of his getting an assigned job done.


On the surface, there's not much left of the old Leung Foon left in this more professionally successful version.  But through his relations with his secretary-lover (Chrissie Chau), old friends (with Manfred Wong and Peter Lai reprising their old The Yuppie Fantasia supporting roles) and the now 21-year-old daughter (Larine Tang) who unexpectedly appears at his doorstep one day carrying an urn with her late mother's ashes, Leung Foon shows himself to be the precisely the kind of man that important women in his life consider worth caring as well as a friend indeed after all these years.

Considering how many roles he undertook for this production, it's actually pretty amazing that director-co-scriptwriter-lead actor Lawrence Cheng actually was so good at all of them.  Among his chief assets appears to be his being generous enough to ensure that his co-stars (including fresh-faced Babyjohn Choi, playing Leung Foon's daughter's love interest) have scenes in which they get to shine as well as being able enough to get the most out of his cast (including himself).


One of the reasons why I was willing to give The Yuppie Fantasia 3 a try though was that the previous film before it that Lawrence Cheng directed and scripted was the surprisingly good Break Up 100, which showed that Chrissie Chau -- who was its lead actress and also teams up with this Hong Kong cinema veteran in this 2017 movie -- really does have other assets besides her big (by local standards) breasts!  And Lawrence Cheng does indeed get Chrissie Chau to showcase her talents once more in this offering which, like 2014's Golden Chickensss and 2015's 12 Golden Ducks, has its risque moments but nonetheless works as a Chinese New Year movie that can be (largely) enjoyed with the family!


Lest it not be clear: The Yuppie Fantasia 3 is primarily a comedy with several laugh-out loud moments even while also possessing dramatic themes and at least one scene that got my tears welling up.  It's also a tale of redemption, for a man who often had looked upon as a loser, and latterly despised by his business associates as a dirty rat.  Additionally, while the more cynical among its viewers may see it as a wish-fulfilmment fantasy, my own feeling is that an older, more experienced and wiser entertainment industry veteran at this production's helm is actually assuring us that, more often than we realize, we can change our life paths for the better, especially when we feel there are people in our lives worth doing it for.