Not your usual hike sights on an unusually warm winter's day in Hong Kong! 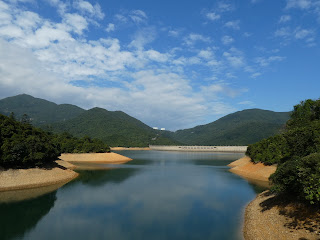 Blue skies and not much of a breeze combined to produce
beautiful sights like this earlier today :) 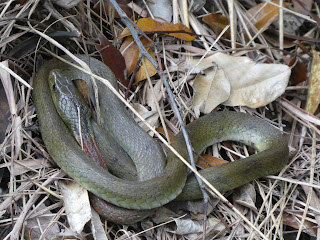 It may still officially be winter but at least one snake looks to have
decided that it's warm enough to stop hibernating and slither out!
Despite the Keung Shan Country Trail I went on last Sunday being considerably more challenging as well as lengthier than the hiking route I opted for earlier today, I drank about the same amount of Gatorade and water as I did over the course of the two hikes.  One big reason why this was the case was that today was several degrees warmer than last Sunday.  Indeed, so warm was it this afternoon that I found myself perspiring quite a bit despite wearing only one layer of clothing for the entire hike -- and at least one snake (whose neck coloring has me suspecting that it was a red-necked keelback) decided it was time to venture out and get some sun!
The way things are going, I wouldn't be surprised if the hottest January on record is followed by what will turn out to be the hottest February on record, and part of me is already dreading what the summer of 2017 will be like in terms of its heat quotient.  At the same time though, I have to say that I am generally finding this winter's temperatures to be very agreeable.  As I've declared on more than one occasion, my favorite temperature range is that when it's cool enough to be flannel shirt, corduroy trousers and/or sweater weather, yet not so cold that one feels a need to wear thick coats and thermal underwear -- and that has been the range for the most part this winter here in Hong Kong!
Another way to get a good idea of this afternoon's conditions is that there was so little breeze in the air when I was walking in the vicinity of the Tai Tam Reservoirs that the surfaces of those artificial bodies of water resembled smooth mirrors, yet it still was really enjoyable to be getting in some exercise outdoors!  Something else that's not usually the case during Hong Kong winters was that visibility was on the pretty high side today.  And any day when I can see the hills of Sai Kung from Hong Kong Island, like I was able to this afternoon, is one that makes me so very glad to be out enjoying the scenery and weather here in the often surprisingly beautiful Big Lychee. :)
Posted by YTSL at 10:39 PM

You are lucky with your weather, it's not extremely cold but very humid, often rain and always a grey sky ! Not very nice for the mood ! If even the snake comes out it can't be very cold !

We did have some rain the first few days of Chinese New Year -- but it's also true that this winter and what fall we had has generally been nicer (and warmer) than usual. Long may it last (touch wood)!