Over the course of my getting to know Hong Kong better through hiking, I've come to realize that there are a fair few rock formations in the Big Lychee which are thought to resemble this or that: such as Turtle Rock (aka Tortoise Rock) and Buddha's Palm Cliff over on Po Toi, and Vase Rock and Human Face Rock over on Cheung Chau.  Among those whose resemblances to that which they're named after I actually can see are the two most famous rock formations of all in Hong Kong: Lion Rock, and Amah Rock; both of which are located in Lion Rock Country Park.

If truth be told, the closer you get to either of these pair of iconic rock formations, the less they look like what they're supposed to resemble.  But even while they can lose some of their mystique when you hike up them (in the case of Lion Rock) or to them (in the case of the smaller Amah Rock), it still can be fun to go visit them; this not least because their location in the Kowloon hills allows for some really scenic views on clear air days... :) 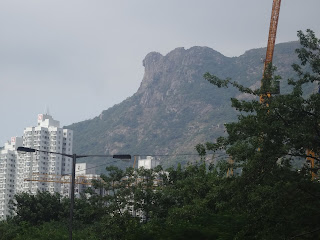 One can fairly easily see why Lion Rock is so named
from this vantage point, right? :) 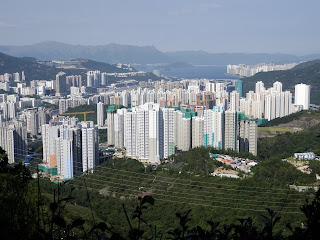 Long before we caught sight of Amah Rock, we were
treated to view bonanzas of Shatin and far beyond 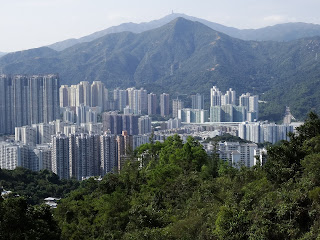 Visual reminders of there being a number of other hills, including
Needle Hill and Tai Mo Shan, to the north of the Kowloon hills 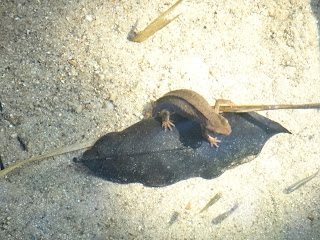 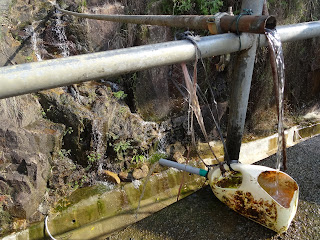 Near the same catchwater, some inventive souls have created a means
for people to have easy access to some of surface runoff from the hills! 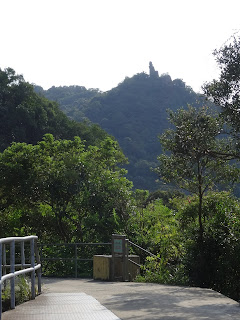 From this angle, Amah Rock looks more to me like a seated woman
than a mother gazing out to sea with a child on her back! 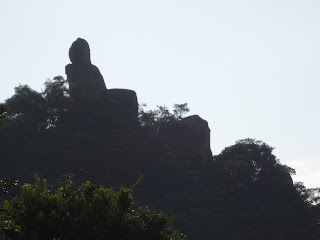 Even from this closer distance, I'm still seeing
a woman sitting on a chair from this other angle... ;S 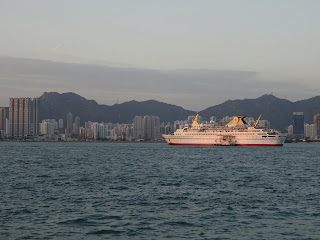 This entry is right up my alley. Anthropomorphism in nature, especially in rocks, is a lifelong passion for me. It provides me with the truest spirituality and strength I know, something that a God-based or monotheistic religion doesn't do for me.

Your top photo captures Lion Rock as a somewhat indomitable guardian of Hong Kong...And you're right, Amah does resemble a "seated woman" and, in my eyes, radiates strength and resilience sitting on her rock-throne - perhaps as a Guan-yin figure.

The links you provide in this text to Po Toi and Cheung Chau contain some of your best rock photos. I think of them, in a larger form - as Gongshi, Chinese Scholar's Rocks or Spirit Stones.

I'm with you in feeling the presence of spirits -- and my own spirit soaring -- most when I'm in nature. I also like the Shinto idea of their being kami in rocks, waterfalls, trees, etc. -- and what I do think is the related adoration of such as cute anthromorphic cat characters and pear fairies... ;)

And who knew that Hong Kong has so many interesting rocks? I sure didn't until I started exploring its countryside! ;b