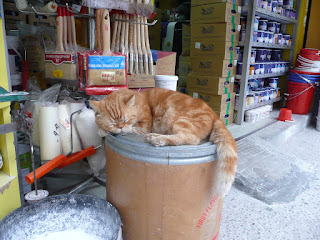 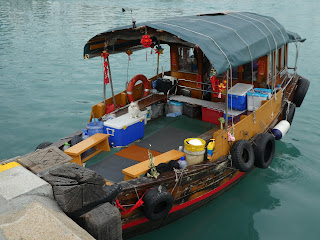 One of the cutest boat dogs I've seen in Hong Kong :) 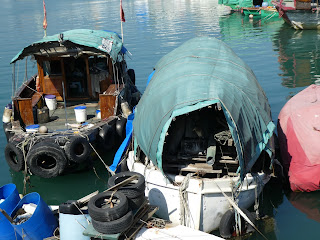 Not where I expect to see a (wild) bird sheltering!


One wintry evening some years back, a couple of friends and I went to have dinner at a traditional Cantonese restaurant whose seasonal menu items included something which was translated into English as "dog style stew".  Seeing the horrified looks of some people at our table, the waiter -- with the help of the most senior native Hong Konger seated among us -- rushed to reassure us and point out that the meat in the dish we would be having was actually mutton rather than of a canine nature.


Put another way: we were going to be served a dish which was traditionally prepared with dog meat but while the other ingredients remain the same, it was recognized that eating dog is no longer all that popular -- and, more importantly, legal -- in Hong Kong!  Indeed, I'd even go so far as to say that these days, many owners here in the Big Lychee are more likely to look upon their pet dogs as surrogate children -- and treat them accordingly, to the point of transporting them in prams as well as handcarrying them, and giving them clothes and even shoes to wear! -- than regular animals, never mind the kind of animals whose meat and such people are willing to consume.


And not only do many people enjoy taking their pet dogs for walks but more than once now, I've seen dogs hanging out in the workplace with their owners; with at least one former colleague having brought her dog with her to the office and my having spied dogs on boats, including the strangely named walla-walla that can be seen puttering about typhoon shelters and other places where there is a need for people to take them to get between the shore and their boats!


But while there are indeed dog cafes as well as cat cafes in the Big Lychee along with dog-friendly eateries where dogs are allowed to hang out near or at the table that their human owners are eating, shop dogs are a far rarer sight than shop cats and their restaurant cousins here in Hong Kong.  And while there is a tradition of keeping birds as pets in Chinese culture, it's the rare restaurant these days where pet birds are welcome, and I don't see that many shop birds about either.

Indeed, I'd say that one is more likely to see birds in the wild than in cages in Hong Kong; not least because this part of the world plays host to many migratory birds, some of whom fly here for the winter from as far away as Siberia!  And as far as these avian creatures go: one of the places I least expected to see a wild bird is actually inside a boat anchored in a typhoon shelter.  So imagine my surprise when I caught one gazing unblinkingly out at me from a small vessel at the Causeway Bay Typhoon Shelter where it looked to have sought to shelter for a time! ;b
Posted by YTSL at 11:59 PM

Seeing sea birds on boats in a typhoon shelter is actually quite common. I have seen my share of them in the Aberdeen harbour. We do not have much seagulls, but there are lots of egrats\herons of all kinds. Lots of black kites as well. In Aberdeen, there are also flocks of other land based birds like Bulbul, spotted dove, pigeon, magpie, robin and many more. In recent years crows become quite common. But they might be sort of annoying at times as they know how to dig into bins for snacks.

Oh, on the other hand, last time when I was in Cheung Chau at the pavilion atop Tung Wan Chai, I watched crows and black kits in dog fight in the air. That time it seemed the crows found something to eat and the kites attempted highway robbery...... Quite spectacular actually.

The bird in your photo was a night heron, very common sea bird in town. I have seen one feasting on its catch on a boat in Aberdeen. See if I could fetch the photos later.

I agree that seeing seabirds on boats in a typhoon shelter is pretty common. I just thought it rare to see one sheltering INSIDE a boat... ;)

And wow re your having seen crows and black kites dog fighting in the air! Also, I find the idea of crows beng robbed by kites pretty amusing. :)

Glad to see you giving cats, dogs and birds their due as charming inhabitants of Hong Kong. Anyone who has seen cats inside shops, or especially - dogs riding on bows of small craft in the bustling realm of Hong Kong's water environment - is unlikely to forget these integral residents of the city.

There do appear to be a surprising number of cat, dog and bird lovers here in Hong Kong, with the result that there are more of these animals about the place than one might expect of such a densely populated territory. And yes, some of them are really pretty charming! ;)