An evening with Sascha Goetzel and the Borusan Istanbul Philharmonic Orchestra 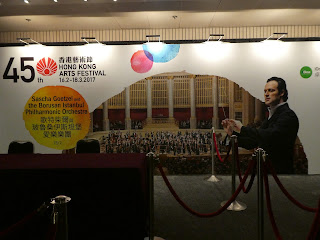 The Hong Kong Arts Festival program I attended this evening
There were a surprising amount of empty seats for the performance I attended at the Hong Kong Cultural Centre's Concert Hall this evening.  Perhaps, since the publicity for the Hong Kong Arts Festival generally has the dates for its 45th edition as being February 16th to March 18th of this year, many people didn't realize that tonight's concert was actually part of this annual mega arts affair -- and, in fact, the festival opener!
Another possibility is that the prospect of seeing and hearing conductor Sascha Goetzel and the Borusan Istanbul Philharmonic Orchestra perform didn't sufficiently excite people.  I know at least one classical music fan who told me she's only willing to pay the amount that Hong Kong Arts Festival concerts usually command to see and hear better known musicians, and one lover of things Turkish who told me she'd prefer to go for something more culturally Turkish than a Western classical music concert predominantly featuring works by non Turkish composers.
In any event, I think it's their loss to not have attended tonight's concert and my gain to have done so for there were some interesting and just plain enjoyable music on offer from this young orchestra whose artistic director and principal conductor hails from the land of Mozart and Johann Strauss (the elder and younger) but looks to be predominantly composed of Turkish musicians.  And before even one beat of music was played, I got an inkling that things would be different from usual from the seating arrangements of the orchestra.
For where I regularly expect to see the cellists and double bassists, I saw second violins instead.  Also, where I normally expect to see the second violinists, I saw viola players and double bassists. And where I normally expect to see the viola players, I saw the cellists.  Oh, and I noticed too that there was a larger complement of percussionists in the orchestra than is usually the case -- and the percussionists really did have quite prominent roles throughout the program, including for the very last piece, where two of these musicians who usually are placed in the back row were assigned seats right in front of the conductor!
The orchestra got things going with a lively rendition of Turkish composer Ferit Tüzün's Capriccio a la Turque, an orchestral piece essentially inspired by Turkish folk tunes and combined rhythms which was over too quickly as far as I was concerned.  Next up was Scottish composer James MacMillan's Violin Concerto, whose dedicatee, Russian-born Belgian violinist Vadim Repin, actually was tonight's featured soloist!  The impression I got was that it's a rather unorthodox piece that is challenging to play, and also listen to -- with the vast majority of the concert audience being far more appreciative of the encore work that Repin chose than the MacMillan's concerto which possessed sequences of dissonant music as well as ones that I actually found pretty electric!
After the interval, the orchestra performed what has come to be its signature piece.  Its melodic and often mesmerizing rendition of Russian composer Nikolai Rimsky-Korsakov's "exotic" Scheherazade was a step above what had come before, and made all the more different -- in a good, creative way! -- by way of the Arabic qanun and Turkish oud being employed along with the musical instruments that normally feature in a Western classical music orchestral work.  Still, from the way the musicians looked -- relaxed, with big smiles on their faces -- when they performed the encore work (whose title I sadly failed to catch, though I did hear maestro Goetzel describe as being a quintessential piece of Turkish music), they had saved the best for last -- and I must say this peppy piece really was a great way to conclude the evening's program.
Music-wise, I think this concert was a lovely way to start off this latest edition of the Hong Kong Arts Festival.  I just hope that Sascha Goetze and the Borusan Istanbul Philharmonic Orchestra get the audience they deserve for their second concert here in Hong Kong (that's scheduled for tomorrow): one that's ultimately as appreciative as this evening's but bigger and better behaved (in that some people clapped at the wrong time a couple of times tonight, quite a number dozed off during the slower and quieter parts of the concert, etc.)! ;S
Posted by YTSL at 11:59 PM

It had been like this all the time. Lesser known artists or groups might just receive similar treatment.

I remember a few decades ago, famed pianist the Great Claudio Arrau had to cancel his concert owing to bad ticketing. He was well-known only to classical piano enthusiastics but not the general public.

As for the two concerts of Borusan Istanbul Phil, I could not book it after seeing my roster a few months ago as I am on 7 X 24 duty this month. :-( I was only able to get tickets of Concerto Italiano-Monteverdi-Vespers & Louis Langree & Cincinnati Symphony Orchestra, both in March.

On the other hand, there is a very strange phenominum of the local education scene. The so called Music Education for Primary & Secondary schools alike would require pupils to acquire their [Concert Time]. This is sort of compulsory. Common schools (maybe with a few exceptions of the elites) did it according to the silly policies setup by Education Department and they seldom put sufficient efforts into teaching music appreciation.

I've seen low attendance for Le French May events but never Hong Kong Arts Festival ones. Maybe it's due to my choice of shows but I recently got an email announcement stating that the Hong Kong Arts Festival shows are 80% sold out -- and if memory serves me right, this is down from the usual 90+% capacity normally reported once the festival begins.

And yikes re your being on 7 X 24 duty (all) this month. Hope you'll enjoy the HKAF concerts you've got tickets for.

It's actually not that bad. The 7 X 24 stuffs is just for standing by for customers with 7 X 24 support. If the mobile phone didn't ring, nothing happens. But that would means, no hiking, no movies in cinemas and no drinks while on stand-by duty.

It had only rang twice so far, nothing serious.

I don't really trust their box office stats. Anyway.... for some sponsored events the sponsor may hand out free tickets to selected organizations to fill the seats up without considering if the attending parties would appreciate the event. Common candidates would be elders in selected institutions or students from selected primary or secondary school. I have seen elder people not accustomed to western music twitching in their seats, or even making noises repeatedly by mis-handling the plastic bag she was carrying...... ugh... Always a headache to the audience.

In the past decade I tend to attend musical events of lesser known groups or sololist playing period instruments or lesser known numbers. Those would have less chance of bumping into odd crowds.

No hiking, movies in cinemas, alcohol, etc. sounds pretty bad to me -- but you're, right, it could indeed be worse! Anyway, I'll be interested to see what the audience is like for the other HKAF performances I attend this year -- as it's true enough that this time around, I didn't go for the biggies (e.g., Tanzteater Wuppertal Pina Bausch, and the Bavarian State Ballet). And, actually, I often find the sponsored events to have the most empty seats because lots of those corporate types given free tickets don't bother to show up!