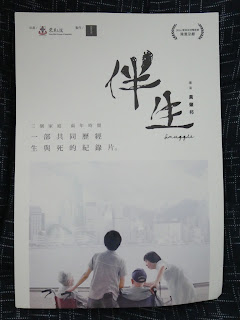 
In recent years, there have been a number of Hong Kong movies that I opted against checking out because they sounded like major downers.  Among them were Happiness, Thanks for Your Love and Mad World -- three of the films that have made the list of nominees for this year's Hong Kong Film Awards.  So why, then, did I choose to watch JC Wong Siu Pong's offering about the families of three elderly individuals who are slowly but surely approaching death's door?


It's not as though as Snuggle's director is even half as well known as the action movie hero turned real life villain who most comes to mind when Hong Kong film fans hear the initials "JC".  Nonetheless, JC Wong's film appealed because it's a documentary -- and, as such, I was anticipating that it wouldn't be filled with the kind of high melodrama that makes certain fictional depresso-fests feel overly manipulative and unpalatable in other ways for me.  Of course, this is not to say, however, that I didn't expect to see tears flowing in the film -- or for me to choke up at certain points in Snuggle.  And so it proved, for better or worse.

Initially rather confusing because JC Wong chose to splice together scenes featuring different families as well as different family members in fairly quick succession early on in the film, Snuggle improves -- and is more successful at drawing this viewer into the picture, and drawing empathy from her -- after it settles down and more clearly delineates the three family groups that are at the core of its frankly often emotionally devastating tale.


In some ways, it could be argued that the Lees have had the most tragedy visit their lives in recent months; what with an aged mother having passed away over the course of the filming of this documentary, her having been shortly preceded to her grave by one of her adult daughters (who herself was a mother to a young woman), and the family patriarch being a bad way physically but also -- after losing his wife -- psychologically.


At the same time though, there most definitely is a sense that this family is the most financially well-off of the three that allowed JC Wong and his crew uncommon access into their lives, including moments where otherwise private grief end up getting recorded for posterity and seen by others.  The Lees also come across as ultimately being the most emotionally prepared to deal with the upcoming death of the senior most member of their family, on account of more than one person being there to shoulder the responsibilities and different relations looking to be supportive of one another.

The Chans, on the other hand, are a physically frail couple who pretty much only have each other, and their now middle-aged only child, Fung Ying, to care for and be cared by.  Although they've moved out of Fung Ying's home to stay in elderly care facilities, the sense is that the elder Chans still expect their single daughter to spend the bulk of the time she has outside of work and sleep with them; a state of affairs that can exasperate and otherwise tax the often sad-looking woman who herself has never married.


Even worse off numerically -- and one gets the feeling financially -- is the Lam "family", which just consists of a cancer-stricken mentally disabled woman whose husband left her some time back, and the now adult son she abandoned as a child but has reunited with her.  In all honesty, watching how he is not only committed to fulfilling his filial duties but sometimes effectively also has to act like his mother's de facto parent can both feel admirable and heartbreaking.  And about the only silver lining in these clouds is seeing how mental disability and physical illness are unable to break the mother's spirit and prevent her from continuing to getting pleasure out of such as making little works of art and being with her son.


There are times when viewing Snuggle when one's tempted to conclude that the key is happiness may be ignorance.  Ultimately though, I think the main takeaway from this humanistic film is that caring for people can produce joy, which may be valued all the more when you realize that one soon will be permanently parted from the loved ones who have been part of your life, not just family, for so long.  And even while the love that children have for their parents and parents for their children can be very affecting to see, particularly in a world there are plenty of men out there who seem to care for so many things and other people than their spouses, it's really quite something to witness how much the two main husbands featured in the film so loved their wives.