Riding a kaito between Aberdeen and Ap Lei Chau 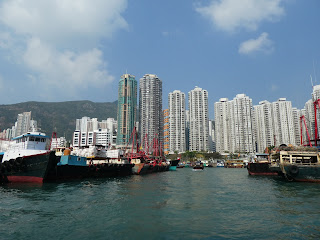 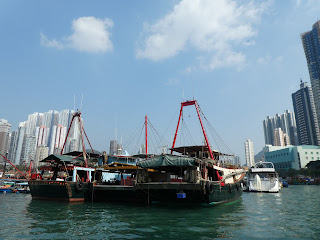 Yes, there still are traditional-looking fishing boats
to be found in highrise building-flanked Aberdeen Harbour 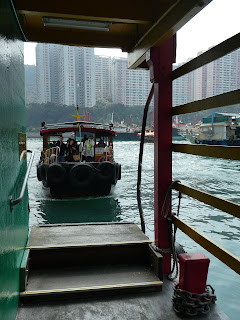 
On the day that I tried out the MTR's new South Island Line, I also went on an older form of transportation found in the area.  A ride on the kaito that goes between Aberdeen and Ap Lei Chau is undeniably slower than one on an MTR train.  But I reckon that it's far more atmospheric -- and quite the bargain, seeing as it costs HK$2.20 (~28 US cents), a full 10 HK cents cheaper than the iconic tram!


To be sure, the journey time for this particular kaito service is only four minutes or so -- shorter even than the already truncated-feeling Star Ferry rides between Tsim Sha Tsui and either Central or Wan Chai.  But in that brief period that you're on the boat, you'll be privy to many scenic views and get a much better glimpse of (life in) Aberdeen Harbour/Typhoon Shelter than if you were to remain on terra firma on either the Aberdeen or Ap Lei Chau side of this body of water.


On the kaito ride, you'll get a good idea of how crowded the harbour still is, including with fishing boats that may look on the modest size when you view them from the land but you'll realize are actually big enough to have space for people -- sometimes whole families -- to sleep as well as work, and generally live a significant chunk of their lives, on when you're close to them.  And you'll also get a better sense of the number of large birds (including kites and egrets) to be found in the vicinity: some of whom you're likely to see diving into the water to get some fish as well as flying in the air, sometimes high up in the sky, at other times just meters above the tops of the kaito and other vessels in the harbor.


Something that's also pretty observable is that -- unlike with the sampans offering water tours, for which sometimes have long queues -- the clientele for the not particularly crowded kaito are by and large area residents.  Actually, since one of the exits of the South Island Line's Lei Tung station is located just a few minutes' walk away from the Ap Lei Chau landing for the kaito, I wonder whether this ferry service will see an increase in passengers in the next few months and years on account of the MTR being such a quick way to get to Admiralty from the Southern District but there being no MTR station for Aberdeen (old) town.

If so, the Aberdeen-Ap Lei Chau kaito service will be the rare mode of transportation that will benefit from -- rather than see its clientele diminished by -- the coming of the MTR into its part of Hong Kong.  And, I for one, am happy about that since it means an increased likelihood of the continued existence of an older, charming element of Hong Kong in the years to come! :)
Posted by YTSL at 11:10 PM

The Kaito route you took was my usual route on weekend to Aberdeen when I was not in a hurry.

There are also other Kaito Routes to other islands, say, Lamma (two routes run by different companies, one to Pak Kok\Yung Shue Wan and the other to Mo Tat\Picnic Bay), Po Toi (via Stanley), as well as Cheung Chau. On Weekends and holidays, the round trip Cheung Chau tickets are much cheaper than 2 X single trips.

I've been to Lamma, Po Toi and Cheung Chau but never from Aberdeen. How do the kaito rides from Aberdeen to Lamma and Cheung Chau compare to the ferry rides from Central in terms of such as smoothness? If you think it's similar or even better, I'd be willing to give them a try. (On the other hand, I feel that the kaito from Stanley has more convenient departure times to Po Toi than those from Aberdeen -- so will stick with that route for Hong Kong's southernmost island.)

In Aberdeen Chuen Kee only operates the route to and from Picnic Bay vie Mo Tat Wan. For my hikes in Lamma I usually go to Mo Tat Wan and back from Yung Shu Wan.

Tsui Wah operates all others routes. That include:

Tsui Wah's boats are slightly bigger, but not as big as other operators out of Central. If I am going to Cheung Chau and Lamma and if my schedule and theirs match, I would rather go through Aberdeen as I live in Apleichau. I could avoid the crowd in Central too.

Tsui Wah's pier\barge is closer to the bus terminus where Chuen Kee's pier is right next to the Fish Market, just a little bit to the west from the Apleichau\Aberdeen kaito pier. The schedule of the routes could be found in the respective homepages of the operators.

Last time when I went to Cheung Chau in December Tsui Wah was offering same day round trip tickets for $50. I am uncertain if they are still offering such though.

Living where I do, the Central ferry piers are more convenient to get to than the Aberdeen kaito piers, which I passed by when I was in the area yesterday. And yes, I did see the relevant schedules posted there. :)

I like your caption under the second photo: "fishing boats...in highrise building-flanked Aberdeen harbour." Also your third vertically-composed photo of a kaito with passengers adds to your archive of these busy, noble craft which ply the waters of Hong Kong...Way back when, I recall when Ap Lei Chau had a boatbuilder's yard.

I was inspired by your comments to search for information about Ap Lei Chau boatbuilder's yard(s) and came across the following page with some amazing photos from a time when Aberdeen Harbour was way more crowded than it is these days (and Ap Lei Chau had way fewer buildings than now)...

Thanks for your link to global-mariner. Actually, I'm familiar with this site and the photographer, Karsten Petersen. Somehow I missed seeing these Hong Kong photos until you drew them to my attention. The photos of Aberdeen-Ap Lei Chau and other parts of Hong Kong are just incredible! Thank you. Happy full moon!

I find Karsten Petersen's photos of old Hong Kong really interesting -- not least in giving a good sense of how different Hong Kong was just a few decades ago. Happy full moon to you too. Did you see the eclipse? :)

No, regretfully I did not see the eclipse.

Ah well, no major loss, I'm reckoning. If nothing else, I must admit to not having deemed it worth waking up extra early to check out! ;)