A satisfying meal at an indoor dai pai dong 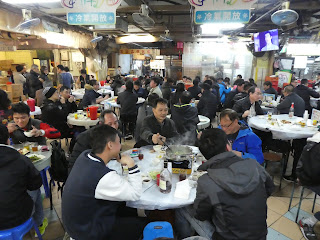 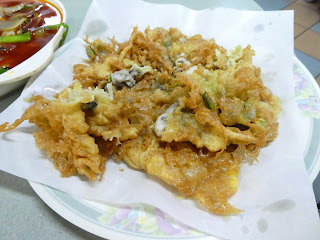 Sea snails in sauce as spicy as it looks! ;b
"Let's go eat at a dai pai dong", I suggested to a friend one winter evening.  But rather than dine at one located out in the open air, we headed over to a stall in the bustling cooked food center section of her neighborhood Municipal Services Building that almost looked too "authentic" to be true and got me wondering for a moment or two if I had stepped straight into a Hong Kong movie!
The very well patronized eatery that we dined at that evening doesn't have an English name and neither does it have an English menu.  But even if its picture menu isn't as extensive as its Chinese one, it does list the highlights -- which both my native Hong Konger friend and I found intriguing and ample enough to satisfy us.
Happy to find Chiu Chow as well as Cantonese specialties on the menu, my friend set her heart on ordering the Chiu Chow style oyster pancake -- which was fine by me as I like that dish too.  And when our order came to the table, we knew we had made the right choice as it really was very tasty -- with the stir fried eggy bits being alternately fluffy and crispy, and the overall dish feeling far less greasy than lesser versions.
We also enjoyed my choice for the evening: sea snails in spicy sauce which actually wasn't as burning hot as I feared it would be but still definitely had a fiery kick.  In retrospect, part of me wishes that I had dipped some of my share of the oyster pancake into that sauce.  (Actually, an even better option would have been to bring the bottle of Maggi Chilli Sauce that represents a taste of home for me, and which I think goes great with fried things, be it chicken, fries or eggs!  And no, I don't think the folks operating this unpretentious eatery would have been upset if I had poured some of that sauce onto one of their dishes!)
In addition, since both the other dishes we ordered can appear more "snacky" than filling, we also decided to get a plate of mixed vegetables and bowls of white rice -- to make sure our stomachs would be full but also that the meal would feel more balanced.  As it turned out though, we struggled to finish all the food, however tasty so much of it actually was, because the portions dished out actually were far more generous than we expected!
Leaving the cooked food center using a different route from the one that we had used to get there, we saw that seating for the stall had flowed out into an adjacent outdoor space.  So we could have dined outdoors at that dai pai dong after all!
Considering though that even indoors, the temperature was so low that pretty much every diner there had kept their jacket or coat on, perhaps it was for the best that we had gone for the indoor dining option.  And even while there were a few smokers in our midst (despite there officially having been a ban on smoking in eateries for some years now), there actually was sufficient ventilation to make it so that my clothes and hair actually didn't smell of cigarette smoke or, for that matter, strong cooking aromas post dining there!
Posted by YTSL at 11:59 PM

The only disadvantage of these venues, similar to traditional Dim Sum Restaurants, is that they are quite noisy. The open-air section should be better but won't do any good if the weather is bed. In extreme cases one could hardly hear a word spoken by the person sitting on the other side of the 8-10 person table.

I would usually bring along ear-plugs for a little peace of mind while enjoying food.

Some of these venues are noisier than others, with the Java Road Cooked Food Market generally being the most raucous that I've been to. To give an idea how bad: sometimes I have problems hearing the person sitting right next to me! But if you're in the mood, that noise actually just adds to the atmosphere for me. Cigarette smoke, on the other hand, I can be less tolerant about!

And thanks for the Chiu Chow restaurant recommendation. I'd like to try it some time if I can get friends to join me. There are a couple of others that I like over in Kowloon City: Chong Fat; and Lok Hau Fook, which I will forever associate with Johnnie To Kei Fung's "The Mission"... ;b

Looks like a fun place to eat. And just looking at everyone eating and enjoying themselves I can understand that the noise level might be high.

I think that when everyone around you looks to be enjoying themselves and their food, it's hard not to do likewise! ;)

Good to see that Dai Pai Dongs still exist in 21st century HK. Not the same old time atmosphere as your street corner hole-in-the-wall places serving up the best Stir Fried Clams in Black Bean Sauce but at the same time crawling with cockroaches, but this is probably better for everyone's health. That said, that's why I love Macau so much for its movie scene atmosphere!