An evening encounter with a film (or is it TV?) crew in Central 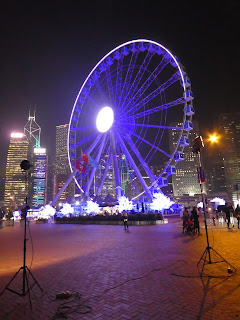 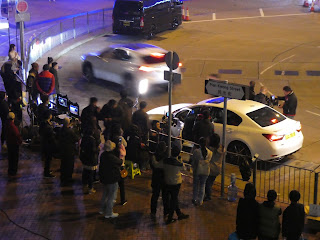 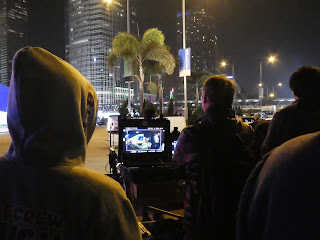 Action?! ;b
As I strolled about Hong Kong this evening (post viewing a film at the cinema, as a matter of fact -- albeit the a distinctly non-Hong Kong one), I got to thinking that at various points that it felt like I was walking on a giant movie set.  One reason is that I had passed by a number of places which I've seen featured in films.  Another is that, well, parts of Hong Kong look like they were built to have movies shot in them in terms of being so photogenic and/or atmospheric!
As it so happened, while passing by one of the more visually attractive locales (i.e., near the eastern side of the Central ferry piers), I noticed that a crowd had formed.  And upon closer investigation, I got to realizing that filming was indeed taking place.

The scene in question involved a car with an actor and an actress in it.  Interestingly, the crew and cast didn't seem to mind the presence of a number of curious onlookers getting up pretty close to the action, and getting such as clear views of the images on the monitor that the director looked to be using to see what was being shot.  And, in fact, the only disruption came by way of a security guard who didn't appear to have been given advance notice that filming would be taking place in that area, and consequently sauntered onto the scene to make inquiries as to what was going on.
Something else I found interesting was that whereas seemingly every Asian passerby got drawn to the scene to find out what was going on, pretty much every Westerner who was in the area proceeded to go out of their way to give the crowd a wide berth.  Perhaps the latter worried that trouble was brewing; this despite the vibes being on the laidback side and there hardly being any commotion in process.  The thing is that I can't imagine that they'd be as likely to encounter filming in progress when strolling about in their hometowns; that is, unless they hailed from Los Angeles or New York!
And for the record: no, this was by no means the first time I happened onto people filming in Hong Kong.  Still, each time that I do so, I hope that I'll recognize the scene in a movie I view at some point in the future.  Sadly, however, that actually has happened only once thus far as it seems like there are more TV than feature film crews out and about in Hong Kong these days.  So I wouldn't be surprised if it turned out that I had once again come across TVB folks at work after all... though this time, it's true enough that I checked but couldn't see any TVB logos on the cameras and other equipment! ;S
Posted by YTSL at 11:55 PM

I like the shot you captured. Interesting about westerners giving it a wider birth. I tend to stay out of the way when I think filming is in progress. In NY when I've spotted anything that looks like a film underway it seems like the area close to the filming has been blocked off. I don't make it to Manhattan very often but I do recall at least one time like that.

Interesting point about areas close to filming being blocked off in New York. Once, when I was in Philadelphia, I walked close to a filming location. It actually felt more like in Hong Kong, with not that big a deal being made about the filming taking place. Maybe that's the difference between filming for TV versus a movie -- or a super big budget work versus one that's less so! ;)

"An evening encounter" is an apt description for this entry. Anyone who has ever come upon a film (or tv) crew at night, knows what an unusual and surreal experience it can be. Your top photo could be a massive art installation or better still, a film about an Alien landing. It may be an overused description, but Hong Kong's background skyline does indeed look "futuristic."

New subject...Concerning the past. I mistakenly believed that the State Theatre in North Point had been demolished years ago - which is why I was so pleased to discover via online sights, that the building still stands. At one site, I noticed you left a comment. May I ask you: do you think the building is worth saving and, have you ever been inside the building?

That Central skyline is indeed quite something, especially at night. And no, I still can appreciate it after all these years... ;)