Fired daily, but never in anger: the Jardines Noonday Gun 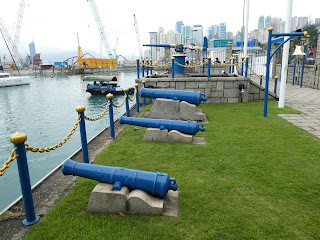 Have any of these cannons ever been fired in anger? 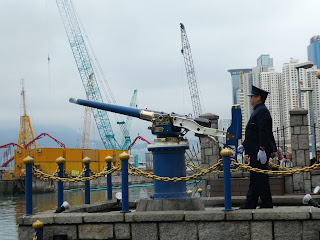 The (in)famous Jardines Noonday Gun that gets fired daily!
"Mad dogs and Englishmen go out in the midday sun."  Thus goes a line in a Noel Coward song that I learnt about decades ago as a child growing up in Malaysia, one of the many former British colonies whose achieving of dependence brought the sun down on an empire which used to be so vast that at any time of the 24 day, at least one part of it would be seeing daylight.

Another line in that very same song -- which was first performed back in 1931 -- states that "In Hong Kong, they strike a gong and fire off a noonday gun."  And while the gong has been replaced by a shiny brass bell, the three-pound gun nearby is indeed still fired at noon each day (as well as at midnight each New Year's Eve since 1946)!

Many years ago, the Hong (that's still going strong) known as Jardine Matheson had its main offices and warehouses in the area of Hong Kong that's now part of Causeway Bay, and also maintained its own gun battery and detachment of guards there.  And at some point down the road, it became custom to give a gun salute to the head of the trading house whenever he sailed into or out of the company port there.
One day, the story goes, a senior British naval officer became annoyed as well as appalled when witnessing this practice which, as far as he was concerned, should only be reserved for military commanders.  He therefore slapped Jardines with a penalty involving their being required to fire their gun at noon every day for perpetuity!
Although I've passed by -- or taken friends to have a look at -- the Jardines Noonday Gun site several times before, I had never witnessed the actual daily ceremony which involves a Jardines employee ringing the bell and firing the gun before until yesterday.  Having arranged to meet a friend for lunch in Causeway Bay at 12.15pm, I realized that I had time to finally see the famous gun minus its usual protective cover and in action.

Upon getting to its location by the Causeway Bay Typhoon Shelter (and, actually, just meters away from the floating Tin Hau temple that's well known among locals but far less of an international tourist attraction), I found quite the international crowd (which included native English, Mandarin, Japanese and Korean speakers) assembled there to witness what's actually quite a modest ceremony, albeit one involving a gun that can make a pretty loud noise.
One nice bonus is that after the Noonday Gun is fired, the public is allowed into the area where it has been installed -- which happens to be the first plot of land to be sold by public auction in Hong Kong, and purhcased by Jardines back in 1841!  While quite a few people went ahead and snapped selfies or had others take photos of them with the gun, I was content enough to enjoy the rare experience of standing and walking about a bit on non-reclaimed land right by Victoria Harbour! ;b
Posted by YTSL at 10:48 PM

The gun had been swapped. I believe the previous gun is now installed in Tsimshatui, the former Water Police Headquarters. I grew up in the area when the previous gun was located in the former coastline, at the site of WTC\Excelsior Hotel. That older gun was bigger and much louder, terrorizing kids and babies around the blocks at noon.

I've read that the current gun is a three-pounder that replaced a previous six-pound gun in 1961 following complaints about the noise of the gun. That one you grew up hearing also isn't the original gun -- which disappeared during the Second World War, when Hong Kong was occupied by the Japanese.