Delicious steamed hotpot at the Mongkok branch of Chiu Fook 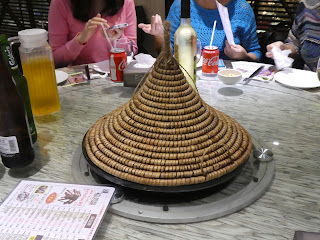 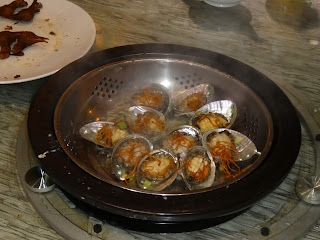 Goodies like this generous amount of abalone, that's what! :O 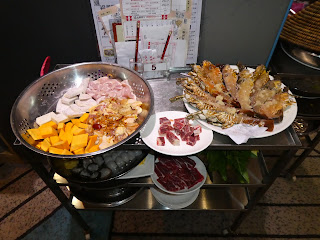 And yes, all of the items in the above photo were
destined to be cooked in that steamer too! ;b


As a kid in Malaysia, I used to enjoy meals involving something called steamboat from time to time, including at dinner each Chinese New Year's Eve.  In Hong Kong movies, family members, groups of friends or a set of Triad gang members often are depicted dining on something similar known in Cantonese as da bin lo and rather generically in English as "hot pot"; and I will readily admit to feeling like I'm in a Hong Kong movie whenever I have it -- which is quite often as it is the favorite thing to eat of two of my local friends!


Recently, there's been a trend here in Hong Kong for a variation on the hotpot theme: something called steamed hotpot that involves, as the name implies, steaming food underneath a conical straw hat covering, rather than cooking the food in boiling broth. Considered healthier than regular hotpot, the ingredients of choice to be steamed appear to be predominantly seafood though there also was a selection of vegetables and meats on offer at the Mongkok -- yes, that famously Triad-infested part of the Big Lychee immortalized in movies such as One Nite in Mongkok and Mongkok Story! -- branch of steamed hotpot specialist Chiu Fook where I dined with a large group of friends one cool evening this winter.


If truth be told, I'm not sure that the steamed hotpot dinner we had was all that healthy -- since it involved incredibly generous dinner sets that included free-flow beer and wine along with juices and other soft drinks together with sizable portions of food that included prized ingredients such as abalone, lobster, oysters and scallops along with mussels, razor clams, round clams, various types of meatballs and chunks of chicken and pork!  Oh, as though all that wasn't enough, the restaurant also threw in a large dish of roast pigeon with enough birds for everyone to have at least two whole pigeons each as well as one bowl of soup per person!


What I can pretty unequivocably state though is that much of the hours-long multi-course meal was super delicious; and this included the flavorful congee served at the end that contains the juices of whatever had been steamed earlier.  A measure of how yummy that final dish was can be seen in my having consumed all of it; since I am one of those people who are not fans of congee -- and, in fact, will usually only eat this rice porridge/gruel when I'm feeling unwell!  And perhaps due to how tasty it was, some of the people at the table actually pronounced themselves ready to eat some more after consuming their bowls of the congee -- rather than feel filled up by it!

Among the most amazing things for me whenever I go have hotpot with people here in Hong Kong is how some really petite women get revealed to be able to eat a tremendous lot!  I guess they stay thin (or, at least, not fat) because they burn a lot of energy over the course of their daily life here in this high energy -- and often high stress too -- place.  And I guess that making sure to get some daily exercise -- including by walking a minimum of 10,000 steps a day -- helps to make it so that one can enjoy one's food and devour as much of it as one desires! ;S
Posted by YTSL at 11:22 PM

Its been a long time since I stopped by and wanted to say hello :)

It certainly has been a while since you last stopped by. Thanks much for commenting and saying hello again! :)

I had to look up what tagine (or tajine) are and from what I've gathered, they are clay pots whereas the coverings for the steamed hotpot are made of straw. However, it's true enough that they're both conical and used for steaming food. So I guess it's at least partly true that Hong Kong has married Moroccan tagine with abalone and lobsters, with delicious effect! ;b