Not your usual MTR trains and rides on the South Island Line! 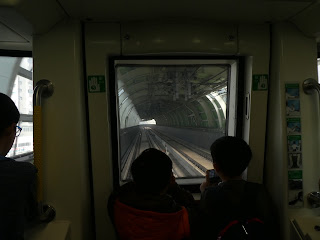 On driverless trains, passengers can get quite the view
when they stand at the front of the very first carriage! :b 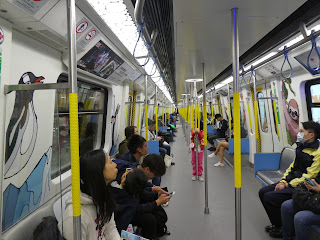 And on some of those driverless trains in Hong Kong, one also can
gawk at images of various animals on the carriage walls! ;D
Last October, two new stations -- Ho Man Tin and Whampoa -- opened on the MTR's Kwun Tong Line.  Even more exciting for local train spotters was the opening on December 28th of the MTR's entirely new South Island Line that has five stations between Admiralty, in the north of Hong Kong Island, and South Horizons, over on the western end of the even more uber densely populated island of Ap Lei Chau.
The MTR has trumpeted the fact that with the commencement of operations on the South Island Line, its train service has now been extended to all of Hong Kong's 18 districts.  And it is indeed quite amazing how quickly one can get from what previously had felt like far away parts of Hong Kong to the administrative and financial centers of the territory over in Admiralty and Central.
Less widely publicized by the company is the fact that all of the trains operating on the South Island Line are driverless.  When coupled with their carriages having been made in China (rather than British made and Australian refurbished, as has previously been the case) and the line suffering power outages on its second day of operation, it's understandable that some people have expressed reservations about this new MTR line that they don't about the older ones.  And this even before the publication of an EJ Insight article drawing attention to the lime colored line's trains only having three carriages each, and the stations' platforms being narrower than the norm.
So it was with fairly low expectations that I went on the South Island Line one day last week -- and maybe that was the right frame of mind in which to approach the experience because, as it turned out, I thought it actually pretty pleasant!  For starters, its stations and trains don't appear to be anywhere as crowded as I had feared would be the case.  And while it's true enough that I wasn't there during rush hour, I honestly did worry that we'd be packed like sardines on at least the section of the ride between Admiralty and Ocean Park (whose visitor numbers are in the thousands daily, and the millions annually)!
Looking at things with a critical eye though: I have to say that the new train carriages do have the "dinky", plastic-y feel of those on the East and West Rail lines rather than the more solidly metal feeling of those on the Island, Tsuen Wan, Kwun Tong and Tung Chung lines.  And there's something fairly disturbing about the large number of security cameras installed in each carriage.  In addition, the new train stations appear to need some finishing touches to their design as they currently lack the requisite aesthetic polish as well as visual homages to their neighborhoods found in other MTR stations.
On a more positive note, however: One visual upshot of the new trains being driverless is that one is privy to some really cool views if one stands at the front of the first carriage and looks out of the windows there; something that a number of people -- kids and adults alike -- appear to have quickly figured out.  Another nice touch -- which I hadn't expected -- is that at least one of the trains looks to have the walls of its carriages permanently decorated in a way that befits one of its stops being Ocean Park!  Maybe all this will get old soon for some but for now, it's obvious that some of the passengers did find amusement in these aspects of the train and consequently had their rides feel enlivened, even fun, rather than just prosaic and entirely routine! :)
Posted by YTSL at 11:27 PM

Never been on anything like that before.
Coffee is on

So far even at peak hours, it didn't feel that tight. At least, not as tight as the Island\Tsuen Wan\Kwun Tong lines. One can still move around fairly easily while on the South Island Line but you wouldn't be able to move on other lines without elbowing or stepping on others.

For the sake of other readers, the South Island Line is the third driver-less system in town. The first being the transit-rail inside HKG International Airport. The second being the Disney Line MTR Extersion.

I get the feeling there aren't too many trains in your neck of the woods. All in all, Americans don't seem to have a love affair with trains the way they do with cars.

Do you think that the South Island Line will eventually get super crowded? One would think so given that its stations include ones on Ap Lei Chau and at Ocean Park!

And good point re the South Island Line not being the first of Hong Kong's driver-less lines. But it's definitely the longest of the three!

Apleichau is still one of the most populated area if not the most densely populated island in town. If every able body on the island go out at the same time then we islanders could clot up all public and private transport available any giving time. Fortunately this had not yet happened.

We shall see in a few month's time.

It does sound like many of the residents of Ap Lei Chau -- the world's second most populous island -- are sticking to other modes of public transport other than the MTR or staying on the island, at least during rush hour. It will be... interesting to see how things pan out in the future, particularly since there doesn't seem to be much room for expansion as far as the South Island Line trains and their platforms are concerned!