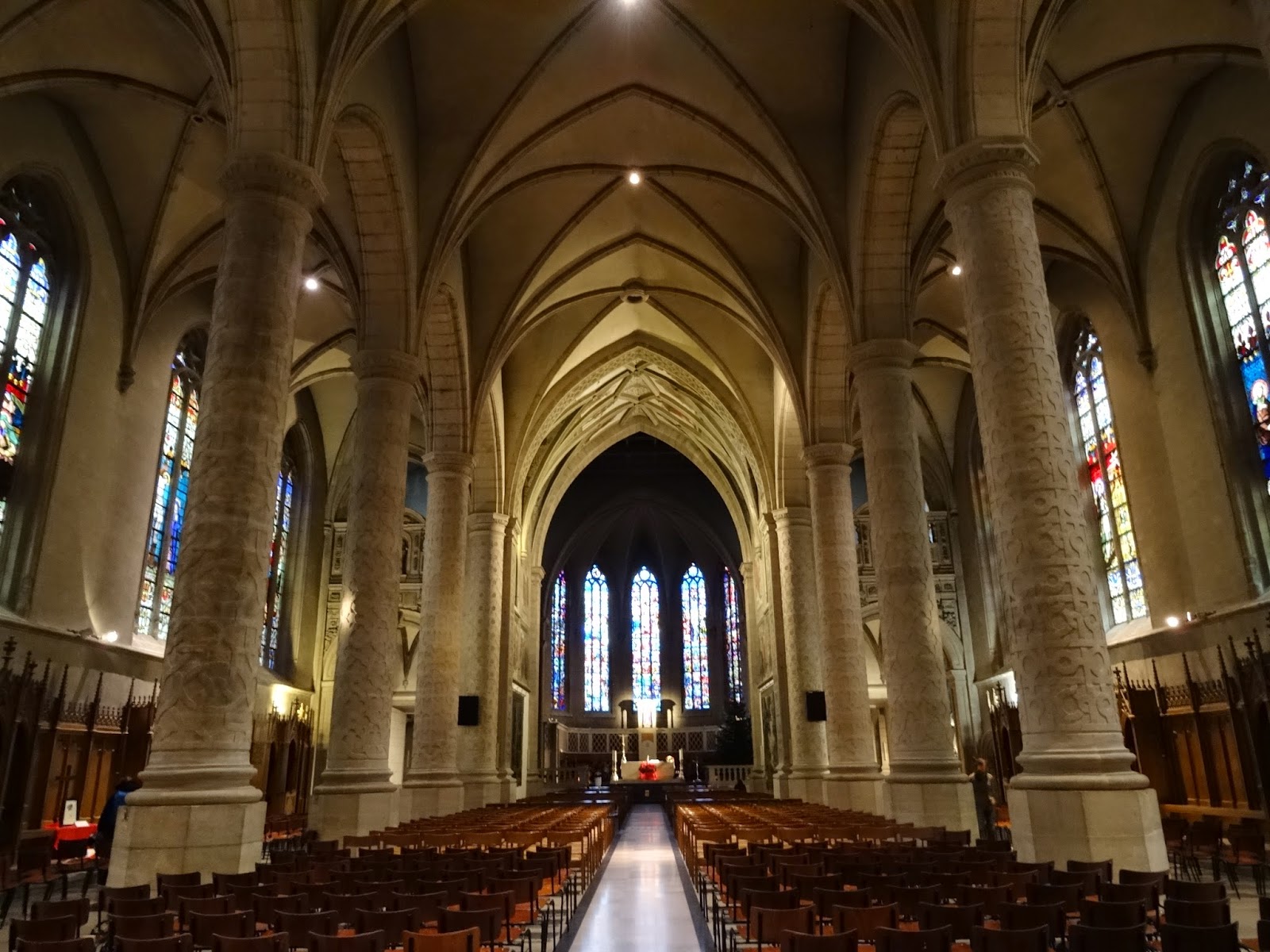 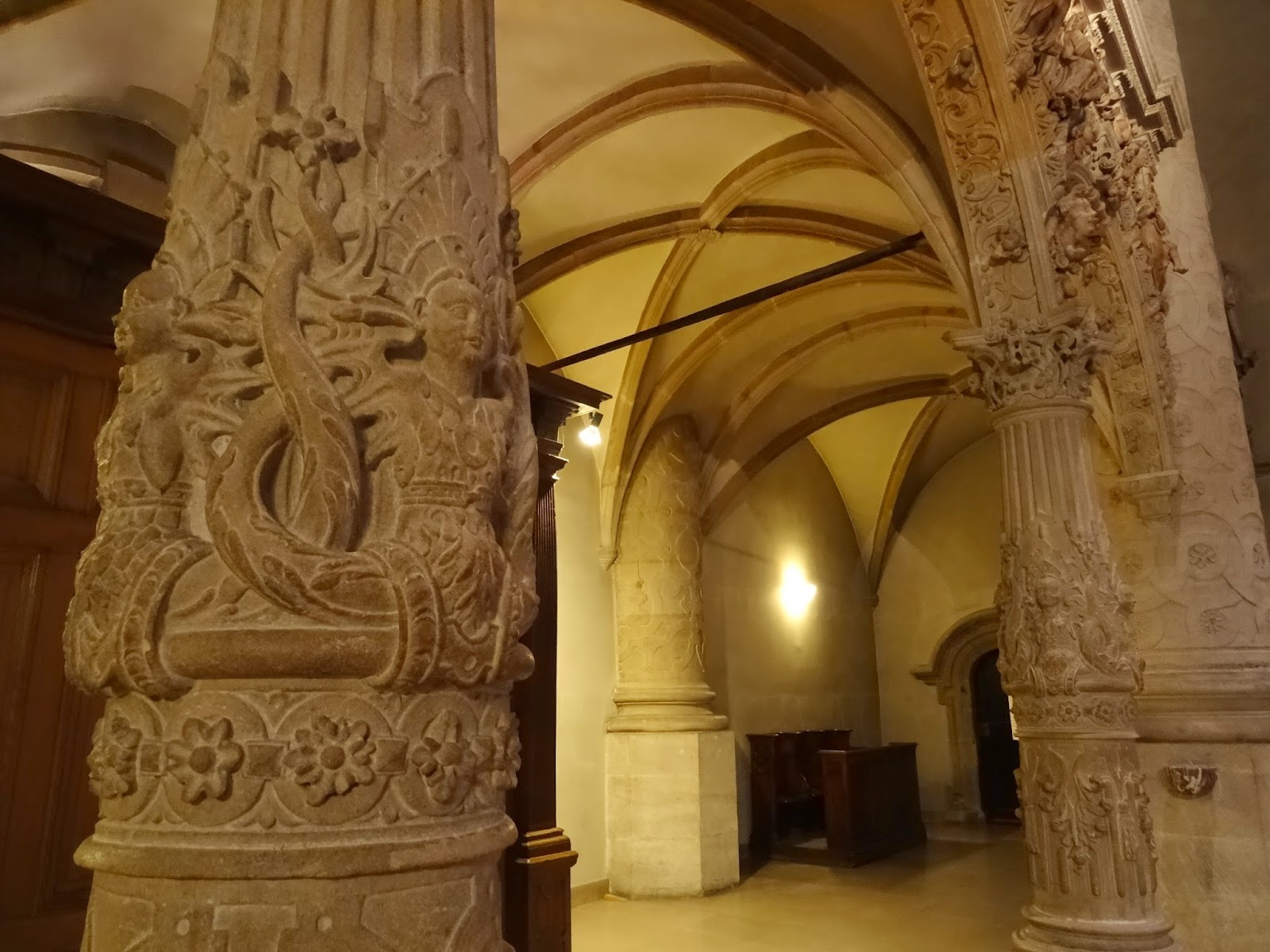 Not your usual European cathedral sights -
Indian-inspired design elements among the columns! 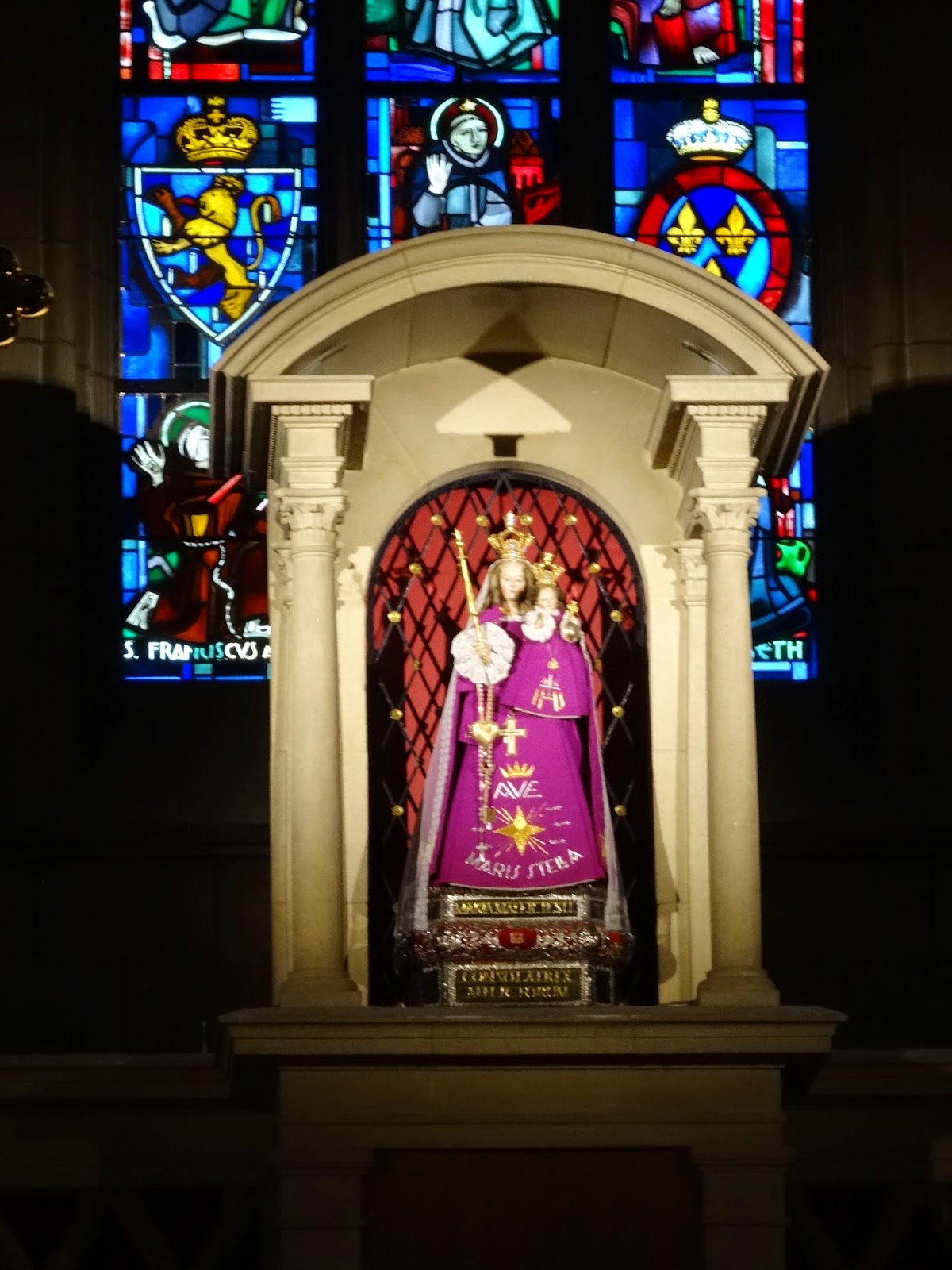 Another unusual presence in the cathedral is that of
a Madonna whose clothing is regularly changed!

On the first day that my German friend and I were in Luxembourg, we opted to go on a guided tour offered twice a week by the Luxembourg Tourist Office known as the Wenzel Circular Walk.  Lasting two and half hours long, it was very informative -- and close to being a personal tour thanks to there being only one other person going along it!  -- and all in all, we're glad that we went on it.

Among the places we stopped at on the tour was the Cathedral Notre Dame which, as our guide informed and proceeded to show us, was a former Jesuit church with Gothic and Renaissance elements that was considerably enlarged in the 20th century.  And among the visual highlights of this building pointed out by our extremely knowledgeable guide were columns in the older section of the cathedral that contained Indian motifs to commemorate the Jesuits' presence in India, and a Madonna figure displayed in the newer part of the cathedral whose clothes are regularly changed.

I'm not sure if I would have noticed these elements if the guide hadn't pointed out -- so there are indeed benefits to going on guided tours if the guide does his research and is good at communicating it, as was the case with the one we had in Luxembourg.  At the same time though, it's also true that one of the reasons why I generally prefer to go about on my own (or with a travelling companion as compatible as my German friend) is that this way, I/we can go about exploring and checking out stuff, etc. at our own pace -- and thus be able to linger whenever we want, etc.

So it was nice to have time to do just that in Luxembourg as well as go on the guided tour.  As it so happened, the day after we went on that tour, we returned to several sites that we felt that we had overly-hurried through or past the day before, including the cathedral.  And at the very least, it was only on our guide-free visit that I felt that I had enough time to more fully appreciate the sights and take the sort of photos I liked of those very elements -- and more -- that had been pointed out on the guided tour the previous day!
Posted by YTSL at 11:30 PM

This is a compactly informative photo-essay of the cathedral. ...Most interesting for me is the "Indian-inspired design elements among the columns." Very unusual to see this touch of Hinduism in a cathedral...And there's nothing quite like the freedom of traveling and "exploring at one's own pace."

I'm not sure I would go so far as to describe the images as Hindu rather than Indian -- but yes, they're definitely unusual to find in a European cathedral nonetheless!

And yup, as I think you know, I do tend to eschew guided and/or group tours for the most part. Still, have to say that if all guides could be as informative and enthusiastic as the guide I had in Luxembourg, I'd be more willing to go on my tours during my holidays!