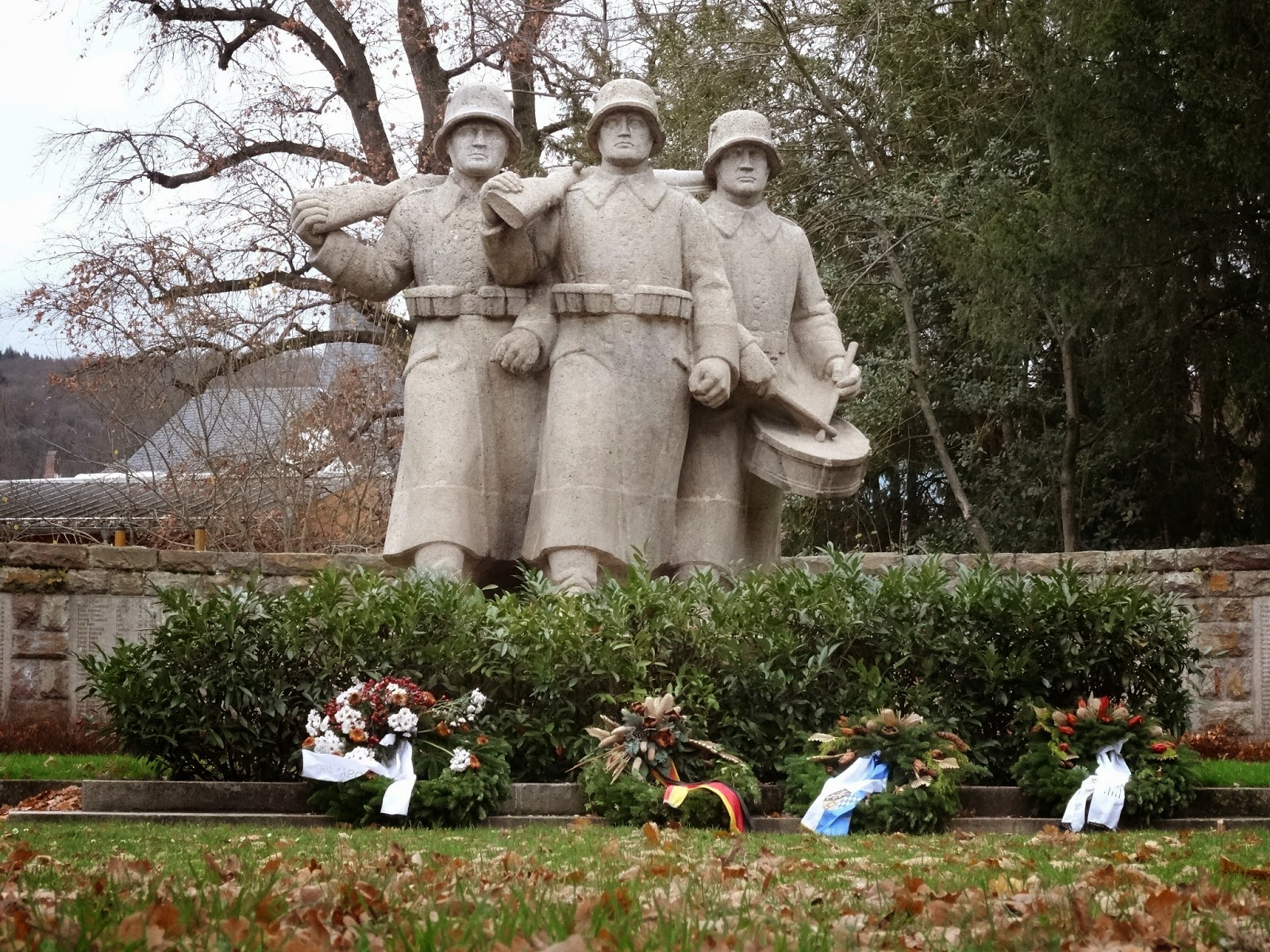 The war memorial at Weinheim can startle,
especially upon first glance Even though the Second World War ended close to 70 years ago now, there are many people who still primarily associate two of my favorite countries to visit with it.  And although it's true enough that I don't often think of the war that, after all, occured several decades before I was born when visiting Japan or Germany when there, it's also the case that every once in a while, I encounter sights that do get me thinking of the terrible things that happened during that period in history when it often seemed like the world -- and particularly the Japanese and Germans -- went (temporarily) insane.


Sometimes, it can be something as innocuous as passing through a section of a German town or city with the sign "Judengasse" (Jewish alley) and realizing that no Jews live there anymore.  Then there was the war memorial my German friend and I passed by in Weinheim that got her recoiling in shock and my wondering whether the likes of me would be welcomed in that town.

As it so happens, I actually received a warm and enthusiastic welcome at the tourist office and later was treated very nicely at the Woinemer Haubrauerei, particularly after it was recognized that I was -- as my German friend described -- a "beer fan"!  And what my German friend had taken to be statues of Nazi soldiers adorning a war memorial were later identified by another friend of mine who knows military stuff pretty well to be those of first world war German army combatants.


Still, rather than try to brush away or bury their Nazi past, contemporary Germans tend -- if my German friend is any guide -- to openly admit that way too many horrors were committed under Adolf Hitler, with the idea being that keeping knowledge of this alive will ensure that the past horrors will not be repeated any time soon.  And thus it was that she and I both were intrigued to learn that in Trier, brass plates bearing embossed inscriptions had been set in the pavement all over the city to memorialize and commemorate the victims of National Socialism.


Despite our making a point to look out for those "stumbling blocks", however, neither my German friend nor I spotted a single one in Trier -- and it wasn't until the final full day of my German holiday, when we were strolling around the aldstadt (old town) of Freiburg im Breisau (or just Freiburg for short) that we encountered those inspired cobblestone-sized creations of German artist Gunther Demnig.

Located in front of the former homes of victims of Nazism (including Jews but also homosexuals, political dissidents, Roma "Gypsies" and such), these "stumbling blocks" are items my German friend and I sometimes would literally stumble across on our amble through Freiburg.  And almost needless to say, the sight(ing) of them would cause us to stop in our tracks and pause for a bit before going our way once more.

Also, yes, the sight of these items is indeed sobering -- but I'm also very glad of their existence; this not least because I do believe that "the past may serve" and that those who forget the past will be condemned to repeat it.
Posted by YTSL at 11:25 PM

Sadly, there will NOT be any statutes or anything to remember the (tens of) millions who starved and died during the Cultural Revolution and the Greap Leap Forward...

Again, there is so far zero statutes or commeration of what happened in that certain June Day in 1989 where thousands die for speaking their minds...

Even more sadly, since history is not learned, it will repeat itself again in HK when people in HK speak their minds and wanted to control their own destiny...I hope I don't have to see that again...

There may not be memorials of the Cultural Revolution, the Great Leap Forward and June 4th on the mainland but there's mention of those events in such as the Karl Marx House Museum in Trier, the June 4th Memorial Museum in Hong Kong, etc. And then there's the annual June 4th vigil in Hong Kong -- and long may that observance continue.

A thoughtful, well written photo-essay...The war memorial at Weinheim is a powerful and impressive piece of outdoor sculpture. After looking at these gray soldiers, I thought of Erich Maria Remarque's compassionate WW1 novel, All Quiet on the Western Front...This was also made into a touching Hollywood movie of the same name in 1930...This is a blog that will make one reflect on history.

Thanks for your kind words.

"All Quiet on the Western Front" is part of the ongoing Restored Treasures program at the Hong Kong Film Archive. Sadly, I've not been able to make the screenings of it -- but am at least happy to have managed to view "Paths of Glory", which also is part of the program.