A dinner to remember at a Kurashiki izakaya 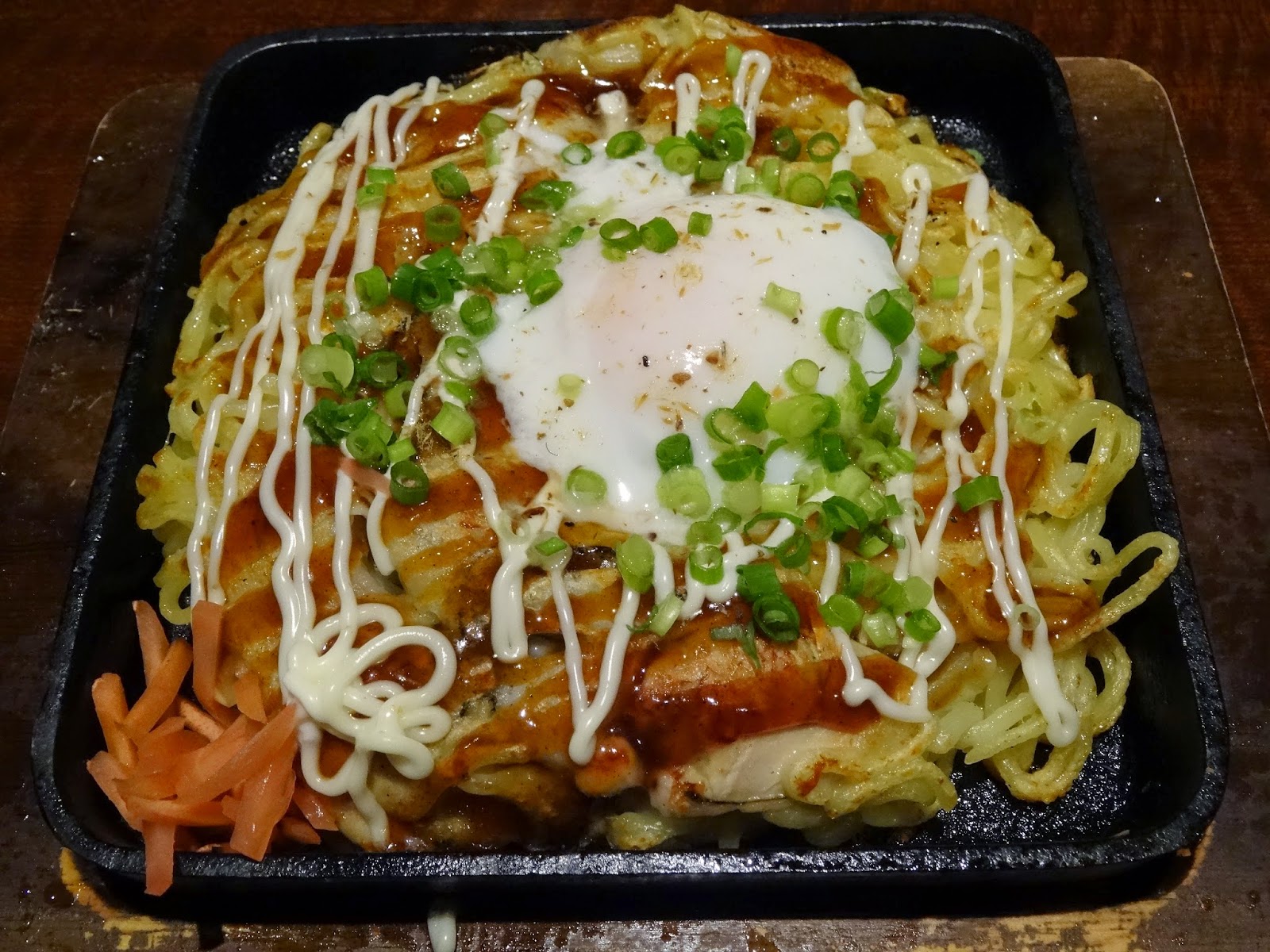 Now, that's what I call an okonomiyaki! :b 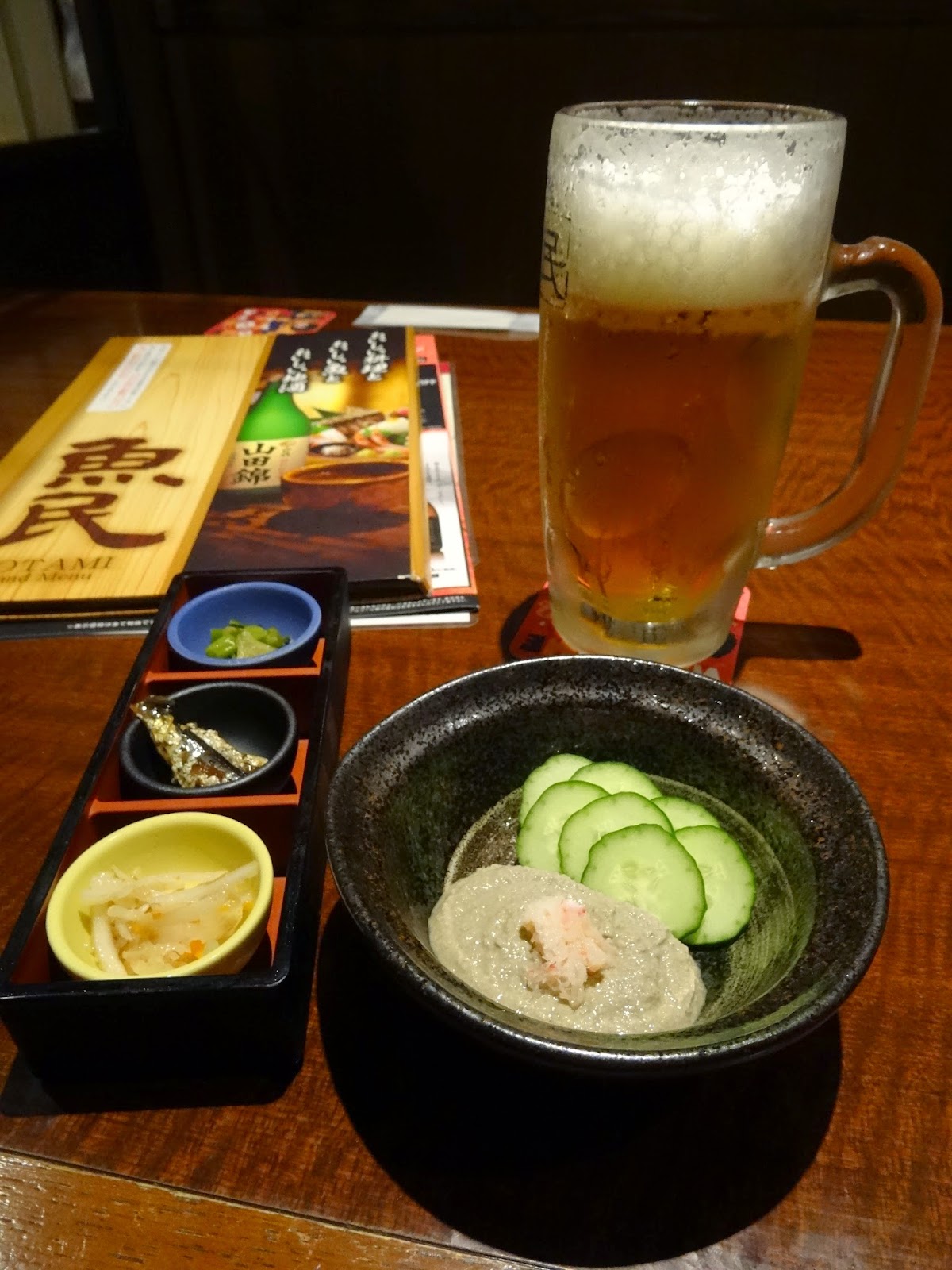 Some other tasty items on offer
at the Kurashiki branch of Uotami :) 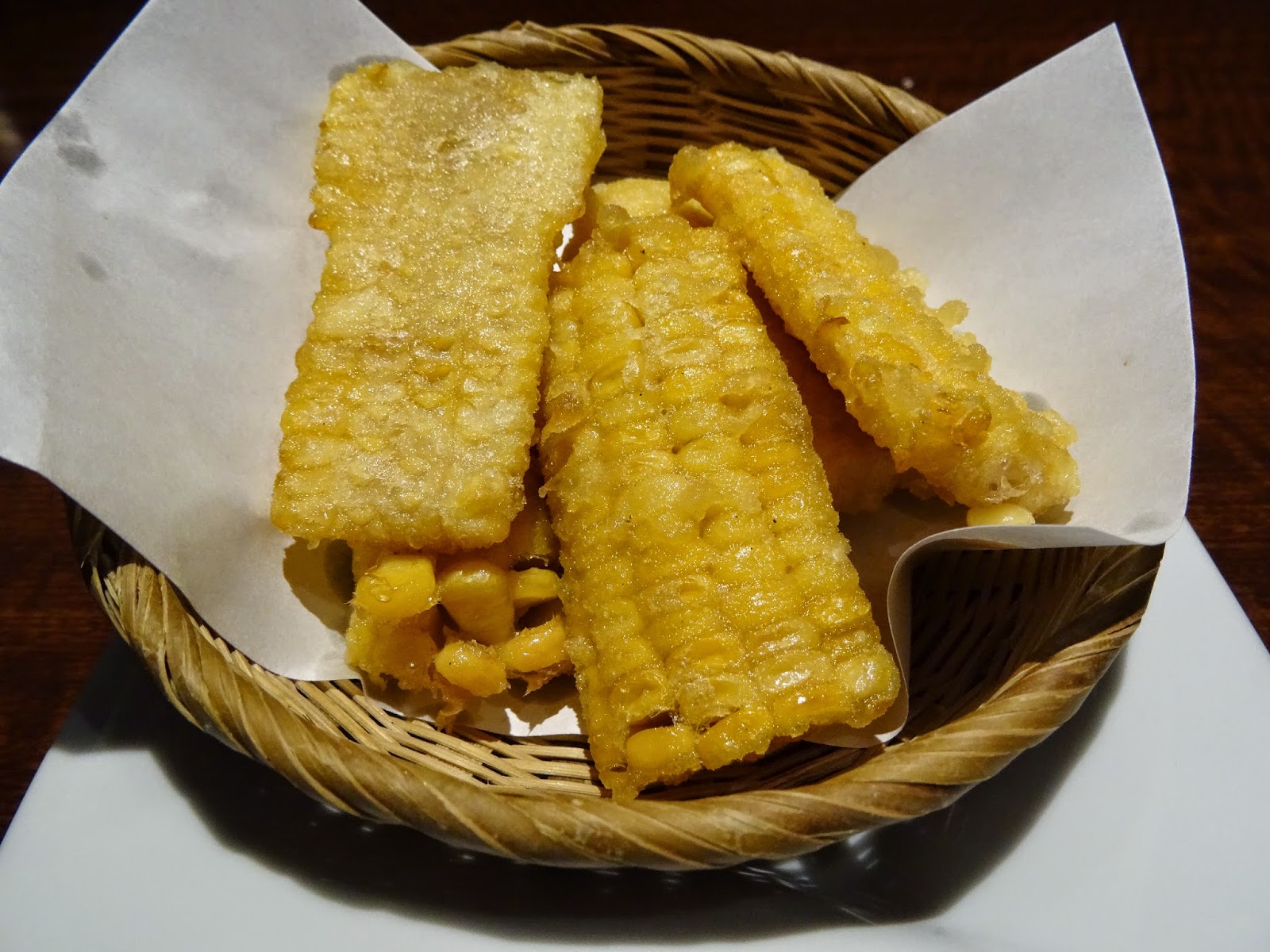 And of course I couldn't resist ordering some corn tempura
when I saw it on the izakaya's menu! :b

When most people think of Japanese food, sushi usually is the first thing that comes to mind -- and, after that, elegant kaiseki.  But while I've definitely had my share of those kinds of Japanese food (in Hong Kong and also Japan), I also am fond of dining in izakaya -- and would go so far as to say that they frequently are my "go to" places for dinner in Japan.


One reason why I love dining at that which have been described as Japanese pubs but which I think may be more like Japanese tapas bars is because the portions are usually small enough so that I can order more than one dish for dinner.  I also appreciate that izakaya menu tend to be wide-ranging and extensive, with some of those I've been to in Japan having more than 100 dish options! And this on top of  the food served at izakaya being ones that go well with beer or sake (or, if you prefer, sochu or some other alcoholic libation)!

Speaking of sake: At Sake Bar Ginn one evening, I had the good fortune to meet Kazuhiro Sakurai, the executive vice president of Dassai. As I told him, I must have drank hundreds, if not thousands, of liters of his company's sake (including the sparkling nigori along with the more "regular" junmai daiginjo!) over the past few years!  So it was a genuine thrill not only to end up sharing a bottle of his sake with him over dinner that night but also to discover how gentlemanly and fun to chat with he is.


In turn, I think the Dassai Guy (which is how I have come to think of him) was amused by my love for his sake, and also Japanese drinks and food in general -- a subject we spent a considerable portion of the evening enthusiastically discussing.  Somewhere over the course of our conversation, I mentioned that I'd like to visit Hiroshima -- which happens to be the nearest city to where he lives -- some day, in large part because of its famous oysters and okonimyaki. (And for the record, yes, I do think that Hiroshima-style okonomiyaki is superior to Kansai-style okonomiyaki -- sorry, Kansai!)


His response just about blew my mind: "Aah, but have you tried okonomiyaki with oysters?"!  For in all honesty, "regular" okonomiyaki -- containing such as okonomiyaki flour, eggs, cabbage and egg noodles (the last found only in Hiroshima-style okonomiyaki) and topped with mayonaise, okonomiyaki sauce, dried seaweed and bonito flakes -- already seemed good to me, and those topped with bacon and/or a fried egg pretty decadent.

Still, what really got me pinching myself to make sure I wasn't dreaming was my finding two other dishes I love on that same menu: kani miso (served at Uotomi with slices of cucumbers), and corn tempura (whose shape actually more resembles those that I pined for in Still Walking than those admittedly delicious ball-shaped ones at Yardbird). Washed down with a large mug of nama biru (draft beer) whose order included a few choice nibbles, my only regret at dinner that evening was that I was a train ride away from my hotel; otherwise, I really might have made a pig out of myself there! ;b
Posted by YTSL at 7:43 PM