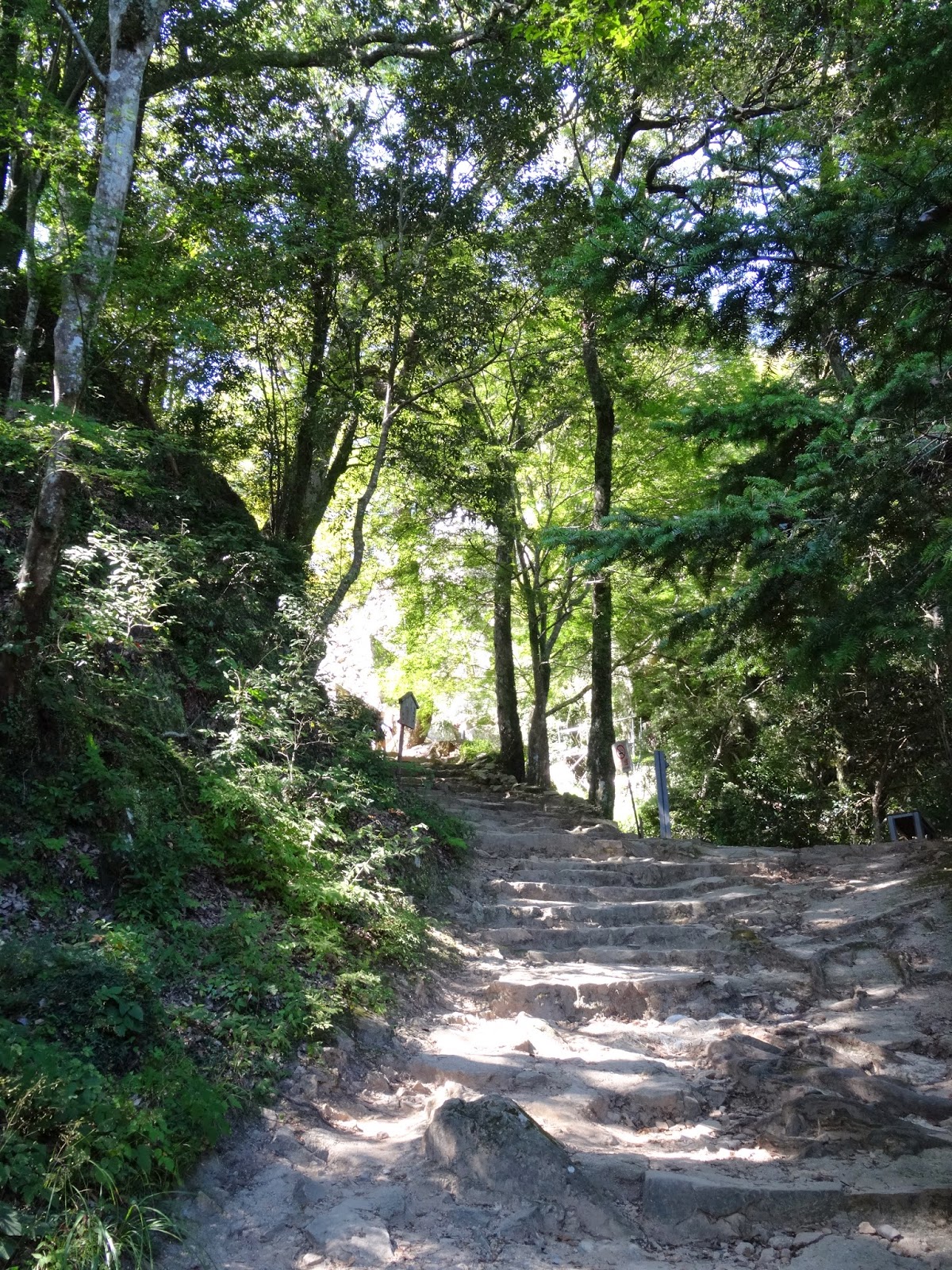 Not a sight I was expecting to see on
the first day of my September Japan trip! And lest it not be clear: it was the longest --
and largest -- snake I've seen in the wild! :O

Before my September 2014 visit to Japan, I told a Japanese friend about having seen a snake slithering across the path that I was going along in Shirakawa-go last May.  Rather than thinking this was bad luck, she told me that I should be happy -- because to the Japanese, seeing a snake is a good thing!

Thus it was that when I caught side of a large snake slithering just meters away from me along a mountain path on the first day of my next visit to the Land of the Rising Sun, I told myself -- after calming down somewhat, especially after ascertaining from the shape of the snake's head that it was not poisonous -- that I should consider it a good omen.  And as things would have it, I did go on to have a vacation that I consider to be among the most enjoyable that I've had in Japan thus far.

Although I ideally would have written about this wonderful vacation soon after my return to Hong Kong, certain things -- notably the onset of the Umbrella Movement -- got in the way of my doing so. Still, while certain memories of this September trip may have faded, others have stayed very vivid -- including the hillside trail that I was on when I had my second snake spotting in Japan of 2014.

Earlier in the afternoon, I had been to Matsuyama Castle, Japan's oldest surviving castle and the only one of the original castles that survived the post-feudal age intact located on a mountaintop.  Earlier still in the day, I had flown into Kansai International Airport, taken two trains from there to Okayama and checked into a hotel in that city, and then taken another train over to the small city of Bitchu-Takahashi.

Upon getting into Bitchu-Takahashi, I was informed by the lady at the tourist information center that  the usual buses weren't running because it happened to be Autumnal Equinox Day and therefore a public holiday that day.  So I ended up taking a taxi from the city's train station to the nearest car park to Matsuyama-jo, about three-quarters of the way up the hill -- and after checking out the small but interesting castle perched atop 430-meter-high Mount Gagyu, decided to walk down along the clearly marked path back into town.

After I had got about 100 meters down though, I began to wonder whether I had done the right thing as the path started to get quite a bit steeper and more slippery (because of such as the large amount of uncleared fallen leaves on the trail).  And it also was the case that the path looked to be pretty deserted. But I just didn't feel like climbing some 100 meters back up on what was a pretty warm day for late September.  Also, I reasoned to myself, how difficult and dangerous can a path that lead up to a tourist attraction -- albeit one that's a spartan-looking mountaintop castle -- be?

Post having gone along the trail, I have to say that going down it alone is not something that really should be done -- and I have to admit that, even before the large snake spotting, I was filled with a greater sense of unease than I would have liked.  At the very least, I should have had my hiking boots on rather than just the regular sneakers I wear while I'm generally at leisure.  Also, it would have been good to have had some insect repellant handy as I also encountered quite a few swarms of mosquitoes hungry for blood along the way!

But after I completed the hike, I had such an adrenaline rush that I ended up happily walking all the way back to the train station.  It undoubtedly helped that it was a generally beautiful day and that Bitchu Takahashi has some picturesque parts (particularly the old part of the castle town).  All told, it really was a nice place to stretch my legs after a flight and three train rides -- and also adjust to the idea that I was on holiday and thus could do such as wander about at will, and at a pace that allowed me to look about and enjoy whatever sights grabbed my fancy. :)
Posted by YTSL at 11:26 PM

This is my kind of travel journal entry because it convincingly describes what it's like to first arrive at a travel destination, and then use local transportation to begin exploring...Sometimes it pays to improvise and "wander about at will," as you say...Regarding the snake, I recall reading that in certain ancient cultures snakes were a symbol of the "Goddess."...Therefore, the snake spotting may have been an auspicious beginning of a memorable trip.

Yeah, I do have plans when travelling but also allow myself the flexibility to improvise and wander about at will. This is especially possible when I'm travelling alone -- and so I can't understand those who think that to travel alone would be so very awful!

Re the snake spottings: I think I tend to take them as a sign that I really had gotten into parts of Japan that are off the beaten tourist track! ;b

I do have Bitchu Takahashi castle on my sight ... how much was the taxi ride from the train station to the castle car park?

Oooo, you're planning another trip to Japan soon? It's been more than a year since I went to Bitchu-Takashi but if memory serves me right, the taxi ride cost around 1,500 Yen.

Just a very preliminary concept for sometime in the next few years, which may or may not materialize. But Sanyo-Sanin has so many fascinating spots, so I was following your entries of Bitchu-Takahashi / Matsue / Iwami Ginzan etc with keen interest!

Thanks for checking out those entries. I've enjoyed my time in the Sanyo-Sanin area. From my trip when I based myself in Okayama, I'd particularly recommend going on a bike ride on the Kibi Plain. As for my time on the Sanin coast, I'd say that I enjoyed every day trip out of Matsue! :)

OK I'm back from Bitchu-Takahashi, more than a year after reading your entry!

We didn't end up taking the taxi -- we took the scheduled shared taxi from the Tourist Info Centre in front of the train station. Something like 500 yen per person per way. And on the way back we took another scheduled shared taxi from the same driver and asked him to drop us off at Raikyuji instead of the station. Everything worked without a hitch.

Welcome back to the blog! ;)

500 Yen's not bad at all considering the difference in elevation between where the Tourist Info Centre is and the highest part of the hill that vehicles can go. All things considered though, I still rather not take a taxi in Japan if I don't have to as they can be frighteningly expensive (for someone more used to taxi fares in Hong Kong!).