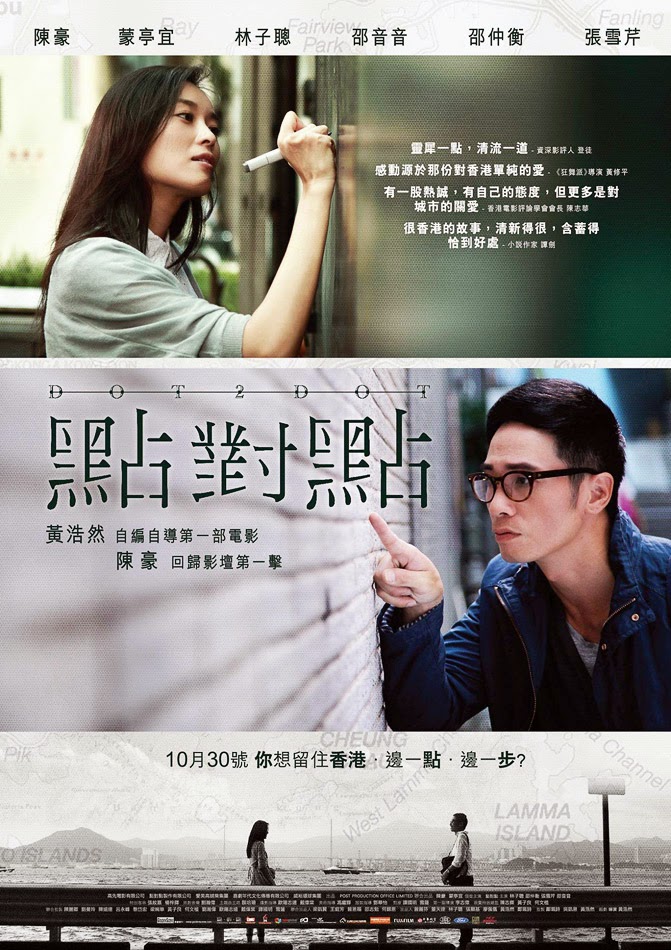 My favorite Hong Kong film of 2014

For those who know of Hong Kong cinema's regular output of over 300 movies annually in the 1980s and 1990s, 51 is an horrifyingly paltry number of films for Hong Kong to have produced in one year.  Yes, it's still more than many other territories -- but this is that whose film industry used to be unironically referred to as the Eastern Hollywood that we're talking about!

Quality-wise, much of 2014 did not look like a good year for Hong Kong cinema, or those who remain its fans either -- and I have to admit that there were times when I came out of a screening almost in tears, so despairing as well as disappointed did I feel as a result of watching a film that was not as good as the star and/or respected names attached to it had promised that it would be.

But in the last few months of the year, a number of Hong Kong films came along that made me have hope once more in the cinema whose output helped me to fall in love with Hong Kong all those years ago.  And yes, I definitely feel that I can recommend the following films that have made my top ten 2014 Hong Kong movies list!

This touching love letter to Hong Kong had its world premiere at the 2014 Hong Kong International Film Festival but I didn't view it until months later.  On paper, this drama revolving around a quiet returnee to Hong Kong from Canada and a shy Ph.D. newly arrived to the territory from China's Jilin Province doesn't sound all that intriguing or great -- what with it being an openly independent film by a first-time director that doesn't have any major stars in its cast.  But Amos Why's is a showcase of much that's good about the territory, its people and independent cinema.  Put another way, it's original, sincere and has compelling messages, not least for those who live in -- and love -- Hong Kong.

Chinese American filmmaker Ruby Yang, whose The Blood of Yingzhou District won the 2007 Best Documentary Short Oscar, returned to the territory of her birth, Hong Kong, in 2013. A distinguished fellow at the University of Hong Kong, she's partly been keeping busy by making an inspirational documentary about a group of secondary school students -- many of them from less privileged backgrounds, some of whom are seeing impaired -- along with those who got them involved in preparing for and staging a musical at the Hong Kong Academy for the Performing Arts.  Some of the individual story arcs may be predictable but it's also true that I ended up weeping with joy not just once but thrice when viewing this film!

There are those who won't consider this romantic comedy centring on a woman who doesn't act like your stereotypical (Chinese) female to be a Hong Kong movie since lead pair Zhou Xun and Huang Xiaoming are mainlanders, and its tale takes place in Shanghai and Taiwan but not in Hong Kong.  There also are those who won't consider it a 2014 Hong Kong release on account of it opening in Hong Kong on January 1, 2015.  But the fact that Pang Ho Cheung is its director, and has enlisted the help of a number of Hong Kongers to do such as co-write the script with him, edit the work and compose the music for it, gets me feeling that there are indeed Hong Kong elements to this fun film whose heroine is extremely likeable, not least for not conforming to stereotypes of what an alluring Chinese woman should be like.  And it's also true enough that it opened in a number of territories (including Mainland China but also the US!) in late 2014!

Mainland Chinese actor Chen Sicheng's directorial debut is another film that many people would not consider to be a Hong Kong movie -- and in this case, I think that there's indeed a case to be said for this being so.  At the same time though, the best part of this romantic film that tells the story of couples ranging from secondary students to those old enough to be their grandparents is undoubtedly that which has two stalwarts of Hong Kong cinema in Carina Lau and Tony Leung Ka Fai showing how charismatic they individually are and how winningly wonderful their chemistry, seen as long ago in 1993's He Ain't Heavy, He's My Father, continues to be.

5) Rise of the Legend

This latest cinematic reimaging of the Wong Fei Hung legend by Chow Hin Yeung (who now no longer wants to be known as Roy Chow) that went on general releaese in Hong Kong during the "Occupy" phase of the Umbrella Movement upset a number of people who think it anathema for the Cantonese folk hero to speak Putonghua. Consequently, they opted against checking the film out -- something that I reckon is really too bad because if they had done so, I think they would have found much to like and appreciate about this period martial arts drama, not least the socio-political and economic messages it contains that they undoubtedly would realize has pertinence to Hong Kong's current situation.

The first Pang Ho Cheung film I viewed in 2014 was one which I initially came away feeling rather cool about but which I discovered that I appreciated upon thinking and reflecting more about it.  An examination of a family with roots in the southern Hong Kong Island town of Aberdeen (known as Hong Kong Tsai in Cantonese, a phrase that translates into Little Hong Kong), much of this star-studded, yet often understated, drama can also be extrapolated and applied to Hong Kong at large and its inhabitants.  Its messages may not be the most upbeat or inspirational but they are worth noting all the same -- and they look to bear notice of one of Hong Kong cinema's enfant terribles having grown up, or at least be capable of greater maturity than he usually is credited with.

There are a number of stars from Hong Kong cinema's glory days of which it could be said that viewers would be happy enough just to see and hear them reading a phone book.  And while this retro-gangster drama-comedy's proceeding never get that trivially boring, the fact of the matter is that one does start feeling just that about the likes of veteran cast members Anthony Wong Chau San and Carrie Ng over the course of watching them in action.  Sure, there's a sub-plot involving a bad Triad who causes trouble for the "good Triad" played by Wong that helps keep things exciting but it's also true enough that the best scenes of this veritable "blast from the past" of a movie are those where Wong and Ng are doing such mundane stuff as having dinner with each other and two other individuals who they clearly do care for!

This Teddy Chen martial arts drama "had" me just by way of the generous amount of celebrity cameos to be found throughout the film and the sequence at the end which pays homage to Hong Kong martial arts movie heroes past and present.  But if that weren't enough, it also features some killer action from the likes of Donnie Yen, Wang Baoqiang and the array of kick ass opponents that the film's villain is presented with.  And while it does make some use of CGI, this film also has the likes of Charlie Yeung as well as Donnie Yen -- rather than just their stunt doubles -- going into the brown waters off Tai O... something that had me gasping with shock at the nerve, daring and sheer willingness of the stars to do what's needed for a movie that consequently felt more "authentic" in terms of its action sequences than many other Hong Kong films have in years!

This second follow up to Golden Chicken harks back to a time when Hong Kong filmmakers thought nothing of including comedy, drama, philosophy, vulgarity and pathos into a single movie.  Twelve years on after protagonist Ah Kam came into the limelight, she's ascended the professional ladder from prostitute to mamasan and in the meantime, the former "ugly duckling" actress who portrays her, Sandra Ng has cemented her status as Hong Kong cinema's reigning queen of comedy. Surrounding herself with established stars such as Nick Cheung and Louis Koo, Ng (who also produced the film) also shares the screen with Ivana Wong, whose first film this was, and showed much in it to have viewers looking forward to more movie appearances by the superstar singer.

Upon coming out of the screening of the first installment in a planned two film period epic, I found myself rueing the fact that I will have to wait several months to view the concluding portion.  Like with his previous Red Cliff, I'm wowed by the grand scale and ambitious sweep of the work -- and reckon that only John Woo could have envisioned the often jaw-dropping battle scenes that feature so heavily in what, at least in this particular segment, is primarily a war movie.  And okay, yes, the romantic scenes often feel more clunky and forced than they should be.  But, this time around, they're not the most major parts of the work.  Also, as unlikely it may seem, I think this film features the best performance by Zhang Ziyi -- deglammed and actually signs of her having aged, but all the more admirable for this being so -- in a long while!
Posted by YTSL at 11:59 PM

Nice list, YTSL! Haven't seen quite a few of them yet, but will be looking out for DVD releases, especially for the top 2 films. I get the feeling many of the films on the list didn't do so well at the local box office. Is that true, and if so, do you think that is a worrying sign for the HK film industry?

On the other hand, "My Voice My Life" did better than expected -- like was the case with "KJ" a few years back. So I'm hoping that there will continue to be room for lower budget films and that Hong Kong cinema won't be confined to just star-powered mainland-Hong Kong co-produced action blockbusters.

Hi again Samson (and whoever else is following this thread) --

Want to make an amendment to my earlier comments: "My Voice My Life" IS (present tense) doing better than expected. Didn't realize it until just now but it's STILL playing in at least one Hong Kong cinema. Not bad for an October release! :)

Thanks for letting us know! Pity I am not in HK, otherwise would have loved to catch it at the cinema!

You're welcome -- and another FYI: "Women Who Flirt" had (admittedly limited) runs in Australia and the US before it hit cinemas in Hong Kong!

I love reading your end of year lists. Your top 10 Hong Kong movie list has several films I'd like to see.

But gurr...rr.....I really want to see Dot 2 Dot and can only find trailers for it. Do you know if it's coming out on a DVD? Can't find a
DVD or steaming for Women Who flirt but know this will be available
sometime. The other movies I'm interested in watch I can stream.

Thanks for reading my end of year lists and am glad you enjoy doing so.

I think "Dot 2 Dot" is out on DVD here already. Hope you find a DVD of it to buy.

Re "Women Who Flirt": did you know it was out in selected cinemas in the US?

According to their official Facebook page, the DVD of Dot 2 Dot won't be released before 2016.

An update for interested parties: can confirm that a DVD of "Dot 2 Dot" has not yet been released. I think it's too bad and wonder what are the chances of it playing at film festivals abroad...