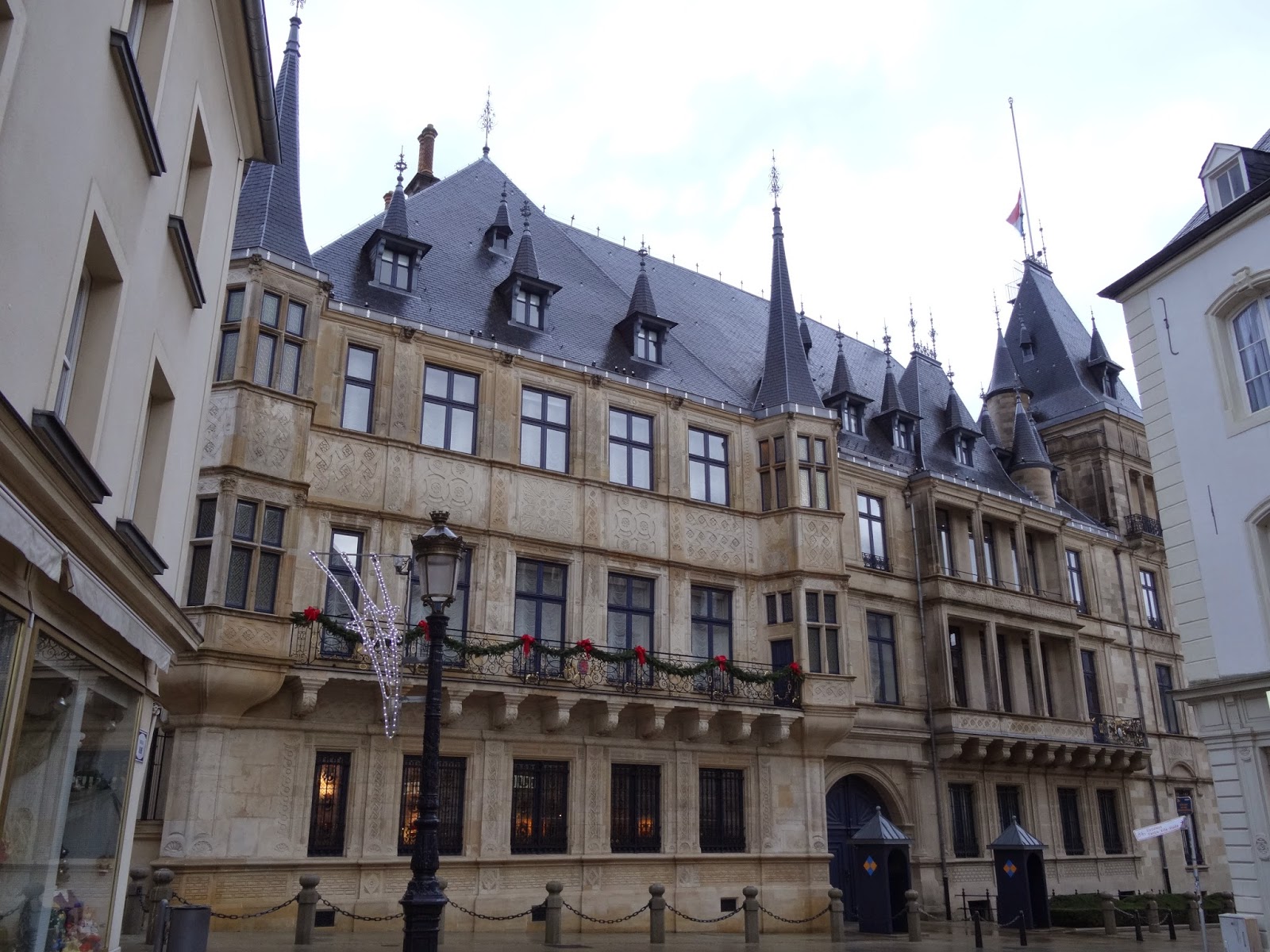 This is a really nice looking building --
but would you think it's a palace? 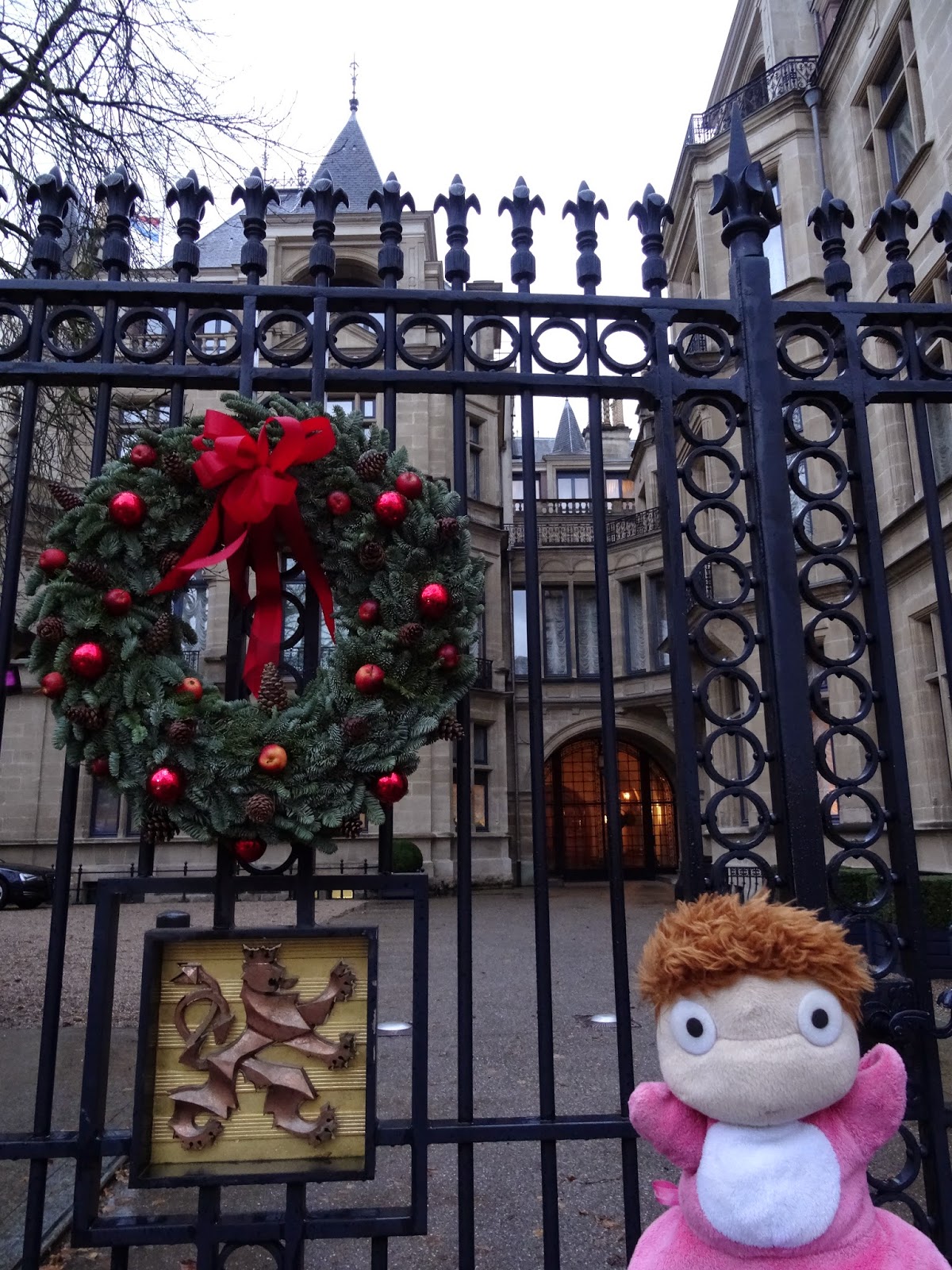 Puppet Ponyo poses in front of the gates at the back
of what is, in fact, Luxembourg's Palais Grand Ducal!

Early on during my German friend's and my visit to Luxembourg, we walked by a building in the center of the capital city that caught our eye because it had interesting decorations on its walls.  Elegant rather than outright grand to our eyes, it nevertheless turned out to be the Palais Grand Ducal (Grand Ducal Palace, aka Palace of the Grand Dukes) -- the official residence of the country's ruler.


It wasn't just the Palais Grand Ducal's relatively modest size that made me fail to immediately recognize that it's a palace, and that of a reigning head of state at that.  Rather, it that it seems so accessible -- in terms of there being no fencing at the front of it (only the back section where, one presumes, cars drive in) -- and there only being two soldiers visibly guarding the front (and just one more guarding the back).


All of this makes the official residence of Luxembourg's ruler seem a far cry not only from the likes of Buckingham Palace and the White House but also the Chief Executive of Hong Kong's official residence.  As I later was to learn, visits by the public also can be made to the Palais Grand Ducal for several weeks in the summer too!  Talk about being an accessible palace and place!!


Something else I found interesting was Luxembourg's high court building being literally adjacent to the Palais Grand Ducal -- and the country's national legislature (i.e., the Chamber of Deputies) being located just a few meters away too.  In view of this, finding out that when it was originally constructed in the 16th century, the building housed the town hall actually isn't too surprising -- and ditto re the Grand Duke actually living for more of the year in the less central Berg Castle and also having a holiday home in the south of France!

As it's often been noted, "the rich are different".  Nonetheless, the ruler of Luxembourg does seem to realize -- unlike, say, the ruler of Hong Kong (something I perhaps noticed particularly since my visit to Luxembourg took place when the Occupy phase of the Umbrella Movement still was going on)  -- that, it's actually considered a good thing to, symbolically at least, come across as being close to the populace and accessible to the people, to the point of literally opening one's home to them for at least part of the year!
Posted by YTSL at 11:30 PM

You've certainly captured the traditional architecture of Luxembourg in the words and images of your travel blogs...As for Puppet Ponyo, you've placed her in one of her best poses...Because of the way she enhances your travel photos, for me she transcends being a plushie. She's become such a recognizable online presence, that she's become somewhat of a worldly and exuberant traveler's companion.

Puppet Ponyo's companionship on my travels definitely makes her transcend ordinary plushie-ship to my mind. I hope some day, some one will see her and ask me "Is she the Puppet Ponyo featured on the Webs of Significance blog?" -- but alas, that has yet to happen, so I settle for people recognizing her for the Miyazaki creation that she is. :)