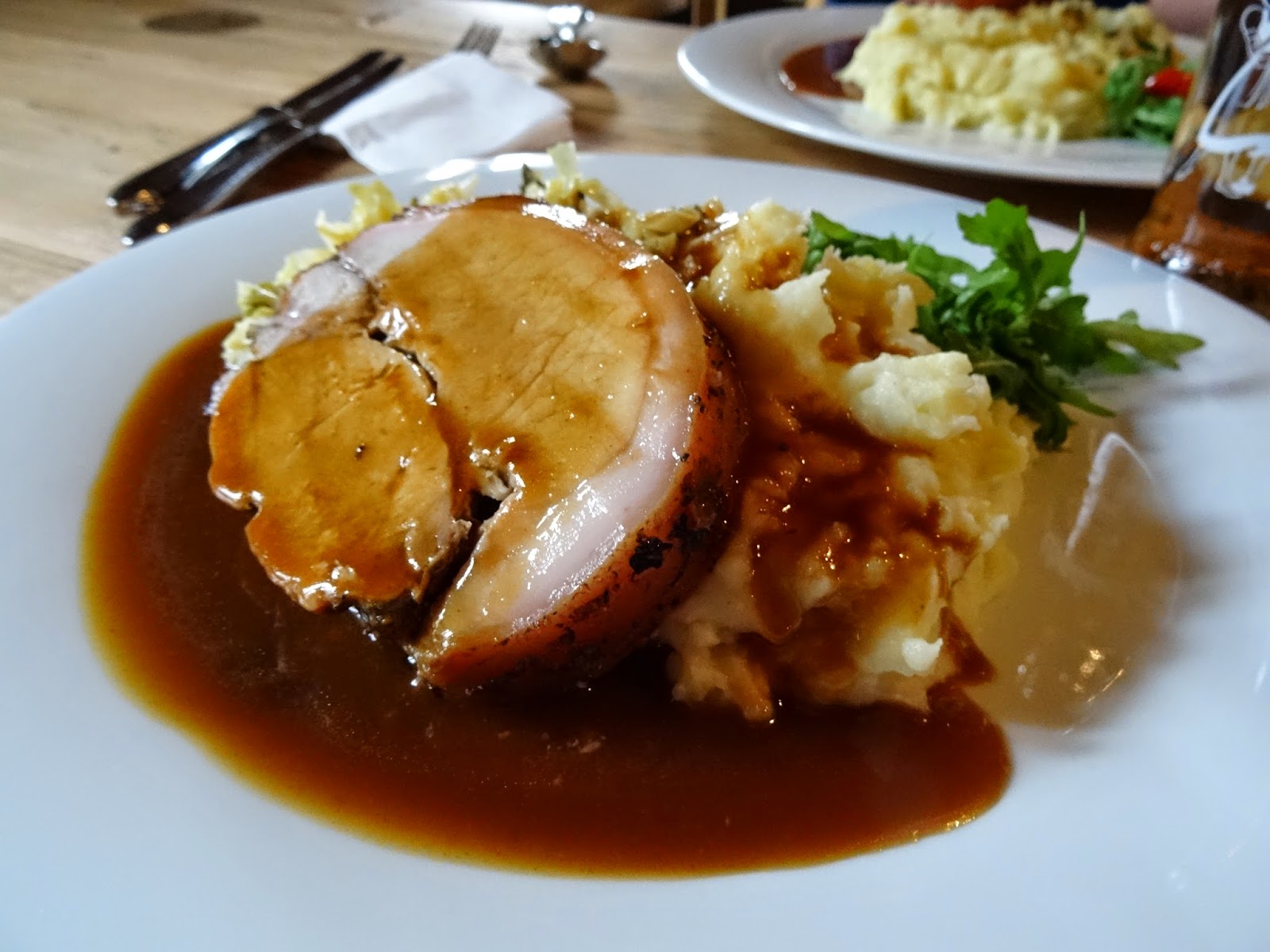 Bavarian schweinbraten is one of those dishes
that helps warm one up in the winter ;b 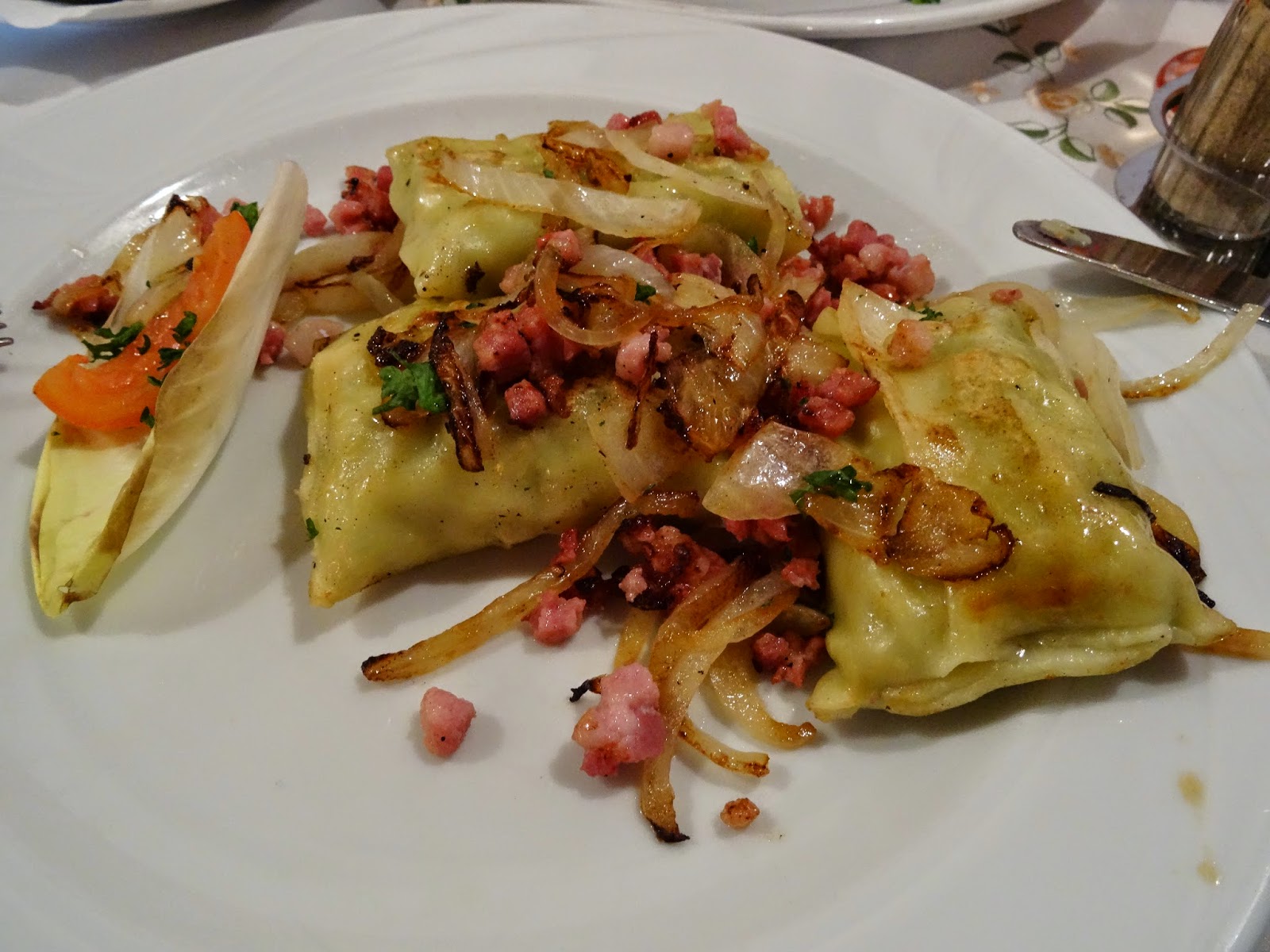 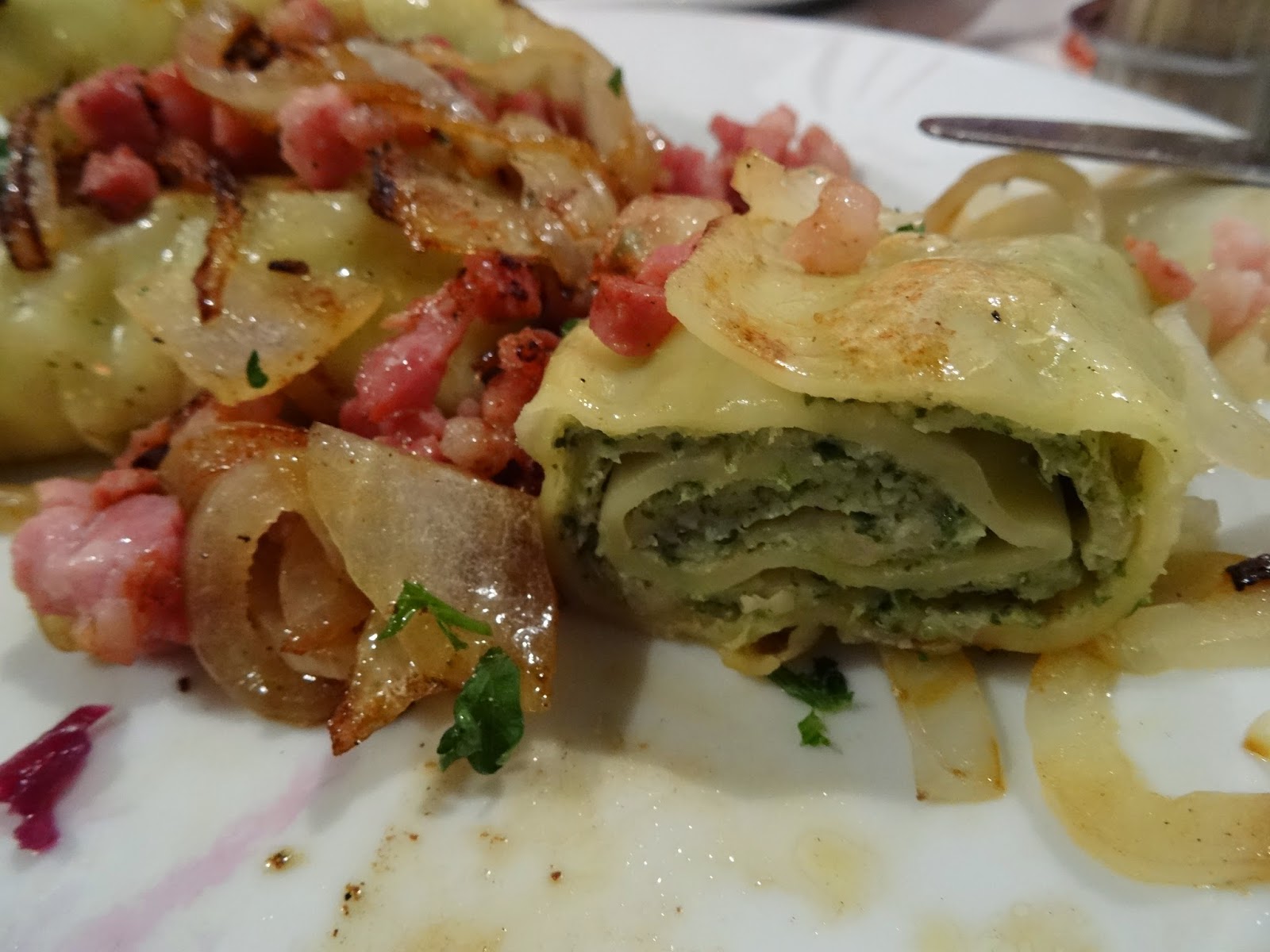 But when cut into half, their inside brings to mind lasagne to me!

Before my most recent trip to Germany, a friend of mine in Hong Kong told me to enjoy eating lots of sausages.  But as was the case on my previous trips to Germany (including in 2010, when I first visited my German friend in her home country), I actually ended up eating far more meals that didn't involve a single sausage than ones that did -- and, in fact, I ate more sausages on the flights to and from Deutschland than I did in Germany itself!


Actually, what I ate the most regularly on this past German trip was bread -- and there was many a day when I'd have bread at breakfast, lunch and dinner.  Although this may sound boring, it was not since there really are many varieties of bread to be found in Germany: for example, I tried bread made out of chestnuts for the first time on this recent vacation!


Also, I didn't just have German bread -- which actually may be my favorite bread in the whole wide world -- on this recent holiday.  Instead, on the two occasions that my German friend and I opted to have some Turkish food, there was Turkish bread -- which I first grew to love when I visited Istanbul some years back -- thrown into the mix!

The second most common thing I ate this past holiday was pig meat - be it in the form of pork, ham or bacon.  (And yes, I sometimes wonder which people love pig more -- the Chinese or the Germans!)  Among the more memorable and  delicious pig meat I had this time around were a traditional Bavarian pork loin dish -- despite not visiting Bavaria this time around! -- and a Swabian one featuring pasta that was thicker, rougher and more substantial than the Italian versions that I'm more familiar with, with a spinach filling and served with fried bacon along with onions.

While the Swabian maultasche was pretty unusual, it still was not the most exotic thing I ate on my recent German holiday.  And neither, even, was the cheese with volcanic ash in it -- the second time I've eaten such a thing (with the first time having been at the Caprice Bar in Hong Kong).  Instead, that accolade has to go to the lard that I have to say really does taste great when spread on good bread -- one of them a traditional German pig fat concoction that I had in Trier with some tasty craft beer; and another a vegetarian version that may be considered to be healthier! ;b
Posted by YTSL at 10:51 PM

HI YTSL -- Yummy looking photos! What does chestnut bread taste like? Is it ground into a powder or were there bits of chestnut in there?

I love dark rye bread... in Beijing I would get it at a hotel bakery when they were closing so all their baked goods were half off!

And isn't pork the equivalent of "pig meat"?

The chestnut bread I had was made from chestnut ground into a powder and not as sweet as I thought it'd be -- not least because it had a sprinkle of salt on it!

And pork is pig meat -- but I'm thinking so are ham and bacon. So pork's more a subset than equivalent of pig meat?

Pork means all kinds of pig meat... ham and bacon are too, but in general we don't say pig meat but pork! Like we don't say cow meat but beef!

Glad to see that you have enjoyed your meals in Germany.

I'm maybe a bit spoiled as far as bread goes since we have so many different types here.

Chestnut bread can be made with chestnut flour and it sure is more delicious when there are small particles of it in there too.

Maybe because I have a savory tooth, I never imagined a chesnut bread to be sweet but of course there is a bigger chance of it to be sweet :) Now that put a smile on my face!

The food does look yummy. Nice to know about some of the food habits in Germany.

As you know, I love Turkish bread as well as German bread. And at one of the Turkish restaurants I ate at in Germany, I was given two different kinds of breads to eat with my lamb and vegetables, etc., and really was happy about that! :)

Something else about German food habits: what I ate tended to be on the traditional side but as my German friend told me, nowadays, many Germans tend to go for lighter fare -- e.g., muesli instead of bread, meat and cheese for breakfast, and lots more salads rather than meat and potatoes for lunch or dinner! ;b

Oooo... you holidayed in Germany. Look at the yummy food you post... *drooling*

Yup, was there for a few days last month -- and Luxembourg too! ;)