The Umbrella Movement on the streets of Hong Kong once more! 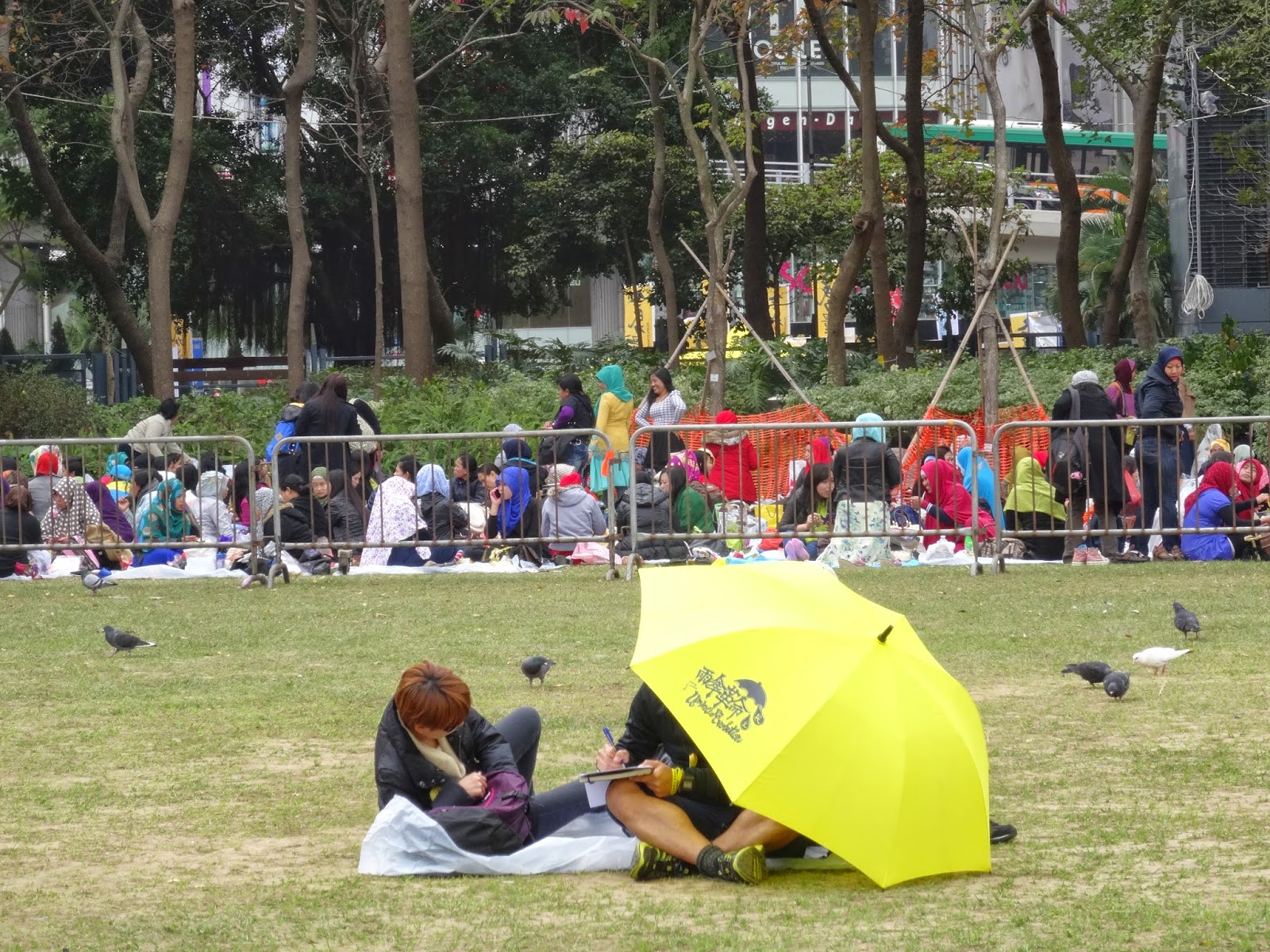 The turnout could have been better... 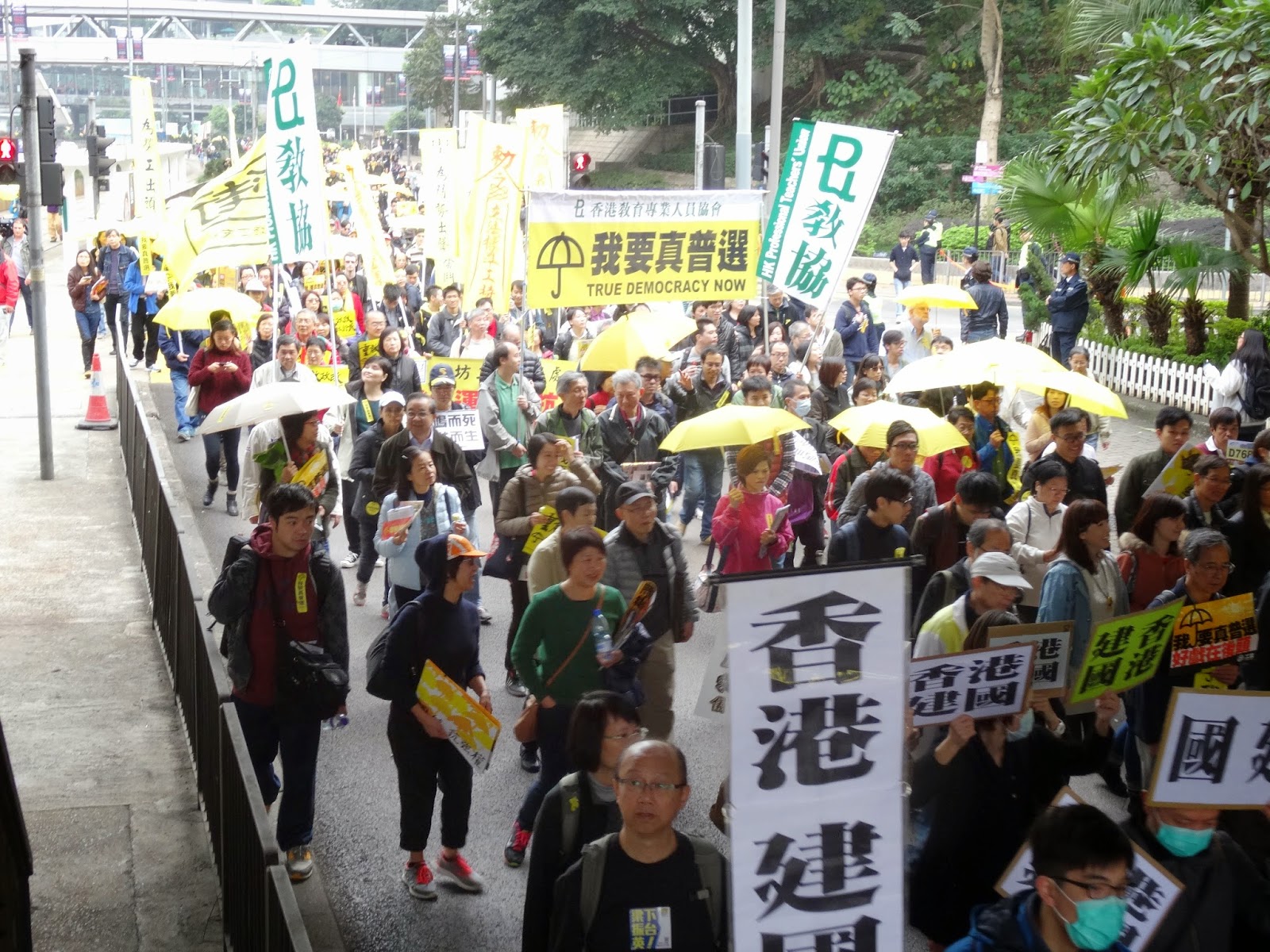 ...but there still was no mistaking the message being sent 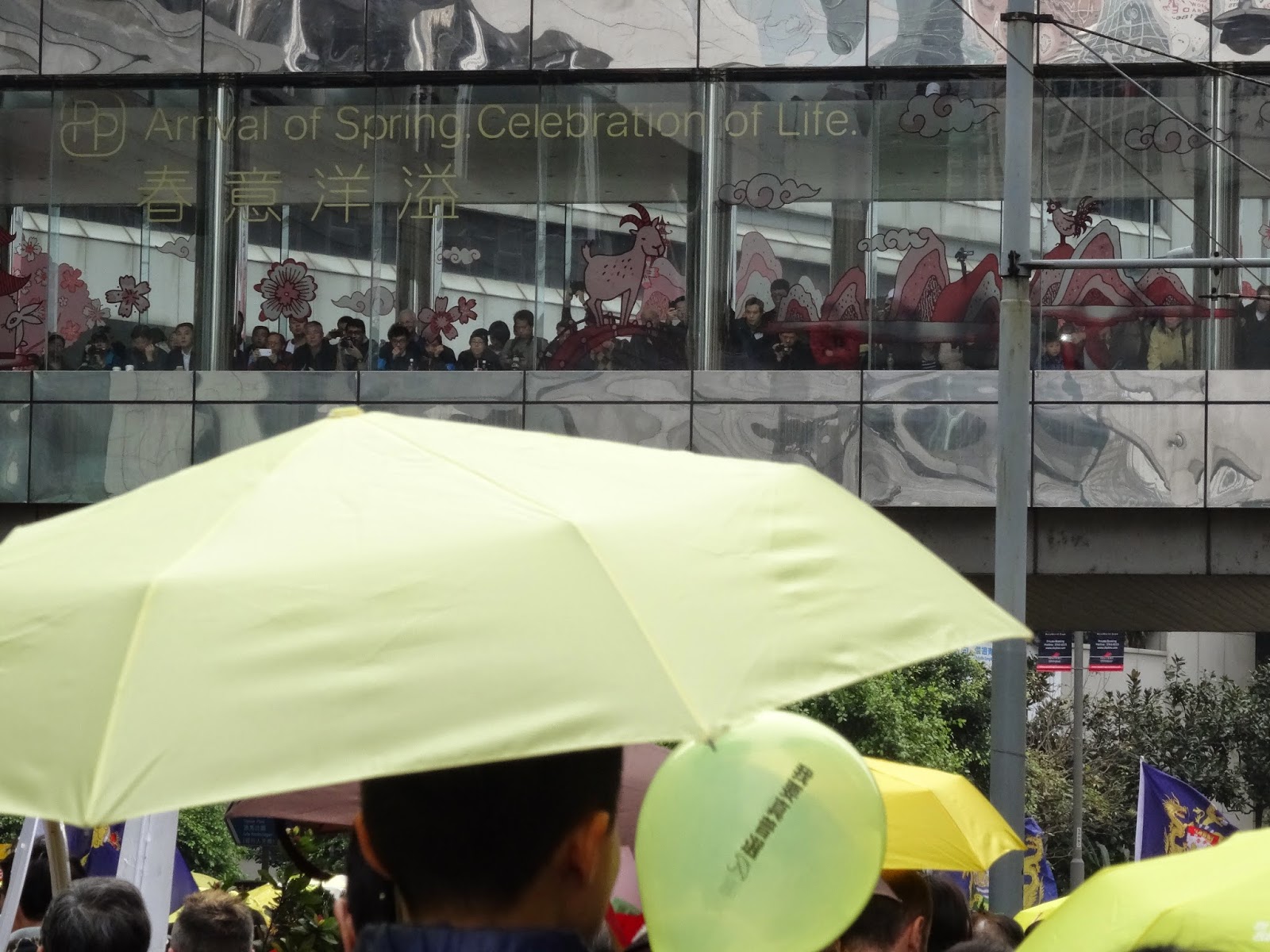 Spring is just around the corner and
the Umbrella Movement still is alive! 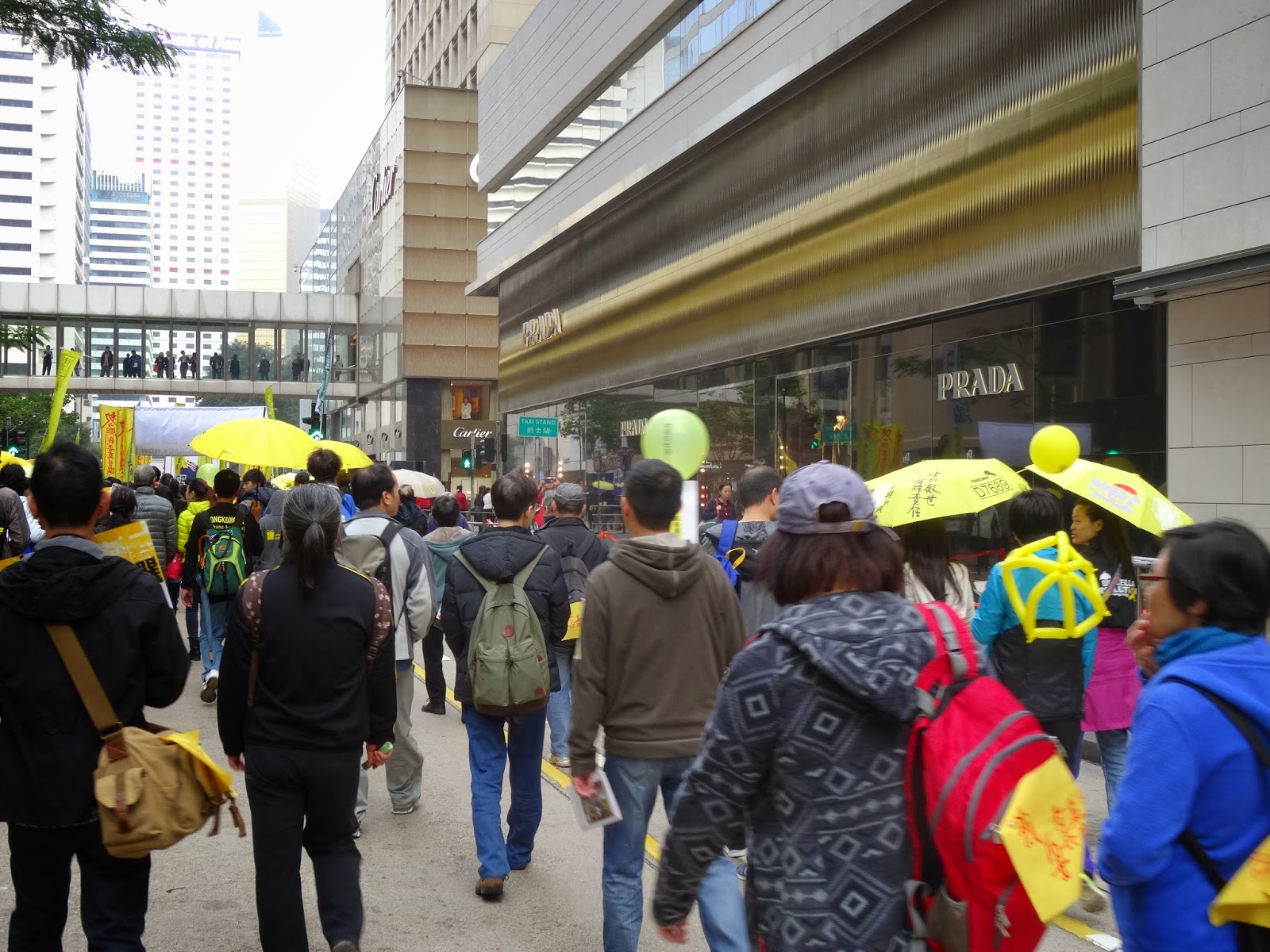 With few blockages, it took just a little more than two hours
to get from Victoria Park to Central on foot this afternoon

Thousands took to the streets today to march for genuine universal suffrage for Hong Kong.  The organizers had hoped for 50,000 participants but when I got to the starting point in Victoria Park at 1.30pm this afternoon, I got to wondering whether there'd even be 5,000 people attending the rally and taking part in the subsequent pro-democracy march.


Unlike at previous protests (including that taking place on July 1st last year, which I can easily believe attracted some 500,000 participants), no one I knew had told me they would be going. One friend had to work today, another had to take her children to swimming lessons, yet another came down sick yesterday and still others sounded like they didn't care any more or were giving up protesting against the government and/or adding their voice to the pro-democracy movement in this manner.


But on the green at Victoria Park (where we were asked to assemble, despite the football pitches being empty) and throughout the march's course all the way into the heart of Central, I felt like I was with friendly kindred souls and felt my spirit rise -- and my love for Hong Kong be rekindled -- anew.

Although anti-689 slogans (in particular D689 and D7689) were very popular at today's event,  the mood actually felt positive and good humored rather than downbeat and angry for the most part.  And the generous giving encountered during the Occupy phase of the Umbrella Movement was back: with people not only handing out such as signs, stickers and such stating "I want genuine universal suffrage" and the like but also bottles of water and, amusingly, sticks of corn of the cob for sustenance!

As for the police: yes, they were out in force -- and some had on faces that looked on the thunderous side.  But I was heartened to see that after one marcher fell and appeared to twist her ankle, two policemen rushed to help her along with other protesters.  Also, in contrast to July 1st 2014, 2013 and 2012), enough sections of the roads were open to make the march much less filled with delays and consequently more pleasant -- with the sections where the tram runs being open for protesters right from when we left Victoria Park near the Tin Hau exit.


Some might say that those cops felt they could be nice since the numbers of participants were on the small and unthreatening side.  But even while the pro-democracy marcher numbers may not have been all that high, there still were a good deal more of us out there in the area today than the police.


More than incidentally, I didn't notice a single counter-protester out there -- and found it interesting as well that a few people in the cars we marched past along the way would do such as give us the "thumbs up" sign and a large number of others (on the street, in buses, etc.) felt a need to take photos of the march.  In addition, I spotted folks who held up yellow umbrellas and pro-democracy signs along the way -- the majority of them elderly and probably not feeling physically able to march all the way from Tin Hau to Central.
Thus it was that despite there being fewer people out on the streets this afternoon than many of us would have liked, I still came away feeling pretty good.  If nothing else, I did my civic duty, saw other people doing the same -- and we all went about doing so peacefully and in a manner that tells the world that Hong Kongers (defined in the Oxford English Dictionary as "a native or inhabitant of Hong Kong", as was noted on several protesters' t-shirts and sweatshirts) surely have the requisite socio-political maturity to be given the right to choose the government that we feel we deserve.
Posted by YTSL at 8:51 PM

Hi YTSL! Thanks for the report! Sounds like it was a good atmosphere!

You're welcome and yep re the good atmosphere. And I hope it'll be the same atmosphere-wise come this July 1st!

When I went to The Guardian site this morning and read about the return of the Umbrella Movement I wondered if you were there. Hooray, you were there and thanks for your photos and comments.

I think the low turnout says that many people don't care to participate in a government-sanctioned protest after having experienced the power of civil disobedience.

I'm surprised that the rally got as much coverage from the international press as it did since it was on the small side -- but I'm glad.

I think you're right to some extent. There also are people who're scared of repercussions from the governments of Hong Kong and mainland China if they're seen to support the Umbrella Movement -- now, more than ever, alas.

Gratifying to read this photo-essay about a core group of faithful Hong Kongers who made it their business to participate in this walk to keep the spirit of the Movement alive.

Re the Hello Kitty Go Green Organic Farm: it's one of those places to go to that I've got on my list in lieu of a hike... ;)