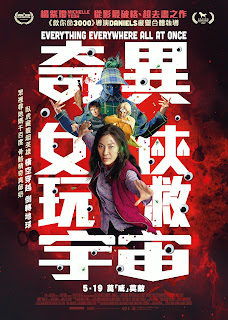 Hong Kong poster for Everything Everywhere All At Once
Everything Everywhere All At Once (U.S.A., 2022)
- Daniels (i.e., Daniel Kwan and Daniel Scheinert), directors, scriptwriters and producers
- Starring: Michelle Yeoh, Ke Huy Quan, Stephanie Hsu, James Hong, Jamie Lee Curtis
Several months ago, I viewed the trailer for an American independent movie that I thought looked pretty insane.  Since then, I've tried very hard not to read too much or view any interviews with the stars and/or directors of Everything Everywhere All At Once because, very early on, word got out that this was a "must see" movie best seen "cold".  And after viewing this film, I would heartily concur  that this absolutely outstanding as well as thoroughly unusual cinematic offering from the outstanding directing (and scriptwriting) duo collectively billed as Daniels is best viewed without knowing much about what its plot entails.
Consequently, this review will reveal very little about the movie's plot.  At the same time, I want to write about this super entertaining film because, among other things, I want to share how much it left me gobsmacked, in a good way, and that, more than 48 hours after viewing Everything Everywhere All At Once, my brain is still trying to process what I saw, heard and experienced over the course of the 140 minute length effort!
Put another way: it's been eons since my mind was this blown away by a movie's creativity and originality.  Ditto re it having been a long time since I viewed a film and felt like I really didn't know where its story was going and how it would end right up until its final minute or so.  Ditto re it having been ages since I viewed a movie that so very seamlessly switched genres (in this case: action; sci-fi; comedy; drama; romance) and from one multiverse to another and yet others (yes, this is a film that involves characters occupying multiple -- and often incredibly different -- multiverses).
At the right, left and center of this film which also touched my heart and had me shedding tears on more than one occasion is Evelyn Wang, the multilingual (English, Mandarin and Cantonese) American immigrant character brilliantly portrayed by Michelle Yeoh.  Just a few months ago, I was telling a friend that I was growing tired of watching the Malaysian actress I first saw as an action star playing dignified doyens and elegant establishment figures like the women she essayed in Crazy Rich Asians (2018) and The Lady (2011) and as far back as The Soong Sisters (1997).  And while we do get glimpses of that in this movie, one of the joys of  Everything Everywhere All At Once is that its lead actress is called upon to do so much more, and shows that she is well able to do so.
Although he doesn't get as much screentime in this movie as Yeoh, lead actor Ke Huy Quan also has plenty of opportunities to showcase his talents.  And so good (too) is he in his role as Waymond Wang, Evelyn's better half in certain key ways, that it really is a shock to learn that that this actor, whose first two film appearances were in Indiana Jones and The Temple of Doom (1984) and The Goonies (1985), had not had a starring role in a movie for decades prior to appearing in Everything Everywhere All At Once (and, in fact, only returned to acting after being inspired to do so by seeing the success of Crazy Rich Asians).
Not that Ke Huy Quan had not been entirely out of show business in that time.  Rather, he had ended up working more behind the camera, including as assistant director to Wong Kar Wai on 2046 (2004).  Speaking of which: Everything Everywhere All At Once has a scene whose aesthetics appear to have been inspired by Wong Kar Wai.  And, in general, I can't help but be convinced that at least one of the Daniels, if not both of them, are major Hong Kong movie fans; because I can see the influence of not only Wong Kar Wai but also wacky mo lei tau comedies along with the multi-/trans-genre, "everything but the kitchen sink" and "let's go on an emotional rollercoaster ride" tendencies of classic 1980s and 1990s Hong Kong cinema in this made-in-America movie.
Two other elements of Everything Everywhere All At Once that remind me of the movies that rekindled my love for Hong Kong cinema back in the 1990s are that the film very much benefits from having: a great ensemble cast (with relative newcomer Stephanie Hsu admirably holding her own against, and along, the likes of Yeoh, Quan, veteran actor James Hong and Hollywood royalty in the form of Jamie Lee Curtis); and incredible editing (courtesy of Paul Rogers).  I know it's early days still but I will be shocked when come awards season next year, many members of this remarkable film's crew and cast don't cop nominations, and maybe even wins, too!  At the very least, it sure did capture my heart as well as mind; not least by possessing so much soul as well as offering up so much incredible invention and imagination.
My rating for this film: 9.5
Posted by YTSL at 11:59 PM

Saw a clip in Youtube of James Hong on Jimmy Kimmel Live!. Amazing elder still has its wits intact at 93. On the other hand, he recently got his star on Hollywood Boulevard after getting into the business for 70 years.

Amazing to think that James Hong is 93. He physically seems much younger! Have you seen the cool video of Jamie Lee Curtis lauding James Hong at his Walk of Fame ceremony? If not, here it is:
https://www.youtube.com/watch?v=_-XVBofqAv4

It left Bkk after one lousy week! I was so pissed. Sounds great. I will catch it one day. On Letterbox it is about the highest rated film ever and then I saw someone rate it 1.5 - I felt like smacking him and I haven't even seen the film.

Dang, you left it too late to view it on a big screen!

Speaking of people who didn't care for it: someone I know on Facebook gave it a 1/10. I can't take it seriously though as that fellow regularly gives films that appalling low rating!

I have not seen the ceremony before you posted the link. Thanks. Seems they are giving Hong a star close to the Metro Station at North Orange Drive. That's a very busy district indeed.

Ugh, while looking up the location I found there is an In-and-Out Burger in the neighbourhood. Must be sort of new as the burger joint wasn't there 21 years ago.

Wow, you're very familiar with that area! Re an In-and-Out Burger in the neighborhood: well, if there are Five Guys in various parts of Hong Kong... ;S

The 'N. Orange Drive' street sign is clearly visible in the photo of Hong with Kim & Curtis. That was just a bit more of referring to Google Map. The location is actually right in front of the MADAME TUSSAUDS. You can see the 'Box Office' sign in the back in your Youtube Link.

When I left LA back in February 2001, the Metro Station with the Mall on top of it was still under construction. I only got some update of that mall\metro station by watching movies like 'The Italian Job (2003)'. I left just right as if I stayed longer, I might be stuck there owing to 9/11.

I did ride by bicycle quite a few times along Hollywood Boulevard during my stay, however. I was fortunate enough never had to face any of those road rage incidents.

I didn't pay much attention to the location in the video because I'm not familiar with the geography of Los Angeles! Have only ever visited that city rather than lived there -- and even when I've visited, I've not spent much time in its central parts!

During my two year's stay in Los Angeles, my colleagues always teased me for living in downtown as they see Downtown LA a no man's land. They all drive to work and live at least twenty miles away. Some close to eighty miles away.

As LA's public transport generally sucks, thus I bought a bicycle for weekend commute around closer city districts. I ride to Burbank, Santa Monica, Hollywood, Glendale, Pasadena, San Gabriel through service roads. Some of the metrol bus lines has bicycle rack thus I could always hop on a bus back to downtown when it is getting dark, not suitable for cycling.

That's good exercise too. Over the months I have only fallen off on the sidewalk flat on my back once. :-P Car drivers are usually polite on service roads thus that wasn't any problem during my stay. On many occasions there were actually very few cars on the service roads.

Something to remember that the Cha Chan Tang around Chinatown\San Gabriel over there offer unlimited refills back then. Iced drinks like all sorts of tea usualy has unlimited refill. Some come in 750 ml cups or even 1 Litre cups.

It sounds like you have good memories of your time in L.A.! My last few years in the US, I'd spend the Christmas period with friends who lived in the greater L.A. area. BTW, one of them is the woman behind the Michelle Yeoh Web Theater. Check out its "Everything Everywhere All At Once" page!

Yes, I had fond memories of my stay in Los Angeles. I have also visited San Francisco twice, once by coast starlight train (an eleven hour trip of one direction). First hand experience of backward train service in the States. But that was actually not a bad experience. US may be a leader in many aspect, but public transport is still sort of weak.

ps I walked by the Bahce Turkish Restaurant in Silvermine Bay yesterday and found it closed. The sinage had already disappeared. Seems one less good restaurant in the area.

Yes, public transportation in the US is surprisingly bad for a developed country; and more so on the west coast than east coast. Re AMTRAK: Since I'm a fan of trains in general, I took it a number of times, with the longest journey I went on it being from Denver to Los Angeles! Passed through some amazing scenery along the way but, ya, don't think I'll be repeating that experience again! :D

Oh, too bad re Bahce. A number of places I used to eat/drink at have indeed gone out of business in recent years. Among them, that which once was my favorite bar in Hong Kong: Sake Bar Ginn. Though, to be honest, I hadn't visited for about a year before it closed. (Bar-going is something I've done far less of in pandemic times!)