Hong Kongers who have gone into exile, and one who has opted to stay against the odds 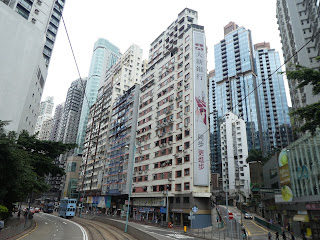 Which road to take?  Is one better than the other?
Democratic Party vice-chairman Lee Wing-tat has left Hong Kong -- joining an ever-growing list of former pro-democratic camp legislative councillors who have gone into exile  It's not just Nathan Law (currently based in Britain) and Ted Hui (in Australia) but also the likes of former legal sector representative Dennis Kwok (in Canada) and "Oathgate"'s Baggio Leung (in the U.S.A.).  When you consider that the likes of Glacier Kwong and Ray Wong also out of Hong Kong, there really is quite a sizeable contingent of (former) politicians and (still active) activists out there now, many of whom are continuing to make their voices heard and seeking to tell the world about Hong Kong's plight.
I'm not sure how much difference it can make for Hong Kong but one can't say that their voices are being completely ignored.  Just this week, we've seen: American president Joe Biden blocking the removal of Hong Kong residents from the U.S.A. for 18 months, citing Chinese repression; Canada officially issuing a warning to its citizens that the authorities in Hong Kong can prevent people leaving the city under a new law that has raised fears of Mainland China-style exit bans; and a Washington Post editorial warning of 'white terror' sweeping through Hong Kong and pointing out that President Biden has talked of a global contest intensifying between democracy and dictatorship, "and right now the despots are taking over Hong Kong."
That Washington Post editorial about Hong Kong also referenced Steve Vines and Kacey Wong having decided to leave Hong Kong.  Meanwhile, the veteran journalist has also a piece out today in the Hong Kong Free Press about why he decided the time finally came to leave his home of 35 years old, a few choice excerpts of which I quote here:

Killing the spirit of Hong Kong was never going to be easy but the Chinese Communist Party has set about this task with a vigour and determination that is quite breathtaking...

There is a real fear of the knock on the door in the early hours of the morning by National Security police. The almost daily arrests confirm that this is so. The idea that the rule of law has not been undermined is hard to sustain following the introduction of a slew of new legislation clearly signalling that Hong Kong citizens can no longer look to the law to protect them from injustice. I could go on, but the litany of body blows to liberty is sufficiently well known..

...loving Hong Kong has become a suspect activity. The Quislings now running Hong Kong and their mini-me supporters revel in their disdain for everything that makes this place distinctive. Most of all they hate the people, the millions who poured onto the streets calling for democracy and even those who chose to stay at home but cherished all the things that made Hong Kong so distinctive. They even hate the Cantonese language and the free-wheeling culture.

At the same time, as Vines also noted in his piece: "Yet other people – including those considerably more exposed than I have been – have opted not to leave. Some have no choice, while others could go yet have decided to stay."  Among these are filmmaker Kiwi Chow, whose protest documentary, Revolution of Our Times, recently had its world premiere at Cannes.

As it so happens, there's an interview with Kiwi Chow in the Hong Kong Free Press today too.  Some excerpts from that piece:

His film was [an] outlet for the emotions Hongkongers could not express. Many now fear that discussing the pro-democracy movement publicly or showing support for the protests may breach the sweeping security law.

“The year of 2019 was traumatising. But when people cannot even talk about this distress, it is like being traumatised for the second time,” Chow said...

Hong Kong has seen an exodus of families since the national security law was implemented last year. While Chow’s anxious friends urged him to quit the city in pursuit of a safer future with his family, he is adamant that he will stay.

Chow said there was no need for him to leave, as he wanted to “follow Jesus Christ” and “bear witness” to what happens in his home city.

(For those who didn't realize: Hong Kong is home to a not insubstantial number of Christians.  For the record: Carrie Lam is a practicing Catholic; as is Hong Kong's second Chief Executive (and now also ex-jailbird), Donald Tsang.  And on the other side of the political equation: there's Cardinal Zen, Martin Lee, Reverend Chu Yiu-ming and Joshua Wong, among others.)

It seems to me when someone wants or needs to leave their current resident is usually the wealthy. And poor can't leave.
Coffee is on and stay safe

You're right re Hong Kong. It's far harder for poor people to leave than richer folks.