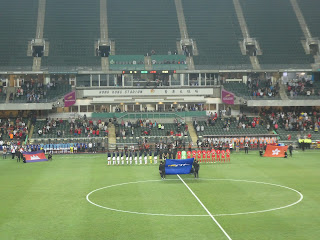 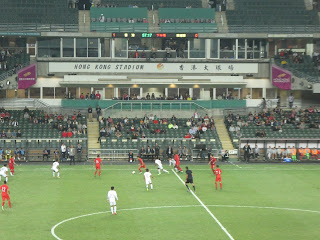 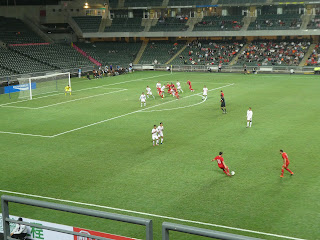 They managed to score a goal too in the second half! :)


Before anything else: here's confirming that, contrary to my truly pessimistic expectations, the police siege of Hong Kong Polytechnic University (PolyU) is still ongoing.  This is not to say though that the news coming out of there has been all that great.  To the contrary, in fact, as reports, video footage and images galore have attested to terrible things having occured in the past 72 hours or so in the area, including the police reneging on their promises to let people leave unharmed by firing tear gas and rubber bullets as well as effecting arrests in a thoroughly brutal fashion.


So it might seem callous of me to have gone and attended the football match at Hong Kong Stadium this evening between Hong Kong and Cambodia -- except that this World Cup Qualifier was listed on the Hong Kong protest schedule and was arguably one of a number of events these past few days that many people took part in with the hope of causing at least some riot police to be diverted to them, and away from the besieged university.


Yesterday (and especially last night), thousands of people went to central Kowloon to try to create diversions for and also to rescue people trapped at PolyU.  At lunchtime today as well as yesterday, office workers and others protested in Central -- but while it's true enough that protesters were quickly forced off a street they had occupied onto neighboring sidewalks today, their actions resulted in a good number of riot police spending some time in Central rather than, as might have been the case, on the other side of Victoria Harbour.

Returning to the subject of tonight's football match: here's confirming that I did indeed encounter riot police on duty on the way to and into its venue.  Also, here's confirmation of there being lots of pro-democracy supporters as well as football fans in the crowd came by way of the booing of the Chinese national anthem (which, officially, also is Hong Kong's but really isn't accepted as being so) when it was played before kick off,  the belting out of Glory to Hong Kong more than once this evening, and protest chants reverberating through the stadium along with more football match specific ones.  And even with the latter, shouts of "We are Hong Kong" and "Fight for Hong Kong" are impossible to think of as being non-political in current circumstances.

At the same time though, I have to admit to having genuinely enjoyed watching the football and being at the game; this not least since Hong Kong ended up notching its first World Cup Qualifying Match victory in five attempts by scoring two goals while not letting in any from Cambodia.  A week after I had broken down and wept upon learning what was happening at the Chinese University of Hong Kong and a day after I had gotten so upset about what was happening at PolyU that -- strange but true -- I actually felt the top of my head heat up, it was nice to be able to cheer on Hong Kong, and see at least its football team triumph after having endured a number of losses over the past few months.
Posted by YTSL at 11:59 PM

Thanks for sharing!
I must admit I went to Hong Kong Stadium, feeling "guilty" not to be near PolyU. Let's move on & ka yau!

Thanks for reading and commenting. The siege at PolyU is not yet over; so it still does occupy my mind quite a bit. At the same time though, I must admit to also looking beyond and ahead, including to this Sunday's District Council elections. I hope protesters turn out in force to vote, and that the results will be ones we'll find favorable.