Pro-democracy figures penalized for standing with, by and up for their fellow Hong Kongers :( 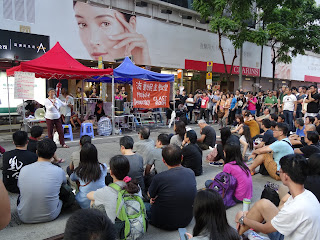 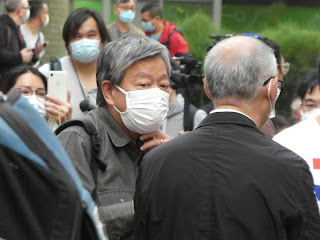 Lee Cheuk-yan outside the same courthouse in March
where he, alas, was sentenced to prison today

Yesterday was one of those bizarro days in Hong Kong when things one couldn't imagine not so long ago now occur and seem passable as normal in this part of the world. I'm talking about such as four social distanced protestors being surrounded byabout 50 cops ready to pounce on them if they are seen as going out of line (miraculously they weren't adjudged to) and Hong Kong observing its first ever National Security Education Day with schools doing such as erecting bastardized versions of Lennon Walls, students appearing to re-enact the police attack on civilians inside Prince Edward MTR station on August 31st, 2019 and the police performing the "goose step" march that the world tends to associates with Nazis and North Koreans, not just the People's Liberation Army.

In contrast, what's happened today just feels sad.  I refer, of course, to the sentencing this afternoon of nine veteran pro-democracy figures to jail terms of up to 18 months for having organized and/or participated in an unauthorized -- but, please note, massive and massively peaceful -- protest march that took place back on August 18th, 2019. For the record, the following are the individuals concerned and the sentences they received (in order of the length of their sentences):-
"Long Hair" Leung Kwok-hung -- 18 months
Jimmy Lai -- 12 months
Lee Cheuk-yan -- 12 months
Margaret Ng -- 12 months (suspended for 24 months)
Albert Ho -- 12 months (suspended for 24 months)
Martin Lee -- 11 months (suspended for 24 months)
Au Nok-hin -- 10 months
Cyd Ho -- 8 months
Leung Yiu-chung -- 8 months (suspended for 12 months)
As history professor Jeppe Mulich was moved to observe, what this amounts to are "1 year+ sentences for organizing a peaceful rally that saw the participation of some 20 per cent of the city's population. It seems the judge ranks traffic disruptions above concerns over democracy and civil rights."  Almost needless to say, this level of punishment for a non-violent protest is unprecedented.  As mentioned in conversation just yesterday with a man whose father had been found guilty of such a charge years ago, previously, this kind of "offence" (which, supposedly, is guaranteed under Article 27 of the Basic Law) would, if prosecuted at all, just result in fines at worst.
All in all, it's pretty clear to just about anyone who's been following this trial that not only has the justice system in Hong Kong changed beyond recognition but that the authorities have used it to retaliate against Hong Kong's protest movement and attempt to silence its pro-democracy political oppposition.  At the very least, this trial has always been about far more than just what took place on that super rainy day back in August, 2019.
After discharging her lawyer, Margaret Ng presented her own mitigation.  Her speech has been hailed s being one for the ages in many quarters and you should be able to understand why when you read it (made available in full here).  Actually, I submit that this is easy to see from just the following excerpts from it alone:-

There is no right so precious to the people of Hong Kong as the freedom of expression and the freedom of peaceful assembly. Not only is the freedom to speak the truth the core of human dignity, it is also the last safety valve in a democratic society, as remarked by our illustrious judges repeatedly. Respecting those rights is also part and parcel of defending the rule of law.

I had learned that the rule of law not only has to be defended in court, or in Legco, but also in the streets and in the community... When the people, in the last resort, had to give collective expression to their anguish and urge the government to respond, protected only by their expectation that the government will respect their rights, I must be prepared to stand with them, stand by them and stand up for them. Otherwise, all my pledges and promises would be just empty words...

Your  honour, I came late to the law. I have grown old in the service of the rule of law. I understand Sir Thomas More is the patron saint of the legal profession. He was tried for treason because he would not bend the law to the King’s will. His famous last words were well authenticated. I beg to slightly adapt and adopt them: I stand the law’s good servant but the people’s first. For the law must serve the people, not the people the law.

After learning of Margaret Ng's speech, fellow Hong Kong lawyer Kevin Yam was moved to vouchsafe the following: "We do not deserve people like this sacrificing for us. They are too good for us."  And after she walked out today with "just" a suspended sentence, the tearful crowd of people waiting outside the courtroom hugged and cheered her.
Sadly, this was not the end of it though.  Jimmy Lai was actually a defendant in four different court cases today.  In the sentencing for another case of participating in an unauthorized assembly for which he also was found guilty (along with Lee Cheuk-yan again, and Yeung Sum), he was further sentenced to eight months in prison, as was Yeung Sum, while Lee Cheuk-yan was handed out a six month sentence -- by the same judge, Amanda Woodcock, who had presided over the other case.  And if this wasn't already bad enough, he was additionally hit today with two additional charges, including one under the national security law.
All in all, it seems that the campaign to keep Martin Lee out of jail (which could be seen in many news publications around the world pleading his case before today, like this one and this other one) has succeeded.  However, the authorities appear intent on making sure that the likes of Jimmy Lai, Joshua Wong and "Long Hair" Leung Kwok-hung will be behind bars for a long time and I worry for all three of them: Jimmy Lai principally because he is no spring chicken (at the age of 73 years); Joshua Wong because he still is only 24 years young, and really should have a far better future to look forward to; and "Long Hair" because it often seems like he doesn't have the international profile of the other two -- and I still do think that international support does count for something in Hong Kongers' fight to be free.
Posted by YTSL at 11:51 PM

I'm suprise in my local community some of local miltia group isn't group stepping.
Coffee is on and stay safe

Seems like they have some sense left to realize how ridiculous/stupid/awful goose stepping looks. You take care and stay safe too.