And so it goes here in Hong Kong... 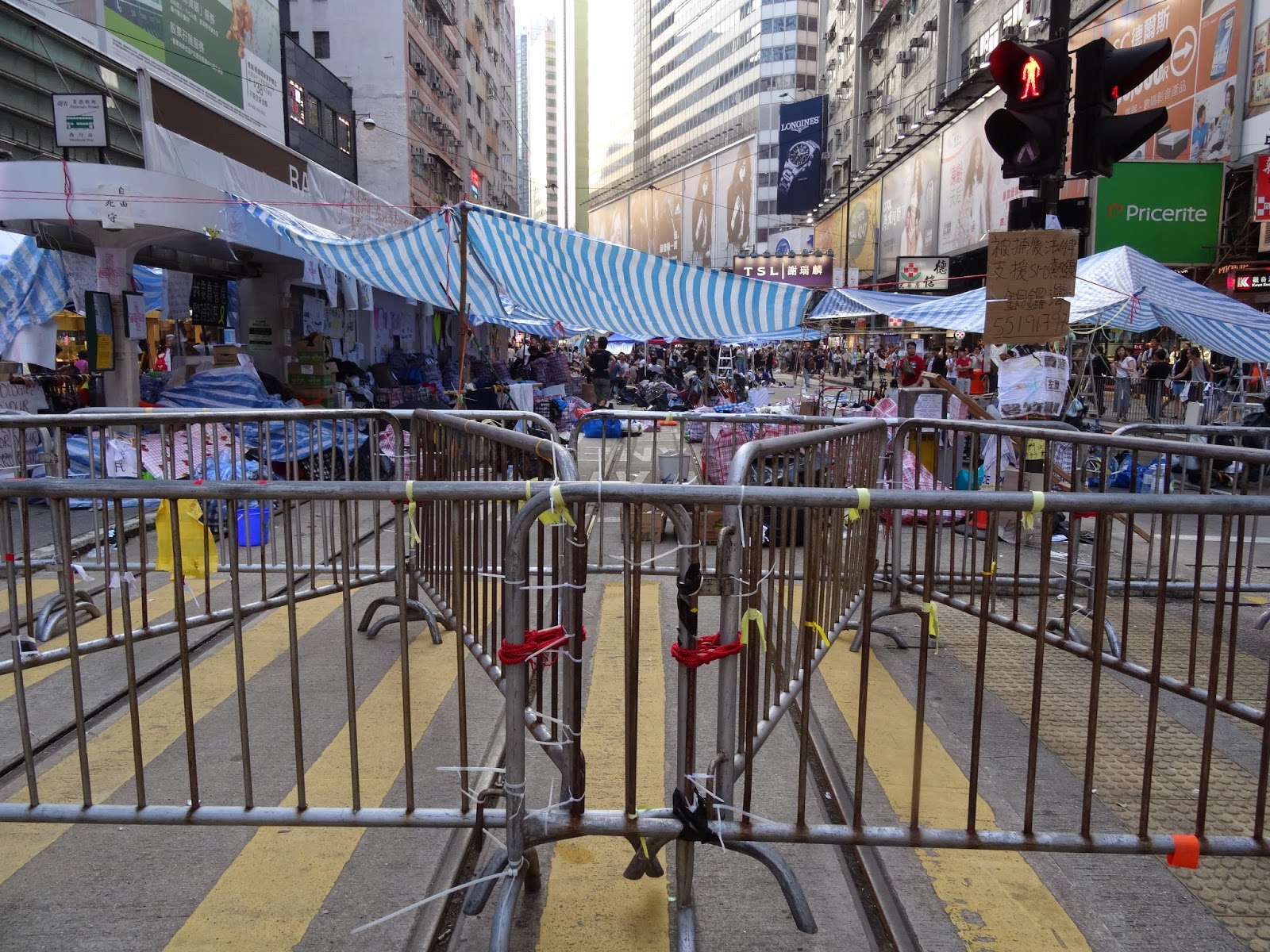 At Causeway Bay today, it looked like protesters had packed
and were ready to move out/elsewhere if needed 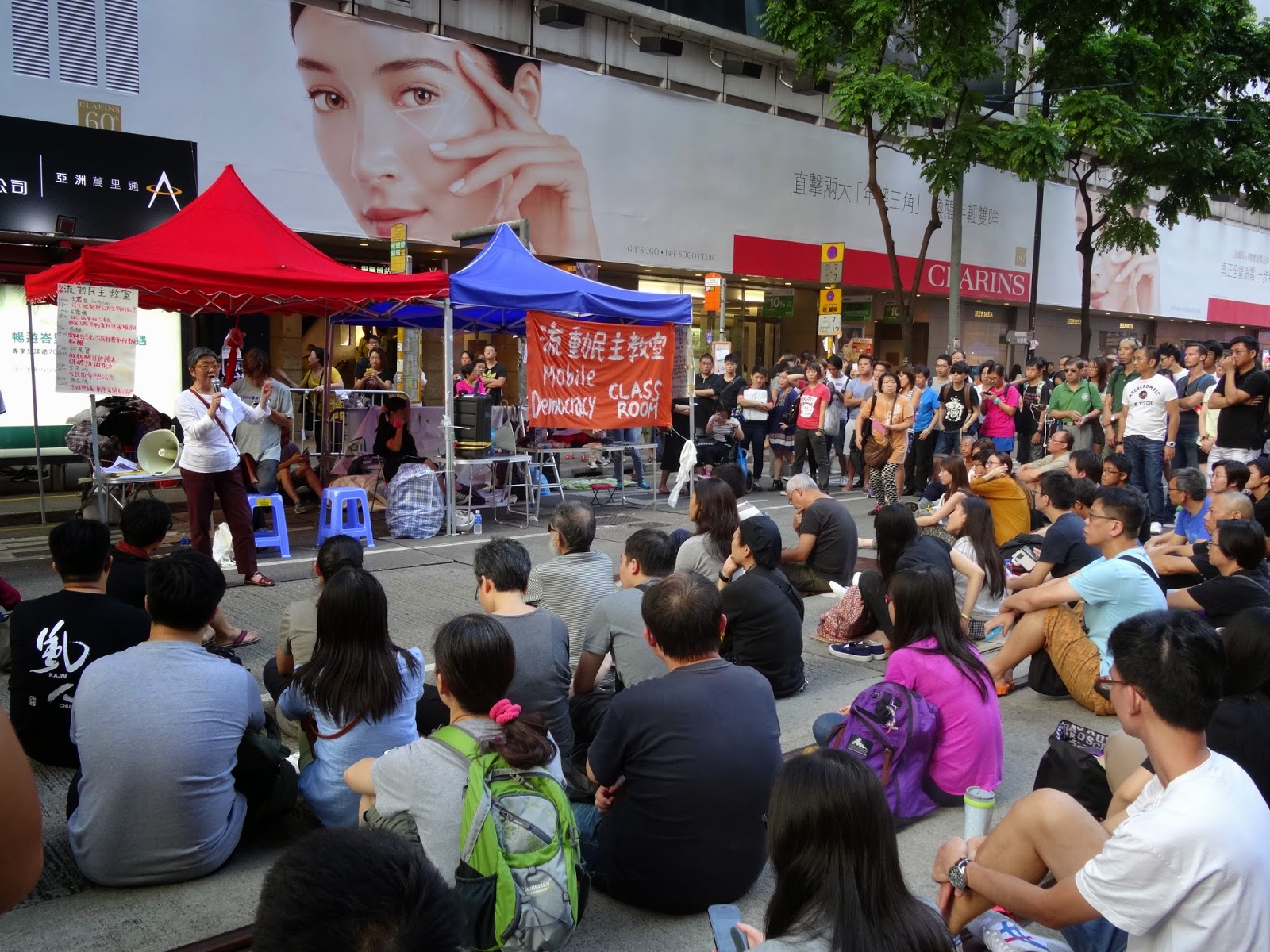 At the same time though, there still remained opportunities
to talk, teach and learn at the site 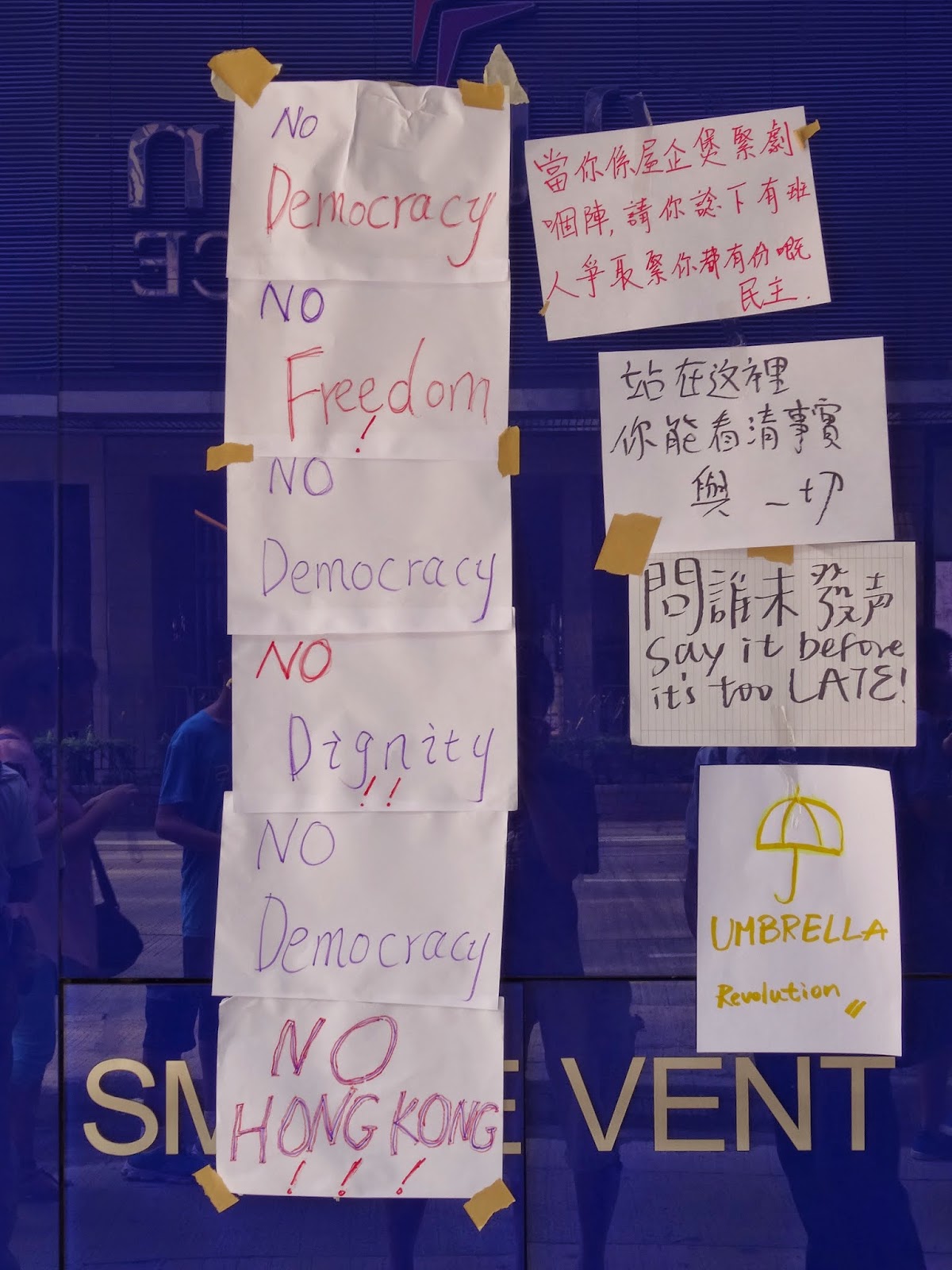 Not long from now it'll be Monday morning -- when, according to Hong Kong's unpopular, unrespected and untrusted Chief Executive, the roads currently occupied by participants in the Umbrella Revolution (or, perhaps more accurately, Umbrella Movement, since they actually don't want a revolution, "just" democracy) need to be cleared in order to let "normal life" resume.

In the first hours after his warning was issued, there was strong defiance, as particularly evidenced by the huge crowd that assembled in Admiralty last night.  And as Sunday turns into Monday, there still are a significant number of protestors unwilling to give up the fight (or even withdraw for the time being to fight another day) -- this despite there being serious fears once again of violence being used against them (by the police as well as Triad-infested anti-Occupy groups) .

If truth be told, for much of today, the sense I've been getting is that the protests may be winding down (or, at least, have passed their peak); with my seeing with my own two eyes that the protest area in Causeway Bay has become quite a bit smaller and the crowd in Admiralty being quite a bit smaller this evening than it was last night, though still pretty sizable.

I will admit to feeling some sadness descend upon me today; this not least upon observing how indifferent (if not actually hostile) many people, including in the part of Hong Kong where I live, appear to be to the Umbrella Revolution -- and when considering that no substantial concessions have been made by the embattled authorities as yet.

But while spending time in Causeway Bay this afternoon -- and, even more so, upon observing the still buzzing scene at Admiralty this evening -- I also was provided with reminders that what has been shown full well this week is how Hong Kong's pro-democracy movement has way more supporters and endurance than anyone (even the likes of Benny Tai and Joshua Wong) ever realized.

The pro-democracy genie has been let out of the bottle.  And I believe that even if Occupy Hong Kong looks like it's gone tomorrow or at some point in the very near future, the populist movement that has already had quite the impact on the hearts, minds and souls of large numbers of people is well capable of re-forming and regrouping again at will.
Posted by YTSL at 11:59 PM

I doubt it but I can always hope. Look what happened after the Tianamen incident (using live ammo on protesters).

Most HK people care about making money more than their freedoms. Also most HK people (or PRC Chinese) would NOT risk their lives if it saves another life.

why do you think organ donation rates are so low in HK and in mainland china?

Yes, we can always hope. Re after the Tiananmen incident: I think part of it is that some people have short memories, and others believed the CCP had changed. (And yes, there also are those who, of course, don't care just as long as they make money and those who are plain ignorant.)

I'm not sure about "most HK people care about making mone more than their freedoms", etc. though. Re organ donation rates: the impression I've had is that it's something to do with superstition and religious beliefs.

At any rate, I think one major point that the Umbrella Movement has revealed is that there are way more Hong Kongers willing to stand up for freedom, democracy and Hong Kong than hitherto was realized.

I have been following the Umbrella Movement on Webs of Significance and elsewhere with diminishing hope and increasing apprehension. One hopes for the best.

One thing that the CCP leadership most likely learned from June 4, 1989 was not to issue live ammunition. Rubber bullets or "plastic baton rounds"--both invented by UK forces and used in Northern Ireland in the 1970s--are current weapons of choice that have been used from Ferguson, Missouri to Gaza.

It is possible even for those taking orders from Beijing to clear an area while inflicting significant pain and injury on those being dispersed but without leaving bodies on the streets.

An excellent book (not that this is the time to dig into scholarly texts on political violence) is "Why Civil Resistance Works: The Strategic Logic of Nonviolent Conflict". If nothing else it shows that there are different ways of confronting autocratic state power and it is possible for democratic forces to bring about real change.

YTSL, I hope you will remain safe and continue to be a resident in a free Hong Kong.

The stereotype of Hongkongers caring only about making money is long past its sell-by date … if it were ever true.

Every extra day and night, hour and minute that the protests go on for has been beyond expectation -- and have added strength to a political awakening that I believe cannot be erased from people's minds.

They may drive people away - or convince them to withdraw from the protest areas. But I don't think they can suppress Hong Kong's people forever.

And yes, I do hope I'll be happily living in Hong Kong for some time to come.

Having immersed myself in news reports of the situation in Hong Kong - among other things, the protests have apparently widened a generational gap. Most people want to get on with their lives, but the younger students are worried about what their futures lives are going to be like. The last thing the protestors should do is alienate local merchants who are losing business.

As I see it, there will probably be no substantial changes in the near future. The Mainland Elite will maintain their lucrative grip of cronyism-power; their counterparts, the Hong Kong tycoons, will flourish in their financial smugness...Meanwhile, many local residents and small businesses will continue to be squeezed by escalating rents. "And so it goes", indeed.

I don't see so much of a generation gap as a class divide. The impression I get is that there are old as well as young supporters and participants of the Umbrella Revolution/Movement -- but the majority of them do look to be on the more educated side of Hong Kong.

Re the "local merchants" who are losing business: allow me to play the cynic here -- but it seems to me that the ones who've been the most worried are those who see their primary customers as those people coming over from the mainland during Golden Week. Put another way: it's those businesses in places like Causeway Bay and Mongkok who took the place of those that catered to the locals as a result of rent increases that came in part because of these areas increasingly being favored by mainland shopper-tourists!

And FWIW, there are reports in such as the SCMP about some shops in the vicinity of the protest areas having actually profited -- not just lost only a little. I think one store's owner talked about how the amount of bottles of water he's sold in the past week has been really high and profitable!

Thanks for taking the time to state your further comments about the situation in Hong Kong - it does give me deeper insight via the "you are there" nature of your reportage...If the words and images of your recent Japan trip settle into your mind in the form of a blog, I would look forward to reading it.

Thanks for reading -- and re my Japan trip: I definitely want to blog about it (and share many of my photos, including ones featuring a certain Puppet Ponyo) and hope it won't be long before things feel more "normal" and calm in Hong Kong, and thinking of such as vacations won't feel so frivolous!