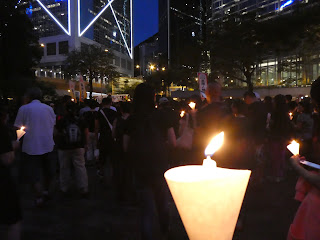 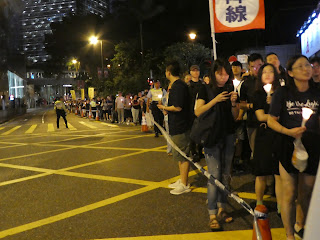 In the company of thousands of others, I walked candle in hand
from Chater Garden to the China Liason Office 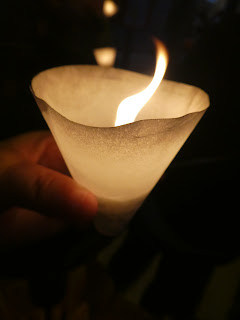 It may not be an eternal flame but it's been
captured for posterity by my camera
Earlier today came news that the ashes of the late Liu Xiaobo were scattered at sea in a move widely seen as the Chinese government seeking to deny those who loved and admired him a place of pilgrimage.  For many people, it further confirmed the Communist Chinese regime's heartlessness and I totally would not be surprised if it angered people and gave a number of Hong Kongers (further) motivation to turn up for this evening's candlelight march in memory of the 2010 Nobel Peace Prize winner.
Arriving at Chater Garden half an hour before the march got going, I was surprised to see this space get filled to the brim by the time the assembled crowd began moving out along a designated route that would take us from Central through to Sheung Wan all the way to the China Liason Office in Sai Ying Pun.  And while I normally would be able to complete that walk in less than an hour, the fact that I was walking along with thousands of others -- and consequently subject to crowd and traffic control by the police that ensured that there'd be lots of stops and starts along the way -- made it so that I didn't get to the (temporary) memorial space set up for Liu Xiaobo in front of the China Liason Office until close to three hours after I began my journey.
So long did the candlelight march take that my candle got way too short and its light burned out just before I rounded the final corner to the march's designated end point.  Also, I have to admit that my candle's flame was snuffed out two times before then; no thanks to the strong breezes that occasionally blew our way but were no way the worst bits of weather that we had to deal with -- instead, that'd be the rain that I initially dismissed as mere showers before it got to absolutely pelting down as my group of marchers stood waiting to pay our respects before we concluded our march.
In retrospect, I find it symbolic that the candle I lit for Liu Xiaobo was not able, like him, to fully complete its planned journey while alive -- but, hopefully, still may be able to achieve its goal with the help of another.  As for the downpours this evening: I see the rain as the tears shed by heaven for a highly principled individual who had the misfortune of living under a regime whose rulers felt so threatened by his ideas that they decided to view him as a criminal rather than patriot.
In their treatment of Liu Xiaobo (and also his wife, Liu Xia), the Communist Chinese government have shown how heartless and despicable it is.  Shame on it!  And may Hong Kongers keep on opposing and resisting its attempts -- be it using soft power, what are effectively monetary bribes or menacing intimidation -- to turn Hong Kong into just another Chinese city, where such as the freedom to protest and the freedom to be critical of the government (in an effort to make it better) is no longer allowed.
Posted by YTSL at 11:59 PM