Snowy views of Hikone Castle and its expansive grounds (Photo-essay)

Although there are many castles to be found in Japan today, only 12 have the distinction of being considered original castles.  Of these, I've visited UNESCO World Heritage-listed Himeji-jo, Bitchu-Takahashi's Matsuyama-jo (a mountain castle that's the highest fortress with an existing main keep in Japan), Matsue Castle, Matsumoto Castle (the first sight of which caused me to gasp out loud -- so stunningly beautiful is it) and, on my most recent Japan trip, the castle that is the pride and joy of Hikone (and where Hikonyan supposedly officially resides).

While it's not a mountain castle like Bitchu-Takahashi's Matsuyama-jo, Hikone Castle's main keep does sit atop a hill amidst expansive grounds that includes a stroll garden (Genkyuen), a day palace (that's now home to the Hikone Castle Museum) and various other structures, including the only stables still standing in a Japanese castle.  Even though it was on the cold (and snowy!) side on the day I visited, I still felt compelled to spend many hours wandering about in the castle grounds and I must say that Hikone-jo's white walls really appear very photogenic amidst a background of equally white snow and bright blue skies... 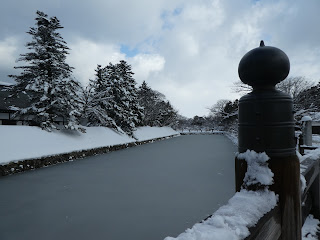 I don't think I've seen a moat all frozen up before
until the day I went and visited Hikone-jo... :O 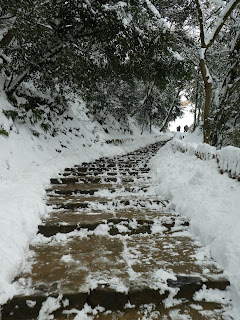 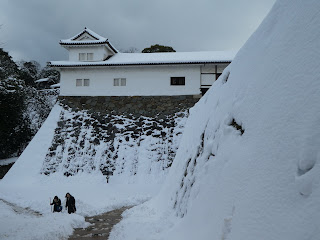 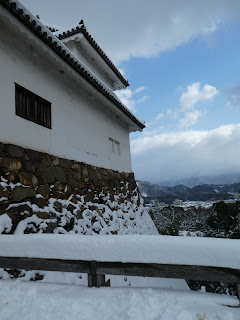 This photo gives an idea how thick
the snow was when I visited! 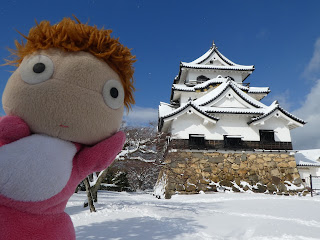 Puppet Ponyo points to the main castle keep behind her! :) 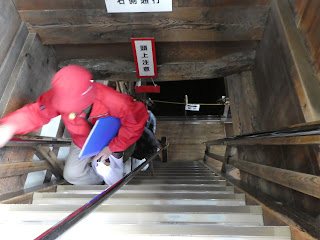 The staircases in this three-storey original castle keep
are on the distinctly steep side... 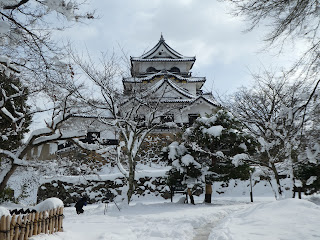 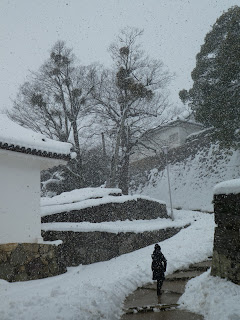 The snow came pelting down once more
as I bade farewell to Hikone-jo...
Posted by YTSL at 8:40 PM

how high up are you. There still plenty of snow up in North Idaho.
Coffee is on

For the purposes of this post, I think you are interested in the location of Hikone, not Hong Kong. Also, do you mean sea level or longtitude? If the former, Hikone's about 95 meters above sea level (so, not high at all). If the latter, Hikone's 35.2745° North.

You depict a winter's scene that is so "expansive" and atmospheric, I find myself running my cursor over these still frames, creating a brief movie. And Ponyo expresses the invigorating rush a traveler would feel exploring this area.

I love the idea of your creating a brief movie with my photos, and your continued appreciation and understanding of Puppet Ponyo's actions! :)