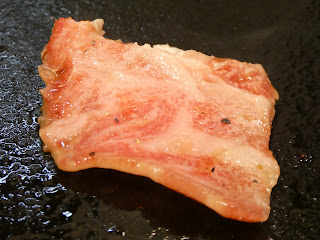 A beautifully fatty slice of Omi beef :b 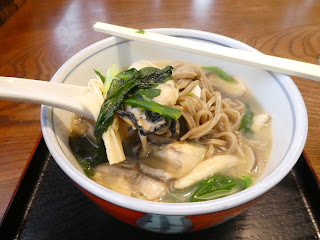 A bowl of delicious oyster soba in soup! :)
Although I had heard of Hikone Castle and Hikonyan before I set foot in snowy Hikone, I didn't know a thing about what this part of Japan was famous for food-wise.  But after I learnt via from a pamphlet distributed by the city's tourist information center that this area is famed for a particular brand of wagyu that actually is the oldest in the country, I knew I couldn't leave Hikone without trying some Omi beef!
Because it was pretty hard to walk around in the city due to there either being thick banks of snow on the pavement or cleared bits that were actually super slippery because what bits of snow on them had melted and then refrozen as ice, I stuck to dining close to my hotel.  Fortunately, because my hotel was close to the train station and, as is often the case in Japanese towns and cities, there are a number of restaurants and bars located close to the train station, I actually did manage to find a couple of restaurants that served the vaunted Omi beef.
Although one of them was a specialist beef place, I actually went instead to an izakaya for dinner as I was in the mood for some beer as well as Omi beef, and also wanted a bit of variety on the food front.  At Izakaya Hikoichi, I chowed down on sticks of yakitori (with the tsukune (chicken meatball skewer) proving to be particularly tasty) and tsukemono (Japanese pickled vegetables) along with a plate of Omi beef and side vegetables that I was a bit surprised to learn that I would be grilling myself on a portable teppan plate.
Almost needless to say, the Omi beef was by far the best part of my dinner -- and I must admit to wishing in retrospect that I had gone to the Omi beef specialist place.  Ah well, next time -- I'm in Hikone, that is, because I somehow didn't feel like having beef for lunch the next day and opted instead for a bowl of oyster soba in soup at a modest noodle restaurant on the same street!
I think that because I was feeling so cold after walking back to the vicinity of the train station and my hotel from Hikone Castle and spending hours exploring the castle, including its heater-less main keep which one had to walk about in shoeless, a bowl of hot noodle soup really was calling so very much to me.  And because all those oysters I ate in Hiroshima hadn't made me "oystered out", I zeroed in on the item on Yachiyo's menu that had oysters as well as noodles and soup in it!
Because the dish was around the 500 Yen (~HK$37 or US$4.67), I wasn't expecting it to have as many oysters as it did.  Even better was how juicy and plump those oysters were, and how oyster infused the soup/broth was.  So yes, I not only ate everything in the bowl but I drained every drop of that super delicious liquid too!  Unlike Hiroshima, Hikone isn't a place one associates with oysters.  But that oyster dish that I ate in that city on the banks of Lake Biwa really hit the spot.  Oh, and the soba in that bowl really wasn't bad at all too! ;b
Posted by YTSL at 11:11 PM

Haha I would have chosen the beef specialist place.

Omi, Matsuzaka, Kobe. Which one do you prefer most after tasting all three?

I'm sure you would have... I'm a foodie but I think I'm more casual about dining options in Japan than you! And on a related note: I have to say that I'm not picky about wagyu: i.e., I've not encountered any true wagyu (as opposed to, say, "Australian wagyu) that I've not yet liked, even loved! :)

I really don't think you're more casual than me ... casual eaters don't revisit Hiroshima for a trip to Kanawa :p

You come across to me as being more willing to pinpoint restaurants you want to eat in towns and cities that you are visit, and are willing to make advance reservations at them. I tend to be a bit more casual in that I aim to try regional specialties wherever I go but without their necessarily having to be at a particular restaurant. But I think we can agree that we're both foodies who like to do our research, and probably much more so than many other of our fellow travellers! ;b