Thoughts on the past, present and future on the way to and at Hiroshima Castle 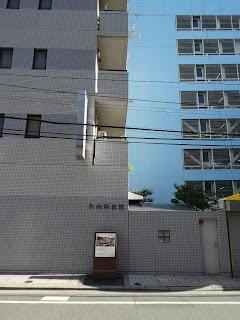 The atom bomb hypocenter in Hiroshima 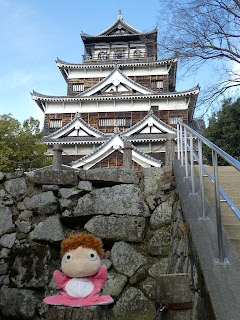 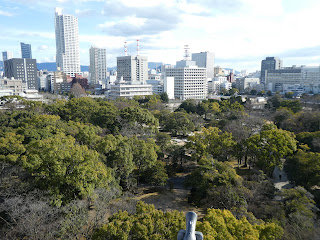 View from the top floor of Hiroshima Castle
showing how rejuvenated the city is
After my enjoyable oyster lunch at Kanawa, I decided to head over to Hiroshima Castle; this despite my tending to be an original castle purist who consequently eschewed the chances to visit the reconstructed castles in Kokura, Kanazawa, Okayama and Takamatsu when I spent time in those cities.  One of my reasons for doing so is because, well, there's really not that much in Hiroshima that survived the atom bombing of the city on August 6th, 1945 to check out.  Another is that, as it so happened, I happened to have had lunch very close to the Peace Memorial Park and after doing so, I felt like going to visit an edifice whose rebuilding in 1958 can be linked with the city's revival.
On the walk over to Hiroshima Castle, I passed by the atom bomb hypocenter whose site is marked with a stone information plaque that one could easily pass by without much of a glance as it's so modest in size and overall appearance.  It's one of those great ironies that the atom bomb was dropped right above a hospital -- which was completely destroyed by the blast but has since been rebuilt and is operating again.  And here's what one learns over and over again in Hiroshima: that terrible devastation occured there but life actually has gone on, and the city has actually risen like the metaphorical phoenix from the ashes.
In the grounds of Hiroshima Castle, I came across the ruins of the Imperial General Headquarters and obeyed an urge to give it a kick.  Much to its credit, Hiroshima does not hide the fact that one reason why it was chosen to be the atom bomb target was that it was a militarily important site; with the Imperial Japanese Military's headquarters being situated in the city in addition to the country's largest naval base and arsenal being located nearby at Kure.  For my part, when looking at the site where so much violence and deaths were planned, and which came to bring about such terrible retribution (including on so many civilians resident in the city), I must confess that my emotions got the better of me.
Also within the Hiroshima Castle grounds are the ruins of a war office communications bunker where student aides had been stationed along with military men.  Standing by there, one is more inclined to mourn the dead there as victims -- and not just because there's a shrine to their memory there.  Rather, it's that a good number of the people there were civilians and so very young.  Indeed, it was a girl who was just 14 years of age at the time who was the first to emerge from the semi-underground bunker after the atom bomb was dropped, be witness to the destruction all around her and sent out the first radio report of the devastation to the outside world.
After all this, a visit to Hiroshima Castle's main keep can feel rather anti-climactic; and this all the more so when one sees how ordinary looking its concrete interior is.  To be sure, there are some interesting displays and videos about the samurai era of the castle's and the city's history within.  But, in all honesty, they're not all that awesome and can't really make up for the building's lack of historical atmosphere, never mind the kind of aesthetic beauty that the likes of Himeji-jo and Matsumoto-jo have in spades.

For all this though, I'm glad that I did go to Hiroshima Castle, into its main keep and all the way up to its top floor -- because the views from up there really show how rejuvenated the city is.  This development gladdens my heart for many reasons, including it giving me hope that humans really can overcome great adversity and also learn from past mistakes in a way that can benefit future generations.
Posted by YTSL at 11:44 PM

You and Puppet Ponyo conclude an impressive year of travel by returning to Japan again. This Hiroshima entry is a sensitive treatment of an important event that doesn't have to be all sadness. For instance, I keep a photo of Sadako Sasaki downloaded on my laptop. I look at it often because her face convinces me of the survival of human spirit amidst cataclysmic events.

Actually, this recent Japan trip doesn't conclude but, instead, kicks off what I hope will be another year with a good measure of travel! Thanks though for your appreciation of this Hiroshima post. The atom bombing of Hiroshima was a terrible thing but I'm glad to say that the city really has dealt much better with this event than many people could have expected and even hoped for.