A visit to the rural sake brewery that makes Dassai! (Photo-essay)

Back when he was the Asahi Shuzo Company's vice president, I met Kazuhiro Sakurai when he visited Sake Bar Ginn while he was on a stopover in Hong Kong.  Over a shared bottle of Dassai Sparkling 50, we chatted about subjects ranging from the films of Studio Ghibli to how one can get Hiroshima-style okonomiyaki topped with oysters.  And at one point in the conversation, the man who's now the company president told me that if I ever did get to Hiroshima, I was welcome to visit his sake brewery, which is located in the neighboring prefecture of Yamaguchi; something I duly proceeded to do on my trip to Japan last month!

It took two trains (including a very local one with just one carriage and a driver who, at some stations, would do double duty collecting the fare from passengers getting off his train) to get from Hiroshima to Suo-Takamori, the nearest train station to the brewery that I hadn't previously realized is not only located in a really rural part of Yamaguchi prefecture but fairly high up in the mountains.  But it was so totally worth the effort to get there to see how the sake that -- as I told Sakurai-san -- I've drank thousands of liters of gets made.

Adding to the experience was my getting extended incredible courtesy and serious VIP treatment: as in I got picked up from (and later dropped off at) the train station, given a personalized tour of the place, and met Sakurai-san again, this time over on his home turf.  Oh, and after I toured the brewery facilities, I also spent some time at the Dassai Brewery Side Store, where I got to not only sip glasses of the familiar Dassai 23 but also the even more amazing Dassai 23 Centrifuge and simply incomparable Dassai Beyond! 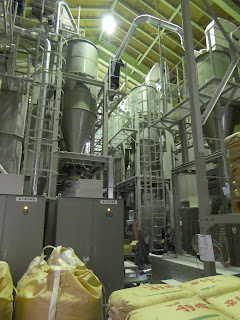 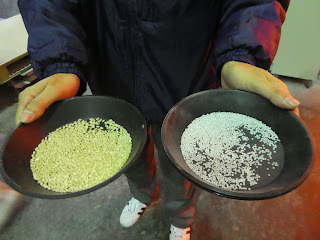 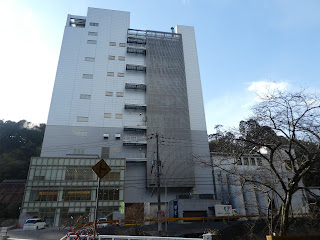 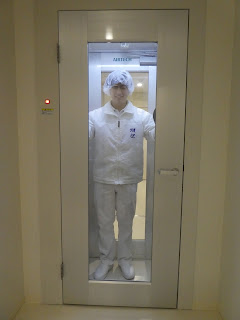 Before entering the working section of the main brewery,
one needs to put on protective clothing and spend time in an
air shower room to reduce the risk of contamination of the facilities 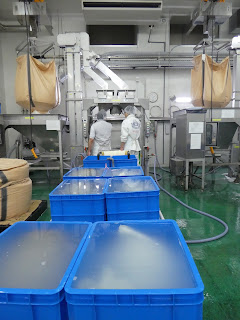 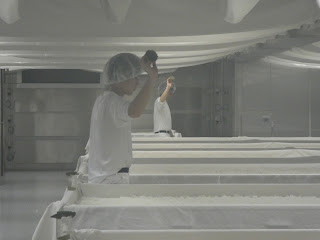 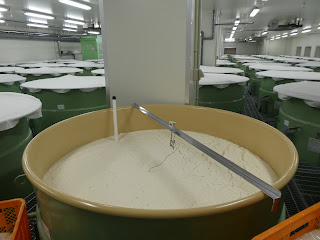 I also thought it very cool to be allowed into the vast room
where hundreds of large vats filled with steamed rice, koji
and water are mixed to make mash that's left to ferment 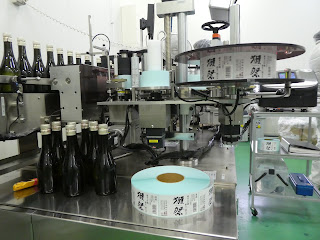 Filled bottles of sake about to have the famous
Dassai label affixed onto them :)
Posted by YTSL at 11:38 PM

Ah, Dassai 23 Centrifuge...... Lucky you. I have never tried that. That is sort of pricy for me. All I could imagine is that it is more than the 23. Must be a super elegant one.

I remember the last time I had the 23 a few years ago was with Chiu Chow food. Believe me, it works.

The Dassai 23 Centrifuge is a pricey sake but it's still not as expensive as the Dassai Beyond! So it was a bit of a shock to get treated to glasses of those as well as one of the Dassai 23 by the Dassai brewery folks!! And after having tasted them, I would say that, if given a chance, you should try those sake... if possible, by glass rather than buy the bottle! ;b

And yes, I can imagine the Dassai 23 working okay with Chiu Chow food. About the only food that I am skeptical about (junmai daiginjo/junmai ginjo/junmai) sake going well with is that which is spicy -- like Indian, Thai, etc.

For spicy stuffs, I would play save with beer, some sparkling wines, and pinot noir wine (blanc or rogue will both do).

Once an assistance of a New Zealand winemaker told me during a chat around her stall that she found out their NZ Pinot Noir suited very well with spicy and numb dishes. I tend to agree after experimenting on it for multiply times with pinot noir wines from Alsace, New Zealand and South Africa.

I am still trying to match up the spices (not necessary hot & spicy) of Indian food with alcoholic drinks. But one could safely go by Masala tea of sort, even without sugar. The problem with Indian stuffs is there is close to an unlimited combination of stuffs. More experiments and some imagination needed.

I believe I had seen the Dassai Beyond on display last year in a Sake Fair of sort, but I could not recall its list price. I looked it up and found some web shops listed it at around USD750.- for a 720 ml bottle. Yikes. That's the price of an extra-premium aged vintage champagne.

Did you pick up your next couple years' supply while you were there? :)

It was indeed a pretty incredible experience. Actually, I came away with just one 720ml bottle of Dassai 23, albeit along with a Dassai-infused cake, Dassai cookies, Dassai soap and lots of great memories. :)