Nara's Wakakusa Yamayaki, the festival that involves a fireworks display and also the burning of a mountain! (Photo-essay)

Although my first impressions of Hikone were on the cold (and thus not particularly welcoming) side, I actually enjoyed much of my time in this Shiga Prefecture castle town and ended up rueing my not being able to spend more time in the area.  But there was an event taking place over in Nara that evening that I didn't want to miss; one that involved the setting afire of a mountain that loomed over the old capital city and which has been taking place since ancient times.

The Wakakusa Yamayaki is an annual festival which takes place these days on the last Saturday of January.  Religious ceremonies involving officials affliated with Todaiji, Kofukuji and Kasuga Taisha take place earlier in the day, including the bringing of a sacred flame over to light up a bonfire in Nara Park, some of whose flames are then used in the ritualized burning of Mount Wakakusa.  But the actual setting afire of the mountain, and also the grand fireworks show that precedes it, take place only after dark.

More than incidentally, it's quite the experience to stumble around a largely dark Nara Park, trying to find a good spot to see the pyrotechnics and general fiery spectacle, with a large crowd of people, with the possibility of one stumbling not only on uneven ground but also over some wild deer!  Happily, the festival attendees seemed to generally fare okay; with perhaps the greatest mishaps involving people losing a glove or two since on my way back to town afterwards, I saw an uncommonly large number of those items of clothing lying about on the ground! ;b 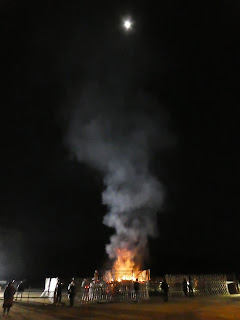 The Kasuga Bonfire, where one can receive blessings
from Shinto deities when warming oneself with its fire 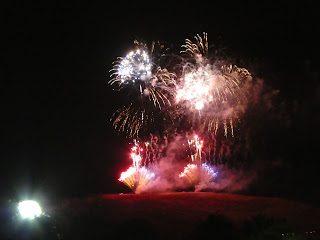 Hanabi (fireworks) atop a mountain! 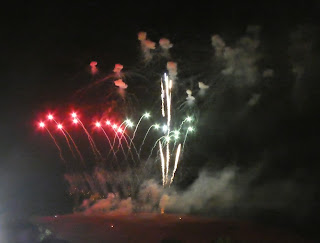 Music accompanied these visuals, and so too did
oohs and aaahs from the crowd ;) 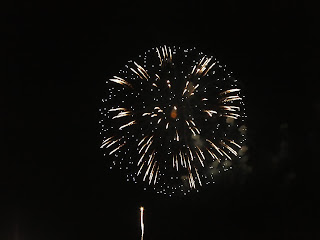 I got reminded that evening that fireworks really can be beautiful 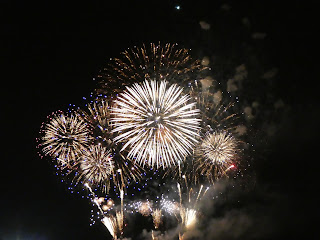 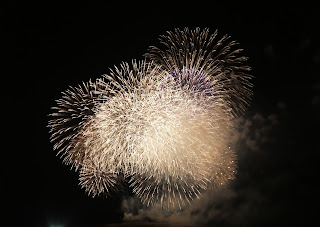 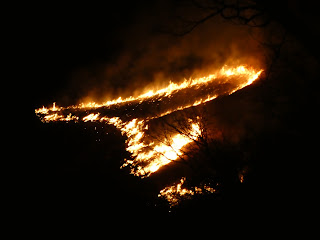 Then, a few minutes later, the mountain burning began in earnest! 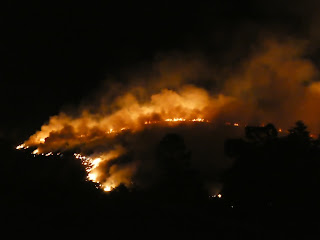 This dramatic sight can be seen from many miles away,
but the smell of burning didn't carry as far as I expected!
Posted by YTSL at 10:20 PM