One month ago today, I began my most recent visit to Japan.  The first few nights, I stayed at a city I had been to the previous October: Hiroshima.  But on the fifth day, I packed my bags and took the train to snowy Hikone -- and ended up spending the night there rather than head back south to less snowy climes on the next train out!

Although things looked pretty bad (as in blizzard-y!) at first, I decided that since I should make the most of my being there and, also, that I should actually go and try to see some of the town rather than just hunker down in my cozy hotel room or an inviting izakaya (though trust me when I said that I did do a bit of that too!).  Looking back and when looking at the photos I got of an uncommonly snowy Japan, I'm glad I did that; this not least because a thick layer of snow really does seem to make even scenes that might otherwise be rather everyday look pretty special... 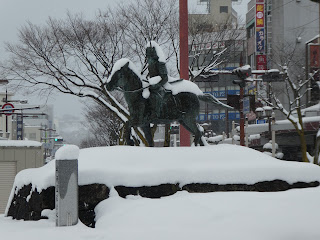 Snow-covered bronze statue of Ii Naomasa, once lord of Hikone 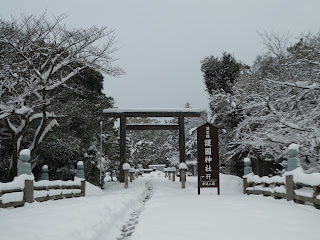 Not your usual view of a jinja (Shinto shrine) 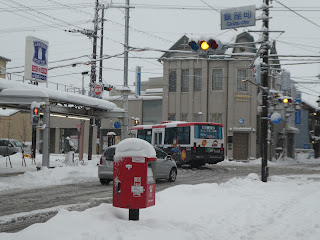 So much more snow on the ground (and atop roofs and post boxes)
than cars and people out on the streets in the town center! 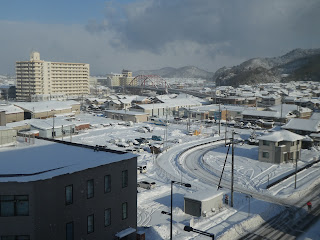 Add a bit of blue sky and sunshine and the overall perspective
quickly becomes significantly cheerier! :) 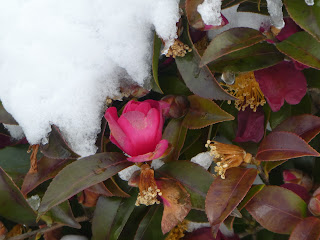 The plants may be snow-covered but some of them
still had their flowers! 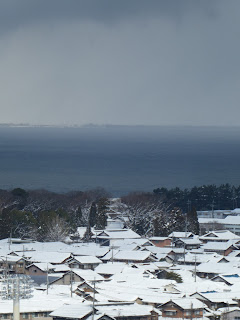 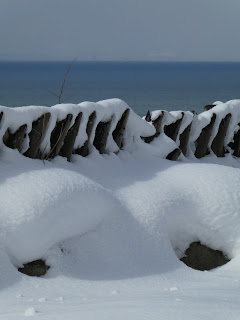 I got closer to Lake Biwa on my very first visit to Japan
back in 1982 than this time around but still could
appreciate its beauty on this recent trip :) 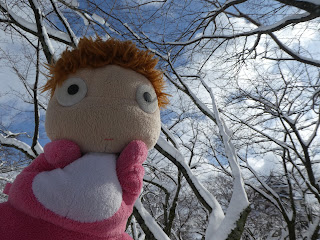 Puppet Ponyo adds welcome color to the snowy landscape
(along with the blue portions of sky) :b
Posted by YTSL at 11:39 PM

Most definitely -- and a whole photo-essay worth too! :)