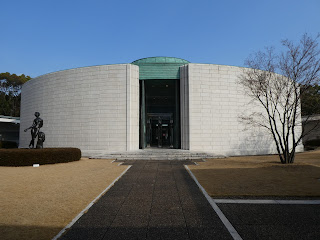 Within this building can be found artworks by masters
such as Renoir, Van Gogh, Picasso and Rodin 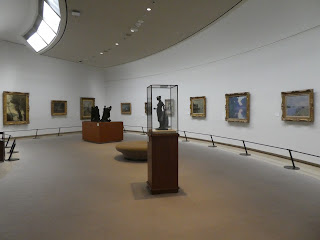 And yet the Hiroshima Museum of Art doesn't seem to
attract all that many visitors! :O 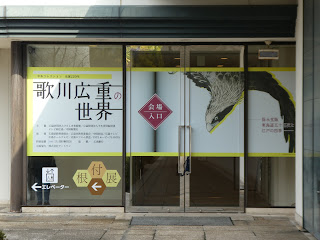 The special exhibition that was the number one reason why
I went and visited this particular museological establishment!
On my first ever visit to Hiroshima last October, I made the obligatory visit to the Hiroshima Peace Memorial Museum and Peace Memorial Park.  I also stuffed myself with Hiroshima-style okonomiyaki and other delicious foods, and visited the restored (post Atom bomb devastation) Shukkeien.  But it wasn't until my second visit to this rejuvenated Japanese city that I went and checked out one of its three (major) art museums.
When deciding between which of them I'd (first) visit, the Hiroshima Museum of Art easily won out over the Hiroshima Prefectural Art Museum and Hiroshima City Museum of Contemporary Art once I discovered that there was a special exhibition on there of well-known works by Hiroshige, perhaps the most famous ukiyo-e artist ever other than Hokusai; and this despite the admission fee to this private museological institution having been increased by 300 Yen because of the special exhibition taking place to 1,300 Yen (making it more than thrice as expensive than that for the Hiroshima City Museum of Contemporary Art and around two and half times more expensive than that for the Hiroshima Prefectural Art Museum).
In view of my ending up spending three and a half enjoyable hours checking out the offerings at the Hiroshima Museum of Art, I actually consider that to be money well spent.  Make no mistake: Hiroshige's Fifty-three Stations of the Tokaido series of woodcut prints are really something to behold, as is the master's Four Seasons in Edo.  The detail in them is amazing, and many of the works really are things of beauty.  And the icing on the cake with regards to this particular exhibition is that it details and offers up examples of the variations between the first and later, altered print editions of same-titled works in the series!
On a personal note: it was fun to see 18th century views of parts of Japan that I've visited in this century, notably Hakone and Kyoto.  I also thought it rather cool to discover via the Hiroshige art exhibition that a Japanese friend's hometown -- which she reckons so few people outside of her native country know about that it's easier to just say that she's from (relatively) nearby Yokohama instead -- actually is one of the historic 53 stations of the Tokaido!
Also on temporary exhibition at the museum were netsuke from the collection of Prince and Princess Takamado.  I first learnt about these miniature sculptures first created in 17th century Japan that functioned as pockets for wearers of kimono and other pocket-less traditional Japanese garments while at college in Wisconsin because its art museum had a sizable netsuke collection.  And it was interesting to find out at this art museum in Hiroshima that the artistic values of netsuke are more greatly appreciated outside of Japan than within it.
Something else that I found interesting at the Hiroshima Museum of Art is that the jewels -- and bulk -- of its permanent collection appears to be Western rather than Japanese artworks.  And while a good many of these pieces could be said to be minor works of the featured artists, the individuals concerned are none other than the likes of major names such as Claude Monet, Edouard Manet, Auguste Renoir, Auguste Rodin, Vincent Van Gogh, Henri Matisse and Pablo Picasso, to name just a few!
When visiting the likes of this museum and the Ohara Museum in Kurashiki as well as the National Museum of Western Art in Ueno, Tokyo, it seems to me that there really is a major appreciation for Western as well as local art in Japan.  To be sure, on my visit to the Hiroshima Museum of Art, the rooms where Western art were pretty deserted while those highlighting traditional Japanese art had more people in them.  But I think it may actually be more a reflection of the Western art being on permanent display (and have been seen before by many a Hiroshima-based art lover) while the works of Hiroshige and the netsuke are/were available to be viewed at this venue for only a finite amount of time! ;b
Posted by YTSL at 11:20 PM

I'm quite fond of Hiroshige and recall a family friend of mine who was rather obsessed, seeking out and visiting private and museum collections of his work in the U.S. Sounds like a nice mix of Japanese and Western works at the Hiroshima Museum of Art. For now (alas) I'll live vicariously through you and your blog... : )
~Joy

Sounds like the perfect time to visit with the Hiroshige exhibition on. Frankly I'm surprised that you're returning to Hiroshima so soon ... did you spend most of your time in Sanyo or did you split your time with Kyushu as well?

I'm sure you and your family friend would have loved the Hiroshige special exhibition at the Hiroshima Museum of Art. And thanks for continuing to check my blog and I am happy when you can get pleasure from it.

Do you travel to New York or Boston much these days? I'd imagine that they will have some Hiroshige works on display at the Met and Boston Museum of Fine Arts.

It's indeed rare for me to return so soon to the same part of Japan. But I really do like Hiroshima's vibe... and its food! But, yeah, I did spend time in other parts of Japan -- Kyushu and still other parts of Honshu, including as far away from Hiroshima as Hikone! :)