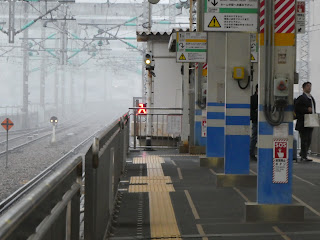 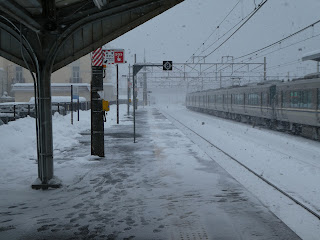 I found the snow to be really pelting down and
settling on the ground the day that I went over to Hikone! 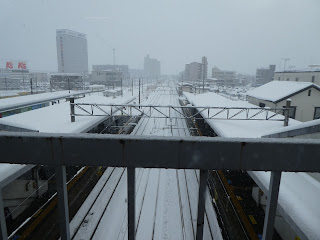 Not a scene I expected nor wanted to see on a Japan visit!
For the first twelve years of my life, I only ever saw snow in picture books, on TV or in movies.  On a visit to England a few months after my thirteenth birthday though, I saw snow for the first time and was pretty ecstatic to have had this then exotic -- to me! -- experience.
After I moved to England to attend boarding school though, snow became less of a thrill and more of a bother, especially after it melted and then re-formed into super slippery ice.  And the four years I spent at college in Wisconsin (aka the Siberia of America) definitely made me like the cold white stuff even less, with the subsequent years I spent in Philadelphia -- during which the city would regularly run out of salt for the roads in winter -- making it so that by the time I left the USA on July 4th, 2003, for far warmer climes, it would have been perfectly fine by me if I never ever saw snow again!
Since then, I've actually been pretty successful in avoiding seeing snow for the most part.  Indeed, it wasn't until 2015, on a May visit to Norway, that I came across -- and even tramped on -- the cold white stuff again!  And after a brief encounter with falling snow while on transit at Munich airport later that same year, I had not had more encounters with that which can be so pretty to look at but not all that great to be in until my trip to Japan last month!
I won't lie: the first time I saw snow falling in Japan (upon coming out from Hiroshima's Okonomimura. where I had just enjoyed a delicious lunch of Hiroshima-style okonomiyaki), I let fly an expletive -- and it wasn't because I was excited by the sight of the cold white stuff but, rather, because I actually was horrified by it!  But after I realized that the falling snow wasn't sticking onto the ground, I calmed down somewhat -- to the extent that the knowledge that snow was falling did not dissuade me from going ahead and journeying by shinkansen later that day to Osaka Funassyiland (and back later that evening) in order to get a 60cm Funassyi!
Over the next few days, as I saw more snow fall but almost never accumulate on the ground, I relaxed even more.  Indeed, I could be accused of having become rather blasé about the uncommonly snowy conditions that the Japanese media appeared super excited about; and this especially when the snow that I saw falling on my way to the Asashi Shuzo brewery up in the hills of Iwakuni prefecture also didn't seem to be sticking much at all to the ground.  Thus it was that I wasn't all that bothered when it began snowing once more my train journey from Hiroshima to Hikone, one that involved my switching trains at Shin-Osaka and moving from the Chugoku region over to the Kansai region.

Some forty minutes after the second train of my journey passed Kyoto though, I began to see landscapes that were distinctly snowy in nature, with the snow getting thicker and thicker the closer I got to my destination that day.  By the time the train rolled into Hikone Station, I was thinking that some of the winter scenery I was passing could easily be mistaken for Siberia's rather than Japan's!

I have to admit: there was a part of me that wanted to get on the next train out of Hikone soon after I arrived in that part of Shiga prefecture; and this especially it wasn't just snowing when I got there but pelting down pretty heavily!  But after reminding myself that I had experienced similar -- and even worse! -- conditions in Wisconsin, I not only kept to my plan of staying the night but decided to go out and walk around in the town since I was there for a bit before going and getting dinner (and at least one alcoholic drink!) in a nice, warm izakaya in the evening!
As I tramped about in the snow, I got to remembering how slippery the not completely cleared paths can get, how wet snow actually is, how few people are keen to be out walking about when it's snowing heavily, and how bleak but also beautiful it can turn landscapes into.  In addition, long before I completed my walk around Hikone town, I was thinking how happy I am that I no longer live in a part of a world where snow falls during winter but also how cool it actually was -- metaphorically that is, not just literally! -- that I was getting to see truly snowy conditions for the first time ever on a visit to Japan! :)
Posted by YTSL at 11:59 PM

This past year it was a pleasure to travel vicariously on a WOS magic carpet of words and Lumixified images. Highlights of that journey would first be the luminous Borobudur-Prambanan and Ipoh blogs, including the beansprout chicken which I have vowed to try in the future...Then it was on to the Seto Inland Sea, a region you revealed to have charming towns (including Tononoura, birthplace of your charming travel partner) and temples-shrines, background mountains, all which looked to be worthy of exploring. Also, I was introduced to Sento-kun, an unusual anthropomorphic mascot.

Favorite photos include: Ponyo beaming in all her traveler's glory, introducing Fish Hoek Beach...Another memorable photo is "View from the JR West Miyajima Ferry". This photo of a Japanese temple seen from the water, speaks to me of a journey to the eternal lure of the Far East...Look forward to reading about more journeys in the Year of the Dog.

Thanks for the seasonal wishes and happy lunar new year of the dog to you too! Thanks also for checking out my blog and the lovely comments you leave on it. I hope you (will) enjoy my Hong Kong posts as much as you obviously do my travel ones! :)

You can't freak out about snow! Sometimes it happens! I love it when it's so quiet when it's snowing... but yes of course I have to get the shovel out later!

It's one thing to encounter snow in daily life and another to encounter lots of snow when one's travelling! I generally do try to plan my trips abroad to coincide with good rather than bad weather -- or, at the very least, to avoid the rainy season and also heavy snowfall! Don't you?